Nike CEO: Our Company's Brand Is 'Of China and for China,' You Know 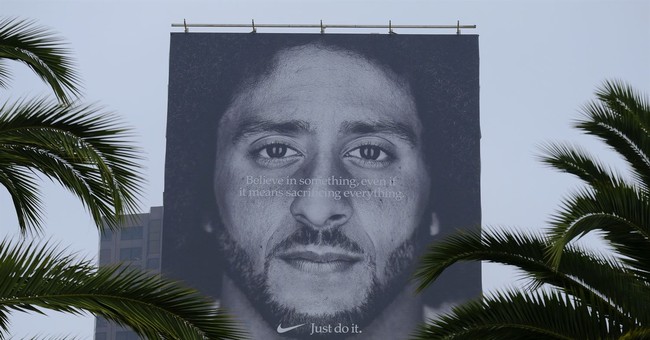 That's not a misquote, nor is it taken out of context. Nike's CEO (not Colin Kaepernick, despite his apparent veto power over product lines deemed to be too "offensively" American) made that statement on an earnings call last week as he downplayed a recent row in which his company suffered a public relations hit in China for not celebrating draconian forced labor practices in Xinjiang. Domestic competitors made human rights abuses a matter of national pride, stirring something of a consumer backlash against the American sportswear giant – which has bent over backward on multiple occasions to appease Beijing's sensibilities. They yanked Houston Rockets gear off of Nike store shelves, in solidarity with the regime, after a former Rockets executive tweeted in favor of democracy in Hong Kong, and they lobbied Congress against legislation cracking down on the aforementioned coerced labor regime. But Nike couldn't quite bring itself to cheer on neo-slavery, a "betrayal" that provided an opening for their "patriotic" Chinese rivals to gain a competitive advantage. But the company's future in China remains bright, John Donahoe explained, because Nike's brand is "of" and "for" the Communist country:

Nike CEO John Donahoe called the sportswear apparel giant a "brand of China" this week, following a fiasco it was involved in earlier this year over concerns about human rights abuses committed by the communist government.  During an earnings call this week, Donahoe explained that Nike had a long-term view of its operations in China, where it had been operating for about four decades. "We are the largest sport brand there, and we are a brand of China and for China," Donahoe said. "And the biggest asset we have in China is the consumer equity. Consumers feel a strong, deep connection to the NIKE, Jordan and Converse brands in China. And it’s real." Donahoe went on to say that the company intended to keep investing in its China operations as it reported better than expected revenues in its fiscal fourth quarter.

Donahoe made these comments the same week that Chinese authorities forced the closure of a newspaper in Hong Kong, a fresh and brazen escalation in the CCP's destruction of democracy in the former British colony:

Apple Daily, a popular newspaper in Hong Kong, has long needled Beijing with its rambunctious support of pro-democracy protesters, aggressive investigations of officials and lampooning of China’s Communist Party leadership. Now China has effectively silenced the paper — and along with it, one of its most defiant critics. Apple Daily said on Wednesday that it was closing less than a week after the police froze its accounts, raided its offices and arrested top editors, as the government’s escalating campaign against dissent takes aim at the city’s once vaunted media freedoms. The forced closure of Apple Daily struck a blow to the unique character of the city itself.

The paper churned out stories on celebrity gossip and lurid scandals, as well as hard-hitting political news and analysis, always with a decidedly antigovernment slant and an irreverence antithetical to what the Communist Party would allow in the mainland. Even in the face of advertising boycotts, assaults on its journalists and firebomb attacks, the paper persevered and thrived, remaining one of the most widely read newspapers in the city, living proof of the freedoms Hong Kong enjoyed despite its return to Chinese rule in 1997. When antigovernment protests erupted in Hong Kong in 2019, posing the greatest political challenge to Beijing in decades, Apple Daily was an unabashed supporter of the movement, even printing placards for demonstrators. But when Beijing moved to quash resistance to its rule in the city with a powerful and sweeping national security law that squeezed space for dissent, Apple Daily quickly became a key target.

The ruling Chinese Communist Party has actively lied about and covered-up crucial information related to the nature and origins of the COVID-19 pandemic, which has killed millions around the world, including more than 600,000 Americans. They've bullied and threatened anyone who's dared to ask questions, while shamelessly accusing the US military of starting the virus. The CCP is currently engaged in ethnic cleansing against minority Muslim populations in the west of the country, perpetrating what the US State Department has labeled a genocide. And the CCP machinery is systematically choking the life out of Hong Kong's democracy, in violation of an international treaty. Yet China is avoiding global pariah status due to its economic influence. Western companies – including some, like Nike, who position themselves domestically as woke warriors for social justice – want access to the lucrative Chinese market, and are willing to compromise or jettison their alleged "values" accordingly. Bari Weiss asks a disturbing question:

What happens in Beijing doesn’t stay in Beijing.  Here I’m not just thinking of of movie stars like John Cena groveling about calling Taiwan a country; or of NBA stars like Lebron James who claim the mantle of social justice but are go mute in the face of the world’s greatest threat to human freedom; or of powerful brands like Apple and Nike that market themselves as progressive but rely on forced labor. (This past week, as Apple Daily shuttered, the CEO of Nike said: “Nike is a brand that is of China and for China.”) I am also talking about the pandemic we’re still living through. It was China that lied to the world about the nature of Covid-19. It was China that disappeared scientists who tried to blow the whistle early on. In other words: we don’t need to live in mainland China to be affected by the policies and the decisions of the CCP. If the CCP is willing to do that to the world, if it is willing to swallow up a city of more than 7 million people in broad daylight, crushing the free press, crushing dissent, and jailing journalists, you have to ask yourself: what — or who — will come next?

It appears as though quite a few governments and global corporations aren't interested in thinking too hard about that, opting instead to pad their budgets and bottom lines with Chinese money. And for now, Nike's cynical strategy of playing progressive at home while raking in CCP money abroad seems to be paying off handsomely. I'll leave you with a question: How much might Nike executives be considering paying this person in a Kaepernick-style endorsement deal?

Stop playing with me pic.twitter.com/WLN3clqOCM

To be clear, this isn't the Olympian who has expressed a desire to burn the US flag on the podium. That's another one of our great patriots. But Berry's various "protest" stunts very much appear to fit the bill for what Nike is looking to communicate to American consumers – who may be becoming something of an afterthought for a brand that is "of China and for China," according to its leader.