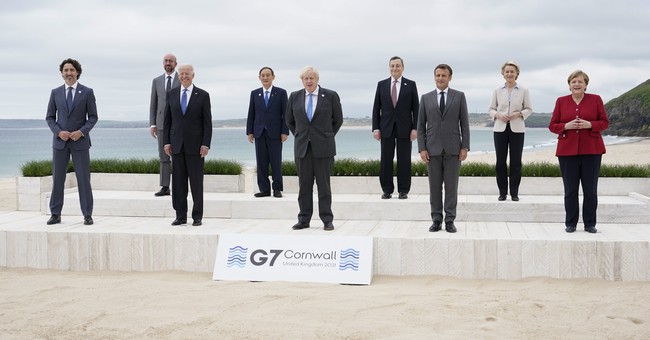 As Katie wrote yesterday, the leaders of the G7 announced their joint endorsement of a follow-up investigation into the origins of the deadly COVID-19 virus, which has killed millions worldwide.  Considering what a farce the first so-called probe into this vital matter turned out to be, this would seem to be a heartening development.  Unfortunately, it appears as though these leaders are just doubling down on the farce.  Why?  They're insisting that the same hopelessly compromised organization that conducted the last one also be assigned the follow-up, which is a recipe for failure:

In a joint statement, the G7 nations are calling for “a timely, transparent, expert-led, and science-based WHO-convened” investigation into the origin of coronavirus “including, as recommended by the experts’ report, in China.”

This might be better than nothing at all, but barely.  The World Health Organization is in China's back pocket, with its current leader hand-picked by the CCP.  The WHO parroted false Chinese misinformation about the virus' human-to-human transmissibility during crucial early stages, then ludicrously and insultingly praised Beijing's transparency.  After all of that, plus presiding over the joke of an "investigation" earlier this year, it should be abundantly clear that the WHO cannot be entrusted with this vital task.  Josh Rogin, a Washington Post writer who's written a well-regarded book about China, has not been impressed with the Biden administration's approach to accountability:

.@jdickerson points out Beijing has already said it won’t cooperate with the WHO on investigating the Wuhan labs. Blinken says “China has to cooperate with that” but has zero answers for what the US would do to bring pressure. All talk, no action.

"All talk, no action" may sound familiar -- and it was an effective attack because it rang true with many voters.  Remember, the Biden administration quietly killed a Trump/Pompeo-era State Department investigation on this front, a development that leaked, then quickly prompted the new president to issue new edicts.  Critics alleged that this looked like damage control, which is at least a plausible assessment.  Handing the ball off to the WHO, again, is an embarrassment.  It guarantees that the truth will remain shrouded in opacity, which is exactly how the CCP wants it.  Speaking of the CCP, just as they sent faulty tests and defective PPE around the world as a means of generating "good will" early in the pandemic, their vaccine diplomacy is going about as well thus far:

chile has the fifth-highest vaccination rate in the world — and their capital just went back into lockdown due to surging cases. why? because most people there have been given one of china’s weak vaccines https://t.co/WtiEZhBU0X

Even a top Chinese public health official has admitted that the CCP-produced vaccines are comparatively weak and ineffective.  Amid China's ongoing cover-up and active genocide, I'll leave you with Beijing's latest power grab and trampling of democracy and free expression in Hong Kong:

HK censors are to ban the screening of “any film content that is objectively & reasonably capable of being perceived as endorsing, supporting, promoting, glorifying, encouraging or inciting” acts endangering national security.

It's astounding to be that the international community is about to gift the CCP the world's most prestigious stage -- hosting the Olympic games -- next year.  I'm sure the regime is looking at the G7 statement on another WHO adventure, with the Olympics apparently proceeding as planned, and laughing.  There need to be consequences.