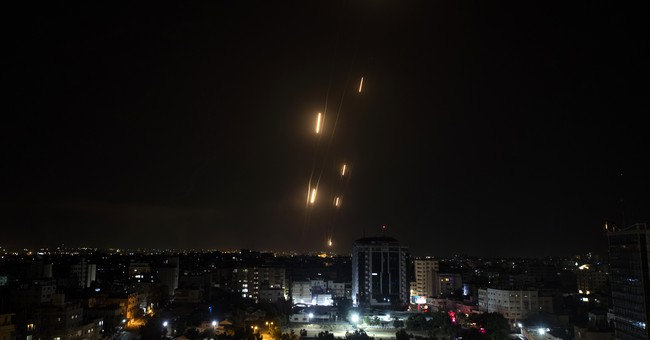 The point here is not that Israel never inflicts civilian casualties, including children, during their anti-terrorism operations and reprisals. They do, tragically, which is by design – Hamas' design. Israeli forces go above and beyond typical military protocols to reduce 'collateral damage' as much as possible. Their "roof knocks," pamphleting, and phone calls to warn of impending attacks undoubtedly save innocent lives, even as they allow hardened jihadists to escape, too. But Hamas deliberately operates from within densely-packed neighborhoods. They store rockets inside schools. They plot terror from hospitals. And they accidentally misfire rockets that take out their own infrastructure and kill their own people inside Gaza.

These factors make eliminating civilian deaths impossible, which is the terrorists' sick intention, especially when Israel is blamed for deaths inflicted by Hamas. Many in the media uncritically regurgitate the statistics they're fed, perhaps because many journalists working in Gaza are both anti-Israel and live in fear of the brutal killers who run the territory, and distort their coverage accordingly. May I remind you of this vignette published in The Atlantic by a former Associated Press reporter assigned to the conflict:

When Hamas’s leaders surveyed their assets before this summer’s round of fighting, they knew that among those assets was the international press. The AP staff in Gaza City would witness a rocket launch right beside their office, endangering reporters and other civilians nearby—and the AP wouldn’t report it, not even in AP articles about Israeli claims that Hamas was launching rockets from residential areas. (This happened.) Hamas fighters would burst into the AP’s Gaza bureau and threaten the staff—and the AP wouldn’t report it. (This also happened.) Cameramen waiting outside Shifa Hospital in Gaza City would film the arrival of civilian casualties and then, at a signal from an official, turn off their cameras when wounded and dead fighters came in, helping Hamas maintain the illusion that only civilians were dying. (This too happened; the information comes from multiple sources with firsthand knowledge of these incidents.)

Now, after news organizations such as The New York Times have printed photographs and lists of kids allegedly killed by the IDF in the most recent deadly flare-up – during which Hamas fired 4,300 rockets aimed at murdering Israeli civilians – elements of those casualty rosters are wobbling under scrutiny. Here's one correction already issued:

Three days ago the NYT printed his picture on the front page as a child victim of the war. Now it reveals this 17yo was actually a fighter for the jihadist "Mujahideen Brigades". #oops https://t.co/q0NgPUbQxt

The teenager, Khaled al-Qanou, was killed by an Israeli airstrike in the northern part of the Gaza Strip on May 13, according to a statement from the militant group, the Mujahideen Brigades. It is against international law to use minors in armed conflicts. Mr. al-Qanou was among those pictured in a New York Times feature on all the children killed in the recent conflict, but details about his death had not been confirmed then. While the Mujahideen Brigades said in a statement that Mr. al-Qanou was killed “within the Sword of Jerusalem Battle,” the name that militants in Gaza gave to the latest war, it did not explicitly state whether he was participating in the fighting when he died. In 2018, the Mujahideen Brigades were placed on a United States blacklist that punishes financing of terrorist groups.

Then there's this, shall we say, alleged irregularity:

Here is a link to the post from 2017https://t.co/HkIQ8XTTwC pic.twitter.com/4UWFl4kRoM

Obviously, many disturbing and heartbreaking images that emerge from Gaza or Palestinian territories are authentic. But there's also good reason for the press to express some skepticism of certain statistics, accounts and even photos or footage, especially given jihadist groups' penchant for generating propaganda for the purpose of manipulating world opinion. Just because something is said or 'shown' to have occurred, doesn't mean it shouldn't be looked into and confirmed. If you missed it, HBO's Bill Maher did a strong job laying out the pro-Israel case on his show Friday night, relying on facts and common sense as he jousted with a Times columnist who was laboring to apply "bothsides-ism" to current and historical dynamics:

It's no small wonder, as Allahpundit reminds us, that bumbling, lying anti-Semite Rashida Tlaib has called for Maher's show to be boycotted. I'll leave you with this (content warning):

I wish I could post the longer version, but every f*cking word of this. Please take a few minutes to listen. This is what a lot of Jews have been thinking over the last few weeks. pic.twitter.com/z4Y6fDLc5s