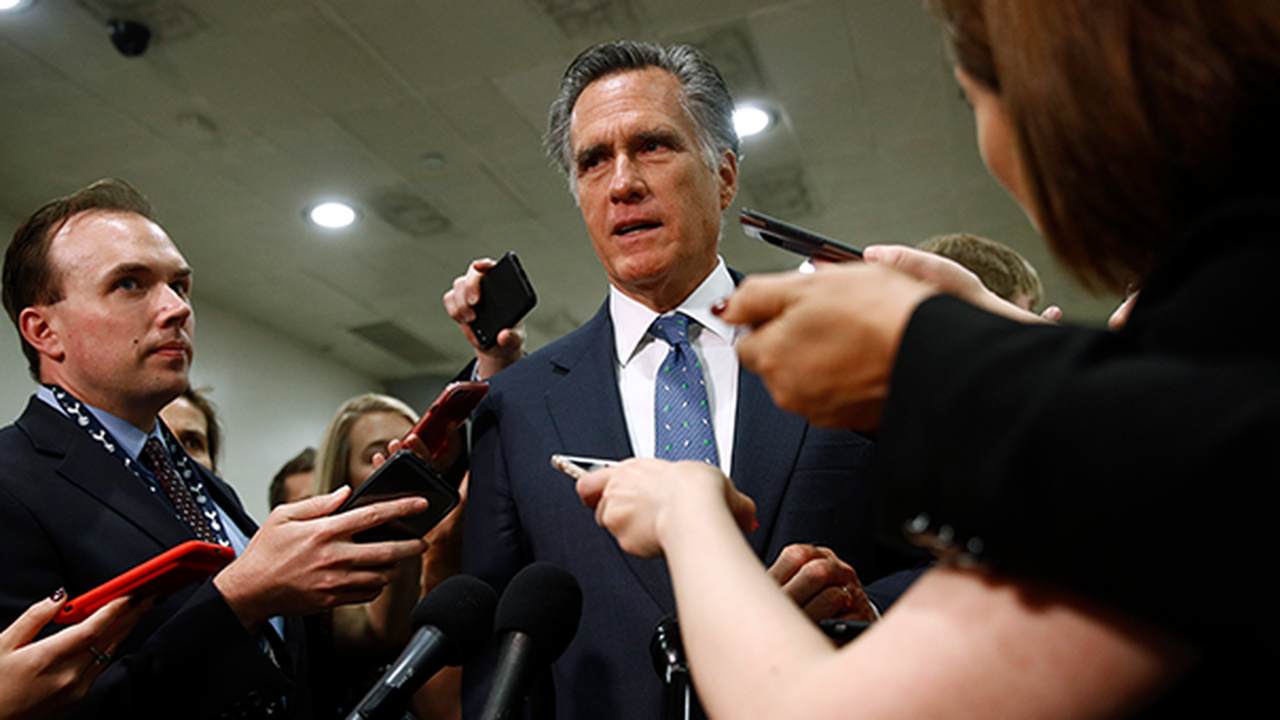 On my radio show earlier in the week, Sen. Mitt Romney of Utah indicated that he was not impressed with the Democrats' $1.9 trillion so-called COVID relief bill, calling it packed with wasteful and unnecessary spending. To make his point abundantly clear, he penned an op/ed in the Wall Street Journal labeling the proposal a "clunker" that doesn't meet the needs Democrats claim it does. "It would waste hundreds of billions of dollars, do nothing meaningful to get kids back to school, and enact policies that work against job creation," Romney writes. "The Congressional Budget Office’s recent analysis of the plan found that more than a third of the proposed funding—$700 billion—wouldn’t be spent until 2022 or later, undermining the administration’s claim that the massive price tag is justified for urgent pandemic-related needs."

This important statistic dovetails with the point I've been making about the legislation's funding for schools, which advocates insist is necessary to safely reopen classrooms. But tens of billions of taxpayers dollars allocated for that purpose currently sit unspent, and the vast majority of the new bill's money for schools would be spent from 2023 to 2028. It has nothing to do with facilitating the safe return of in-person instruction. Romney goes on:

The bill is also filled with bad policies and sloppy math. It calls for $350 billion for states and localities. If you live in New York, you might think that sounds about right because the pandemic severely exacerbated your state’s existing financial woes. But New York is the exception. Florida hasn’t even had to dip into its rainy-day fund. California has a multibillion-dollar surplus. Utah’s revenues rose by double digits. JP Morgan found that 21 states had revenue increases in 2020. Other states drew on rainy-day funds—which is what they are there for. Only a few are in severe financial distress. The same is true of cities and counties: Some are hurting, but the great majority aren’t.

...Senate Republicans will support whatever is needed to expand Covid testing, accelerate vaccine delivery and support health providers. We will likewise support robust assistance for those who have been crushed financially by the pandemic, including by losing their jobs. A group of us proposed a $618 billion compromise measure that matched President Biden’s proposed health and vaccine funding, extended enhanced federal unemployment benefits, provided economic relief for those with the greatest need, and included nutrition funding, small-business assistance, and resources to get children safely back to school. We stand ready to negotiate a plan that helps America recover, both physically and financially, from this dread disease. We are willing to compromise in an attempt to get the administration to come down from its ill-considered $1.9 trillion plan and instead provide need-based relief.

"We have shown a willingness to compromise—which the president and Democratic congressional leaders have yet to reciprocate," Romney concludes, correctly. For all Biden's talk of healing and compromise, he's not shown genuine interest in finding middle ground on this, or much of anything else yet. Democrats see this as an opportunity to spend gobs of money under the (popular) guise of "COVID relief," even if huge sums of that cash do not actually "meet the moment," to borrow a popular cliche, in any reasonable sense of what the phase actually means. President Biden posed what he called a "rhetorical question" a few days ago, asking what specific elements of his bill the critics would eliminate. It's not rhetorical at all, of course. Compromise-minded Republicans have offered a much more targeted bill that aligns with Biden's requests in core pandemic-related areas. But it's more than $1 trillion less expensive than what Biden's party have put on the table because most of the gunk has been cleared out. The GOP proposal is a serious plan, not a wildly expensive Democratic Christmas list. David Harsanyi argues that Republican opposition needs to be loud and serious:

Republicans have to stop referring to the Democrats’ newest ideological wish list as a COVID-“relief bill” or “rescue bill,” or any of the other euphemistic misnomers used by the media. Surely, there is some GOP spin doctor who can come up with a catchier, more precise name for Joe Biden’s $2 trillion partisan monstrosity?...The five previous COVID-relief bills were filled with many stables’ worth of Democratic hobbyhorses, but at least then there was a genuine case that the proposals had to pass. There is no such case now. With the pandemic likely to recede, the best stimulus will be a return to normalcy, accompanied by a handful of narrow, targeted bills designed to assist those who were the most adversely affected by the government-induced shutdowns. Before long, there will be a backlash over the government’s zealous and ineffective behavior during the pandemic, and Republicans should make sure they’re on the right side of it. Sure, Republican legislators will be accused of being massive hypocrites on the issue of spending — and in most cases, these accusations will be true. But it is never too late to do the right thing. A minority party that stands against profligate waste, expansion of federal power, and corrosive dependency only half the time is better than a minority party that never says a word.

Democrats and their media allies keep talking about how popular the Biden plan is in the polls, and how Republicans could harm themselves by opposing it. The top line public opinion data is good, but the strength of the Democrats' hand is way overblown, in my view. The public generally responds favorably to "relief packages," and the dollar amounts are almost meaningless. Would most voters support a $600 billion plan? Sure. A $4 trillion plan? Sounds great. Republicans need to make the case that this is far too much spending on totally unrelated Democratic priorities, underscored by Romney's point that more than one-third of the dollars in question wouldn't even start to be spent until next year and beyond. Framed in different ways, the polling looks better for opponents of this un-targeted avalanche – via Roll Call:

The GOP is road-testing messages in battleground districts. A poll obtained by CQ Roll Call and conducted for The American Action Network, a nonprofit group that supports Republicans...focused on whether Congress should pass legislation encouraging schools to safely reopen and the possibility that aid payments could go to undocumented immigrants...[A poll] by the right-leaning Remington Research Group in Virginia’s swingy 7th District, found pandemic-weary respondents were receptive to Republican messaging surrounding the relief package and other measures that the Biden administration and the Democratic-led Congress have made priorities in its early weeks...The AAN poll found that 65 percent of respondents preferred targeted relief measures focusing, “on only the highest priorities of COVID relief like vaccine distribution and opening schools,” versus 27 percent who said they thought Congress should, “go big and address many priority items for the Biden Administration, like bailing out state governments and extending benefits to illegal immigrants.” The poll surveyed 804 likely 2022 voters and had a margin of error of +/- 3.3 percent.

I'll leave you with Senate Minority Leader Mitch McConnell deftly summarizing some of the strongest points against the Biden bill:

Even mainstream liberal economists agree that our country does not need another massive firehose of borrowed money. This isn’t April 2020. This is a different chapter. Washington should focus on practical policies to finish this fight. Accelerate vaccinations. Get kids back in school. Help the families and small businesses that actually need help. And get laid-off Americans matched with job openings ASAP.  Unfortunately, the Democrats’ partisan proposal would not just be wasteful, but in certain areas, actively counterproductive. It would have Washington go out of our way to discourage hiring, discourage a return to work, and actually keep things shut down longer.

A former Democratic cabinet secretary and prominent liberal economist is expressing concerns that the $1.9 trillion price tag is too high, and even left-leaning Politifact is swatting down Biden's claim that there's a "consensus" among economists that there's no such thing as going "too big" in this context.