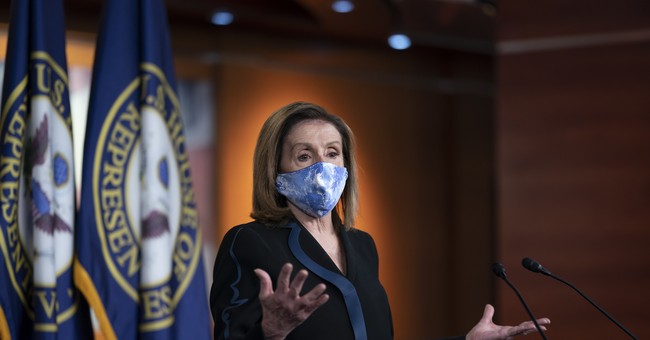 UPDATE - After all of this, the outrage and pressure has grown to such a degree that the Democrats appear to be abandoning their attempted election theft scheme in Iowa.  Breaking earlier today, Speaker Pelosi now says she will seat the rightful winner in the IA-02 race, Congresswoman-elect Mariannette Miller-Meeks (R) when the new Congress is sworn in early next month. Unless something changes, Hawkeye State voters seem to have prevailed at last:

Original Post: We've been all over this story as it's slowly developed, so here's the very latest: The rumors are true.  Democrat Rita Hart, who lost her Congressional election in Iowa's Second District, is filing paperwork to have fellow partisans in the House of Representatives "review" and overturn her defeat.  Hart lost to Republican Mariannette Miller-Meeks in the initial vote tally, then lost the recount.  Miller-Meeks' victory was formally certified by the state, and the Hart campaign chose not to challenge the outcome through Iowa's court system.  Instead, the defeated candidate was said to be strongly considering appealing to the Democrat-controlled House of Representatives in order to uproot the voters' decision and achieve "the result we need."  And that's exactly what she's doing:

Democrat Rita Hart is asking the U.S. House to investigate and overturn the race that Iowa says she lost by six votes, arguing that 22 ballots were wrongly excluded and others weren’t examined during the recount. In a notice of contest released Tuesday, Hart argues that she would have netted 15 votes and defeated Republican Mariannette Miller-Meeks had the 22 ballots been tallied in Iowa’s 2nd Congressional District...Iowa’s canvassing board certified Miller-Meeks as the winner by a vote margin of 196,964 to 196,958, the closest congressional race since 1984. Her victory would narrow the Democratic House majority, which is currently 222-211 with two races uncalled...The certification followed a recount in which Hart nearly erased the 47-vote lead that Miller-Meeks held after the initial canvass. The lead had earlier flipped back and forth between the candidates after the discovery and correction of two major tabulation errors. Hart announced earlier this month that she would not challenge the outcome in Iowa’s courts, saying state law would have required a contest to be decided within days and did not allow for adequate time to examine thousands of ballots... Republicans have reacted with outrage to Hart’s maneuver, saying she is bypassing a review by Iowa judges while attempting to have her fellow Democrats declare her the winner.

Based on the rules and the law, Hart lost. She wants to sidestep the proper process, convince Democrats in Congress to count certain votes that she feels were wrongly excluded, and have herself declared the "real" winner -- overruling voters and Iowa's system. It's a brazen effort to steal an election. If she and her lawyers believed they have a strong case, they could have presented it to impartial arbiters through the state's judicial system. They deliberately chose to eschew that option, however, relying on the bogus excuse that there wasn't enough time. The Trump campaign has been filing motions and fighting in court for weeks on end, and another contested House race is caught up in a legal battle that will stretch into 2021.  In other words, Team Hart's explanation is nonsense.  Their true motive is plain: They want power, and going through proper channels was seen as less likely to succeed than asking biased partisans to go along with their justifications to uproot a settled election outcome that they don't like.  That's it.  As we noted last week, this scheme is very unpopular among district voters:

We also pointed out that a slew of local newspapers -- including a number whose editors endorsed Hart -- have criticized her flirtations with this attempted power-grab.  Here's another one joining the chorus over the weekend:

Hart has chosen to take the outcome of this election out of the hands of Iowans and file a petition directly with the U.S. House of Representatives — which just happens to be under Democratic control. Hart sidestepped Iowa’s process for appeal, which would have sent the question to Iowa’s fair and impartial court system. That was an inappropriate move...Rita Hart should step back, regroup and run again if she wants a shot at representing Iowa. Coming into Congress through a backdoor held open by Pelosi will never bode well with Iowans.

The editorial spends a lot of time chastising Republicans, which is what many newspaper editorialists live for, but it's now apparent that nearly every significant paper in the state has felt compelled to condemn and reject Hart's in-motion steal.  Here is an interesting angle from National Review's Jim Geraghty: "It will be interesting to see where Iowa’s lone remaining Democrat in Congress, Cindy Axne, comes down. Axne has avoided commenting on the election dispute; Hart is asking Axne to override the same certified election results that include Axne’s own reelection to Congress."  Axne has stubbornly refused to comment on this matter (update: like a good partisan, she's now endorsing this scheme).  I'll leave you with this:

This election has been decided by Iowans.

That decision should not be thrown into Washington’s hyper-partisan atmosphere.

It is shameful that Rita Hart does not have faith in Iowans, and does not respect the decision of Iowa voters. #ia02 pic.twitter.com/neq3kEA058