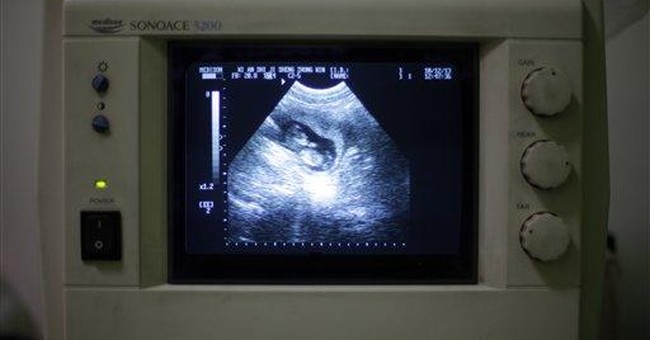 On one hand, this article is as grotesque as you might expect from an aggressive abortion apologia.  On the other hand, it's also something of a satisfying read for pro-lifers because at it's core, it's an extended rant about how reality is on the side of life -- which is a PR nightmare for the abortion brigade.  This tweet garnered lots of attention, for obvious reasons (many of the replies and quote tweets are enjoyable):

Because of imagery that connects abortions with baby-killing, the life-saving procedure is still often associated with shame and tragedy. https://t.co/UtKZSn3kI3

Within this short post alone, a few things jump out: First there's the Orwellian reference to abortion -- the deliberate act of ending a human life -- as a "life saving procedure."  It is true that in a small fraction of cases, abortions are carried out under medical advice specifically in order to save the life of the mother.  Virtually nobody, even a large majority of pro-lifers, believe such procedures should be illegal.  But the 'life of the mother' argument (along with other potential exceptional circumstances like rape and incest) does not apply to the overwhelming majority of abortions, which are purely elective.  They are performed, ultimately, for reasons of convenience.  This is not to say that many or most of the decisions are frivolous or non-compelling.  But they're not about 'life-saving.'  Indeed, a disturbing portion (roughly half) of abortions in the US represent repeat abortions, in which the woman is having at least her second abortion.  That's not  Public support for allowing abortions under rare, tragic circumstances is high.  Support drops precipitously when the question is abortion-on-demand, for convenience, using the practice as a form of birth control.  That's not about "life saving."  It's the opposite. Second, the tweet laments how "imagery" connects abortion with "baby-killing," meaning that such procedures are widely accepted as a normalized or positive phenomenon.  The piece itself, which I won't link, expands on this point:

The fact that women can die from unsafe abortions clearly hasn’t been enough to stamp out the anti-abortionist movement. Today, feminist movements across the world are going up against imagery that associates abortions with baby-killing. And for pregnant women, the procedure is still often associated with shame and tragedy...For most of human history, foetuses weren’t actually visible. We didn’t know much about how they evolved in the womb...Before ultrasound technology, anti-abortion activists often relied on religious or moral arguments against safe access to abortions. But the powerful imagery of prenatal scans helped them strengthen their cause –triggering people’s protective instincts towards what looked like a tiny unborn child.

The author decries as problematic the notion that technology -- science -- helps bolster the pro-life cause.  People can see children developing in the womb.  Those images are powerful for a reason.  They're not propaganda; they're reality.  They 'trigger' people's 'protective instincts' for living beings that 'look like a tiny unborn child' because those living beings literally are tiny unborn children.  For abortion proponents, this is a problem because potent images that people can see with their own eyes can pierce through the haze of rhetorical obfuscation and euphemism on which the abortion lobby so often relies.  For this reason, I would not be surprised if pro-abortion forces (not moderately pro-choice people, but the zealots) turn to censorship as an attempted means of suppressing images of unborn babies, pressuring media organizations and tech platforms to label "unhelpful" images as "misinformation."  Finally, because Vice is constantly jockeying for first place in the Woke Olympics, I'll leave you with this very amusing comedy sketch (content warning for language):