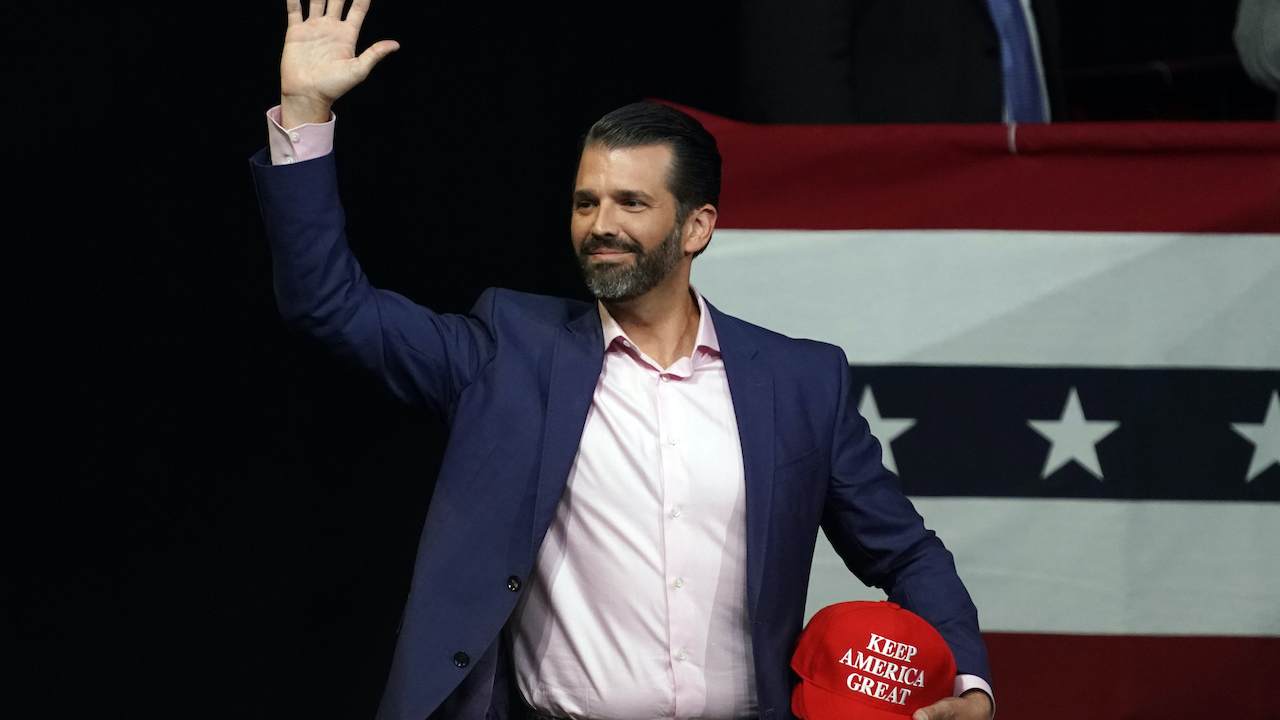 Early voting in the pair of crucial contests starts in less than two weeks. Despite some of the president's wild tweeting about postponements, Trump will visit the key state on Saturday to stump on behalf of the GOP senators, whose victories would prevent a full Democratic takeover of the federal government next year. The vice president is returning to the Peach State on Friday. And via Axios, here's the just-released spot (click through):

NEW: In a six-figure radio ad being released in Georgia today, Donald Trump Jr. tells the state's voters that the U.S. Senate — and his father's accomplishments — are on the line during January's special election, according to audio obtained by @axios https://t.co/ESanIH92wA

Audio is here. The commercial begins with the famous clip of Sen. Chuck Schumer promising to "take Georgia," then "change the world." Trump Jr's voiceover:

"The radical Left wants to tear down everything we've accomplished.  Defunding the police, destroying private health insurance, and dismantling the Supreme Court. They'll take away our Second Amendment rights, and make it harder for law-abiding citizens to defend themselves in their own homes.  On January 5th, the US Senate is on the line.  And my father's accomplishments are on your ballot...Don't let Chuck Schumer and the radical Left succeed.  On January 5th, vote Kelly Loeffler and David Perdue for Senate."

A voter registration group that was led by Georgia Democratic Senate candidate Raphael Warnock until earlier this year is under investigation for allegedly sending ballot applications to non-residents, the Georgia secretary of state announced on Monday. The New Georgia Project, where Warnock served as CEO until February, is one of four voter sign-up groups being probed for improper registration activities, Georgia secretary of state Brad Raffensperger said in a press conference. The announcement comes as Democrats have praised Raffensperger, a Republican, for pushing back against President Donald Trump's allegations of election fraud in Georgia during the presidential election. Meanwhile, Warnock, who is engaged in a heated race that could determine party control of the Senate, dismissed past investigations of voter fraud against the group as "alarmist."

While Raffensperger said he has not seen indications of systemic fraud, he said there is evidence of "third-party groups working to register people in other states to vote here in Georgia." Raffensperger said the New Georgia Project "sent voter registration applications to New York City," in a potential violation of state law. "Voting in Georgia when you are not a resident of Georgia is a felony," said Raffensperger. "These third-party groups have a responsibility to not encourage illegal voting. If they do so, they will be held responsible."

Ironically, as some Georgia Trump supporters have attacked Raffensperger for following the law and certifying a legitimate Biden victory in the state, Democrats have praised his integrity and independence. It'll be harder for them to shrug off these serious allegations as politically-motivated nonsense from a partisan official. I'll leave you with Perdue's new ad, highlighting his opponent's embrace of Bernie Sanders, which we wrote about earlier in the week: