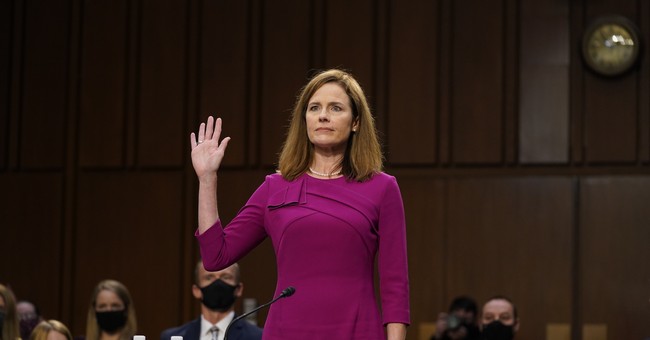 Leftists have struggled to lay a glove on Judge Amy Coney Barrett throughout her marathon Supreme Court confirmation hearings, so they've been reduced to pouncing on micro 'issues' in their desperate efforts to demonize her.  Perhaps the dumbest example was their phony umbrage over Barrett using the term "sexual preference," as opposed to "sexual orientation," while discussing LGBTQ rights.  Sen. Mazie Hirono -- a slow-witted bigot -- made a show of objecting to that phrase, circulating her 'viral' moment on social media:

Let me make clear - sexual preference is an offensive and outdated term.

To suggest sexual orientation is a choice? It's not. It's a key part of a person's identity.

The LGBTQ+ community should be concerned with #WhatsAtStake with Judge Barrett on the Supreme Court. pic.twitter.com/4TWyATMX0Y

Sen. Cory Booker also seized on this alleged controversy during the hearing.  Online, leftists dutifully churned out content expressing grave concern and outrage.  Slate declared ACB's use of the term "alarming" and an "anti-gay dog whistle."  The Advocate chimed in, calling the moment "revealing."  News organizations wrote stories about LGBTQ advocates being "upset" over the formulation, and other activist groups piled on:

Here's a senior primetime producer weighing in, urging the media to intervene and add "important context" to Barrett's horrible affront:

"Sexual preference," a term used by Justice Barrett, is offensive and outdated. The term implies sexuality is a choice. It is not. News organizations should not repeat Justice Barrett's words without providing that important context.

A few thoughts, before we get to the hypocrisy and selective outrage: First, Judge Barrett employed the term "sexual preference" in the context of stating that she does not, and would not, discriminate on that basis.  Second, when it was brought to her attention that she'd used a supposedly outdated and offensive phrase, she apologized and clarified:

This was contrived nothingness from the start.  The real issue here is the activist Left's capricious abuse and weaponization of language to punish political or ideological opponents.  If Barrett's apology above was necessary, there's a list of others whose legacies are now sullied, or who ought to be lining up to beg forgiveness.  For instance, liberal icon Ruth Bader Ginsburg used "sexual preference" in 2017, saying, "our society has come to respect people, whatever their sexual preference."  Problematic, Sen. Hirono?  What about the current Democratic presidential nominee?

If it's always and automatically wrong to use the term sexual preference, should former Vice President Joe Biden apologize for his outdated and offensive terminology? During a roundtable discussion in May, the Democratic Party's presidential candidate promised to "rebuild the backbone of this country, the middle class, but this time bring everybody along regardless of color, sexual preference, their backgrounds." Was Biden implying that he thinks being gay is a choice, or was he just using a term that is obviously, in many contexts, a synonym for sexual orientation, just as Barrett was?

That was this spring.  Multiple Democratic members of the Senate Judiciary Committee have used the term, as well.  But RBG was old, and Biden is old.  Maybe they get a pass.  Barrett is in her 40's. She should know better, no?  Well, here's the aforementioned LGBTQ publication, The Advocate, favorably quoting someone employing this very same "offensive" and "outdated" phrase...a few weeks ago, days before it became "revealing" and bad:

Pink News has done the exact same thing.  Other instances of prominent Democrats and news organizations employing "sexual preference" and "sexual orientation" interchangeably are ubiquitous.  It has happened, and continues to happen, frequently.  I am open to the idea that "orientation" or other descriptors are more accurate than "preference," which at least implies a choice -- as opposed to an immutable characteristic.  But I reject the alienating cynicism of endlessly changing the acceptable lexicon, and applying different rules to different people, depending on whether or not they're perceived "allies."  And things start to get downright Orwellian when language is outright changed (literally overnight) to align with prevailing partisan winds.  This is wild and frightening, via Megyn Kelly's new producer:

This "wasn’t even done to account for evolving tastes. It’s an effort to retroactively justify a contrived attack on the character of one particular Supreme Court nominee," writes Noah Rothman. "Culture that fluid isn’t culture at all."  Perhaps we shouldn't read too deeply into a hastily-added "offensive" flag in one online dictionary.  And we can have reasonable discussions about the evolution of language and terminology, as well as the impact of jurisprudence on minority groups' rights.  But this little tempest has illustrated how woke political correctness can be enforced not to encourage tolerance or advance equality, but as a selectively-deployed cudgel.  It's not about progress or justice.  It's about politics and punishment.  Hard pass.  I'll leave you with this:

Coney Barrett growing more popular as the public gets to know her. https://t.co/OlUfjgj1Rt