Hmm: Would a Senate Democratic Majority Nuke the Legislative Filibuster? 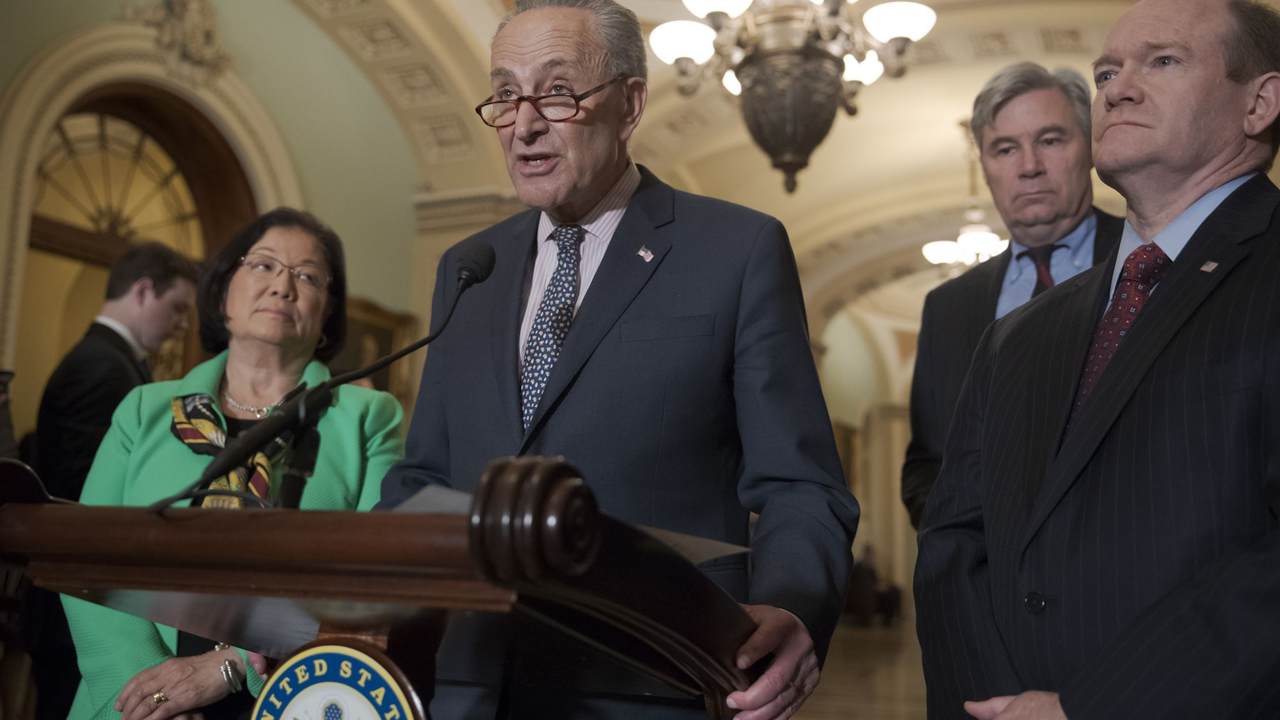 At this moment in time, Joe Biden is favored to win the presidency, Democrats are perhaps slightly favored to win control of the Senate, and the House appears unlikely to change hands. So barring meaningful shifts in the current political winds -- which are of course eminently plausible -- there's at least a decent chance that a left-lurching Democratic Party will wield unified control over the federal government starting next January. If that comes to pass, what would their governing agenda be, and what might stop them from implementing it? Even if they take back Congress' upper chamber, Chuck Schumer won't have a filibuster-proof majority to play with, unlike a period of time early in the Obama years. So Republicans could likely block most major legislative overreach with filibusters unless Democrats decide to once again escalate their power grabs with the ultimate "nuclear" detonation.

During the previous administration, then-Democratic leader Harry Reid ignored Mitch McConnell's prescient warning and nuked the filibuster for executive and judicial nominations, blowing up an obstruction tool that Democrats had pioneered against President Bush. Republicans have since exploited the Reid Rule to great effect, confirming a cavalcade of federal judges during President Trump's first term. But the legislative filibuster has remained intact. Most Republicans have defended that tool of the minority, even when it's thwarted their agenda, as have quite a few Democrats, especially from the older guard. But it's becoming an emerging litmus test of progressive bona fides to favor ending the ability of 41 Senators to block major legislation from passing. Here's Delaware's Chris Coons, a liberal who isn't generally considered a firebrand zealot (in spite of this) openly flirting with the idea:

Unlike some of his colleagues on the left, Coons doesn’t advocate getting rid of the legislative filibuster. He once even led a letter against scrapping it. But he’s also not ruling it out...“I will not stand idly by for four years and watch the Biden administration's initiatives blocked at every turn,” Coons said. “I am gonna try really hard to find a path forward that doesn't require removing what's left of the structural guardrails, but if there's a Biden administration, it will be inheriting a mess, at home and abroad. It requires urgent and effective action.” ...It’s an acknowledgment of how partisan the Senate has become and signals that aggressive moves may be in store for Capitol Hill if Democrats take back the Senate and the White House and face blanket GOP resistance led by new Minority Leader Mitch McConnell.

The filibuster rule in the Senate is one of the only remaining traditions that forces us to compromise. We need more of that, not less.

Last year, @SenatorCollins and I made that clear in a letter to Leaders McConnell and Schumer – and 59 Senators from both parties joined us. pic.twitter.com/N3GmLU6fV6

Coons has gone from spearheading a letter against doing away with the legislative filibuster (Coons was first elected to the Senate in 2010, so this isn't ancient history) to conspicuously saber-rattling about it. That's notable, and some GOP strategists are paying attention:

Still more of a question for the Sinemas and Manchins of the world, but a Chris Coons laying the rhetorical groundwork to nuke the legislative filibuster is pretty ??. https://t.co/9DgHjiVWDQ

Notice how Coons is already casting would-be Republican opposition as recalcitrant, and framing the challenges a President Biden would face as in "urgent" need of "effective action." These preemptive complaints are hardly unique and could be employed by any administration of either party. We already knew the Senate's left flank is champing at the bit to launch another nuclear strike. As Liam Donovan says in his tweet, reporters should be pressing the relatively moderate Senate contingent, including red state challengers, for their firm stances on this question. It may seem like an "in the weeds" Beltway subject, but it has major implications.  Senate races are frequently high-stakes. With the judiciary on the line, and a longstanding backstop against one-party rule potentially on the chopping block, the stakes are arguably higher than ever. I'll leave you with Cocaine Mitch continuing to make the most of Democrats' last escalation on this front:

Invoked, 51-43: Motion to invoke cloture on Executive Calendar #717 Cory T. Wilson to be U.S. Circuit Judge for the Fifth Circuit.

They've been badly burned by their last power grab, but not badly enough to categorically rule out trying another one, apparently.  And by the way, please recall that Senate Democrats used the filibuster to block debate on a police reform bill just yesterday.