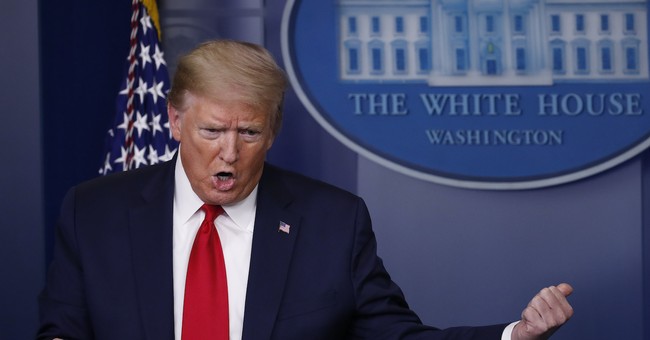 In early April, the Wall Street Journal's editors appealed to President Trump to change the format and style of his daily Coronavirus task force press briefings. They argued that the sessions dragged on for too long, and too often descended into counterproductive battles with reporters. As someone who watches these briefings nearly every day, I agreed with the overall message of the editorial and wrote as much at the time. Here's a snippet of the original piece, published April 8:

Sometime in the last three weeks Mr. Trump seems to have concluded that the briefings could be a showcase for him. Perhaps they substitute in his mind for the campaign rallies he can no longer hold because of the risks...They last for 90 minutes or more, and Mr. Trump dominates the stage. His first-rate health experts have become supporting actors, and sometimes barely that, ushered on stage to answer a technical question or two. Vice President Mike Pence, who leads the task force, doesn’t get on stage until the last 15 minutes or so. That becomes the most informative part of the session, since Mr. Pence understandably knows details the President doesn’t. Mr. Trump opens each briefing by running through a blizzard of facts and numbers showing what the government is doing—this many tests, that many masks, so many ventilators going from here to there, and what a great job he’s doing. Then Mr. Trump opens the door for questions, and the session deteriorates into a dispiriting brawl between the President and his antagonists in the White House press corps...If Mr. Trump wants to make his briefings more helpful to the country, here’s our advice. Make them no more than 45 minutes, except on rare occasions. Let Mr. Pence lead them each day, focusing on one issue or problem. Mr. Pence can take the questions, and Mr. Trump can show up twice a week to reinforce the message.

This was sound advice. Those in the media who were advocating for the press to refuse to air the briefings live, or even to boycott them altogether, were allowing their intense anti-Trump animus cloud any semblance of news judgment. But the clear newsworthiness of the pressers does not mean that they have been handled or deployed well -- from either a public information perspective or a political one. But the president didn't want to hear it, attacking the Journal editors as "fake news," and touting the high ratings he was pulling in, which was unseemly, given the circumstances:

The Wall Street Journal always “forgets” to mention that the ratings for the White House Press Briefings are “through the roof” (Monday Night Football, Bachelor Finale, according to @nytimes) & is only way for me to escape the Fake News & get my views across. WSJ is Fake News!

And so the dysfunctional ritual marched forward day after day, with some sessions seeming professional and useful, while others bogged down with petty, messy recriminations from performers on both sides of the antagonistic divide. At long last, the president and his team have reportedly come around to the WSJ editors' perspective, belatedly learning the lessons that seemed rather apparent weeks ago:

President Trump plans to pare back his coronavirus press conferences, according to four sources familiar with the internal deliberations. He may stop appearing daily and make shorter appearances when he does, the sources said — a practice that may have started with Friday's unusually short briefing. Why this matters: Trump's daily press conferences — televised to a largely homebound population — have dominated the public discourse about the coronavirus. Behind the scenes: A number of Trump's most trusted advisers — both inside and outside the White House — have urged him to stop doing marathon televised briefings. They've told him he's overexposed and these appearances are part of the reason polls aren't looking good for him right now against Joe Biden. "I told him it's not helping him," said one adviser to the president. "Seniors are scared. And the spectacle of him fighting with the press isn't what people want to see."

Trump has in fact seen his polling fortunes sag in recent days, with seniors gravitating away from him. Republicans have been worried that the daily show was undercutting public confidence in the administration's handling of the pandemic, with some polling data starting to get pretty scary for the incumbent's party. The point of these briefings should be to inform and reassure the public, not engage in marathon mutual grievance sessions. The previous approach got old pretty fast; we'll see if the new approach fares better and if it lasts. I'll leave you with my recent conversation with a Republican chief executive who's adopted an approach of aggressive transparency in his state, which has been paying dividends:

Governor Chris Sununu (R-NH) Discusses How The Granite State Is Handling The Coronavirus & The Steps He Is Taking To Reopen The State https://t.co/Wr2yYIhAvS pic.twitter.com/gByc0GtxCw