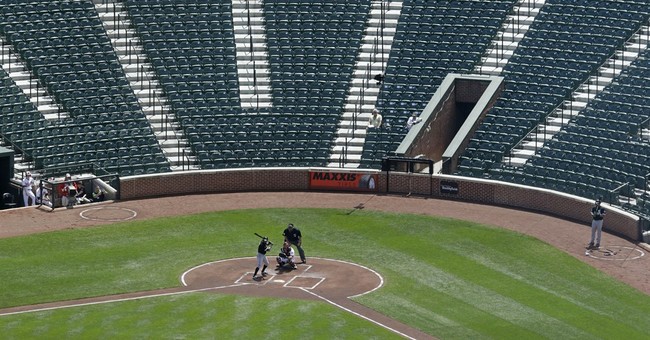 I say "bonkers" because as I read through ESPN's scoop late last night, I kept shaking my head in disbelief over how crazy it sounds -- and how completely ludicrous it would've sounded to virtually anyone on the planet even just a few weeks ago.  But with live sports ground to a halt, demoralizing millions of fans in desperate need of distraction, outside-the-box thinking is in order.  And this would certainly qualify, via Jeff Passan:

NEWS: Major League Baseball and the MLBPA are focusing on a plan backed by federal health officials that could have players in training camps by May and games soon thereafter.

Details at ESPN on how MLB may return -- and the difficulty in doing so: https://t.co/zDoNa3k4pm

The gist of the plan is to have basically the entirety of Major League Baseball relocate for months to a compound of hotels in Arizona, where the Diamondbacks' stadium and ten 'cactus league' spring training ballparks (and perhaps "other nearby fields") would host a heavy stream of games with no fans in attendance.  The truncated season would start in May or June.  And apparently at least some health officials have given preliminary green lights to the scheme:

Players, coaching staffs and other essential personnel would be sequestered at local hotels, where they would live in relative isolation and travel only to and from the stadium, sources said. Federal officials at the Centers for Disease Control and Prevention as well as the National Institutes of Health have been supportive of a plan that would adhere to strict isolation, promote social distancing and allow MLB to become the first professional sport to return...The logistics to pull off such a plan would be enormous and cumbersome on the league side and require the buy-in of players, who sources expect to be skeptical of separating from their families for an indefinite amount of time -- perhaps as long as 4½ months, if the inability to stem the coronavirus outbreak keeps teams from playing in their home stadiums in 2020. Still, there is hope among leadership on both sides that the combination of receiving paychecks for playing and baseball's return offering a respite to a nation beset by the devastation of COVID-19 would convince players to agree to the plan, sources said.

The details and various potential ideas under active discussion get weirder from there:

- No mound visits from the catcher or pitching coach

- Seven-inning doubleheaders, which with an earlier-than-expected start date could allow baseball to come closer to a full 162-game season

- Regular use of on-field microphones by players, as an added bonus for TV viewers

The league is apparently sensitive to the blowback experienced by the NBA when groups of its players got access to Coronavirus tests, back when they were exceptionally hard to come by (the NHL appeared to handle matters better).  Easy, universal testing would be a prerequisite to the plan working:

Most important would be a significant increase in available coronavirus tests with a quick turnaround time, which sources familiar with the plan believe will happen by early May and allow MLB's testing not to diminish access for the general public. https://t.co/02leeDo2YC

If there's any significant portion of the American public still unable to access COVID-19 tests, it would be a bad look for millionaire athletes to receive routine screenings in order to play phantom games for the TV cameras.  But nationwide testing has been ramping up for weeks (though stubborn issues persist), with private sector breakthroughs conceivably making all of this a bit more plausible.  As much as I'd love for this to work, logistical questions keep cropping up in my mind.  For instance, how would an outbreak in a clubhouse or at a team hotel be handled, and couldn't such an event potentially derail the entire league?  They'd all be living and working in close quarters for months on end.  Think about the exposure maps.  Expanded rosters (part of the proposal) wouldn't necessarily help if quarantine procedures need to be implemented, right?

Beyond that, the notion that you'd get a bunch of young athletes and support staff to adhere to distancing guidelines even quasi-perfectly seems...aspirational, at best.  And what would be the impact on franchises for the massive revenue hit of zero ticket revenue?  Major League Baseball generated nearly $11 billion in revenue in 2019, a new record -- and the majority of that came through ticket sales.  One mitigating factor, according to the ESPN report, is a richer national television contract from networks desperate for live sports programming: "The league could reap additional money by adding games to its national television portfolio, with networks likely to leap at live programming as other sports remain shuttered due to the coronavirus, sources said."  And the obvious math is that some revenue is better than none.  Here's what President Trump said about the return of sports just yesterday:

Pres. Trump on pro sports: “I hope football is able to start, I hope baseball can get to play a little bit, I hope basketball can maybe do their playoffs…a lot of people are tired of looking at games that are five years old.” https://t.co/DEQrK6y9s3 pic.twitter.com/NKSENlYbiT

I wonder if Doctors Fauci and Birx are prepared for questions on this subject later today. I'll leave you with Major League Baseball's statement, out today, which douses the ESPN report with some cold water -- without ruling out the reported plan:

"MLB has been actively considering numerous contingency plans that would allow play to commence once the public health situation has improved to the point that it is safe to do so. While we have discussed the idea of staging games at one location as one potential option, we have not settled on that option or developed a detailed plan. While we continue to interact regularly with governmental and public health officials, we have not sought or received approval of any plan from federal, state and local officials, or the Players Association. The health and safety of our employees, players, fans and the public at large are paramount, and we are not ready at this time to endorse any particular format for staging games in light of the rapidly changing public health situation caused by the coronavirus."

Sports fans: So you're telling me there's a chance.