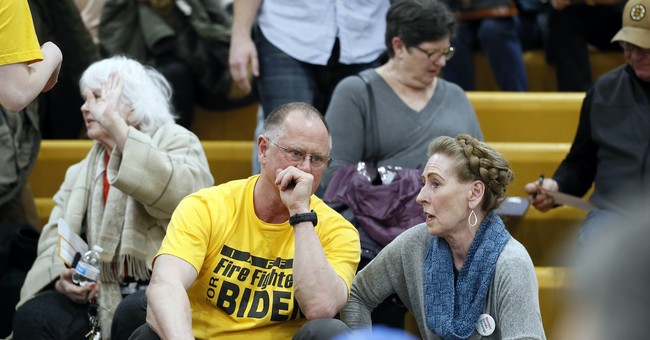 DES MOINES, IOWA -- Voters went to sleep last night with no results posted from the Iowa Caucuses, then woke up to more of the same: Nothing.  After several terse phone calls with the campaigns and the media in the wee hours of the morning, the Iowa Democratic Party confirmed that caucus tabulations would not be reported until sometime today.  Everyone is still waiting; the 'official' numbers are reportedly still hours away.

This cloak of uncertainty prodded several campaigns to begin a leak war, making public some of their internal data.  Bernie Sanders' people released partial results to effectively claim victory.  This irresponsible decision came on the heels of Pete Buttigieg's reckless decision to actually declare victory, with his camp putting out some internals that they say vindicate the claim.  Meanwhile, Elizabeth Warren's team says that she landed among a tightly-bunched top three, with Joe Biden coming in a 'distant' fourth place, based on their own estimates (while also attacking rivals for releasing incomplete information):

And the Klobuchar campaign (which smartly sent their candidate out to speak first, filling a void of data-free airtime) insists that they're neck-and-neck with the former Vice President for that fourth slot, suggesting that Biden could conceivably finish fifth:

Big night in Iowa. With the numbers we’ve seen internally and publicly, we’re running even or ahead of Vice President Biden. Wheels up to New Hampshire!

For their part, Bidenworld is putting on a brave face and pretending to be "thrilled" with what will likely be laid bare as a terrible night for them, once we have actual data.  We'll know the truth soon enough, but as we wait, here are a few thoughts on this shambolic episode:

(1) Whoever won Iowa got screwed.  The impact of the victory splash was significantly blunted by all this uncertainty and acrimony.  If Buttigieg did really win, he'll reap some benefits, but likely nothing like he'd have experienced if he'd been crowned the victor in a normal and functional manner.  Buttigieg's bounce may be muted, and rather than basking in the glow of a big upset, he'll see the outcome questioned and criticized (expect this weird connection to attract some theories), as he faces questions about whether he can replicate his success outside of lily-white early states.  If Bernie won, his supporters will be absolutely livid, convinced that the party deliberately stomped all over a triumph in order to deny their guy the momentum he was due.  This will only compound their fury over an eleventh-hour rule change about debate thresholds that they also (understandably) interpret as the DNC putting its thumb on the scale for the establishment.  The past 72 hours or so have been catastrophic for the party's reputation on their progressive flank. A cloud will hang over this whole process for a long time.

(2) New Hampshire's importance is now significantly enhanced.  Gone will be the borderline-insane rules and quirks of Hawkeye Democrats' byzantine caucus system.  A straight-up, normal primary next week will feel fresh, novel and welcome.  And it is likely to go Bernie's way; his people will be more motivated than ever yo show up in force.  Especially as headlines like this will drive the Sanders crowd crazy:

The lack of clarity out of the Iowa caucuses may have thrown a lifeline to Joe Biden and delivered a blow to Bernie Sanders https://t.co/JRYvlDWxJR

(3) On the surface, Biden gets a bit of a reprieve.  His campaign is clearly making an effort to cast doubt on the validity of the Iowa results, which seem to be very bad for them.  They have something of a point. In addition to the technological tailspin that turned the caucuses into a third world farce, the party said there were "inconsistencies" in some of the results, and then there's this mess:

CNN now reporting 2nd alignment was done wrong in some precincts. If true, sounds like there may never be complete results from Iowa.

This is part of the reason why Democrats attempting the "better to get it right than to rush" spin are whistling past the graveyard; this is about much more than an (untested and vulnerable) app failing.  This meltdown will leave some scars.  But dig an inch below the surface on Biden's 'lucky break' -- the dysfunction was the story of the night, apparently allowing Biden to deflect the harsh glare of failure -- and it's inescapable that the longstanding national frontrunner is in some real trouble.  A fourth place finish, and possibly worse, exposes his weakness.  His operation had a poor ground game, and his reputation, resume and "electability" arguments did not inspire enough enthusiasm or loyalty to vault him into the top tier of finishers.

If he goes on to a weak finish in New Hampshire, and especially if he underperforms again in the Nevada caucuses, it's easy to envision Democratic voters in South Carolina and beyond seriously reconsidering whether Grandpa Joe has what it takes to win the nomination, let alone the general election.  His tepid fundraising could dry up.  An implosion scenario is totally plausible, especially with Michael Bloomberg and his bottomless vault waiting in the wings to take pole position in the center-left lane.  Biden could steady the ship in his Palmetto State firewall if robust African-American support stays strong and revives his candidacy.  But doubts are creeping in:

I don't think people are fully pricing in the meaning of an Iowa 4th place for Biden. Like, yes, he can get a lot of delegates from heavily African-American states in the South. But the 538 delegate model has Biden winning a LOT of Northern states. This calls that into question.

(4) The party and the media have been hyping massive interest and high intensity among Democrats, anticipating historic turnout.  In fact, turnout was mediocre at best, much closer to 2016 levels than the 2008 explosion -- and the percentage of first-time caucus-goers declined considerably.  This is all music to the Trump campaign's ears.  The Democrats screwed up badly, the campaigns are sniping at each other, their voters are angry and suspicious, and turnout fell short of expectations (though it was higher than expected at GOP caucuses, which went off without a hitch).  Major party figures are actively discussing throwing the caucus system overboard in the future.  I'll leave you with a few takes on how damaging Monday's debacle may be:

This is so much worse for Democrats than they yet realize. If Buttigieg is the winner, it denies him momentum and a day of front page stories about his upset victory. If Sanders is, it denies him the same & crowds the voices of his supporters & how they did it out of the news 1/

..all while promising to take their approach on to bigger things, like the US healthcare system. The botching of Iowa is already ratcheting up intra-party distrust of election systems--but also will inevitably be used as evidence against the big things Ds want govt. to do. 3/3

I think we'll eventually get accurate data and results, but this reporting failure has already exacerbated intra-party tensions, whipped up conspiracy theories, and turnout generally appears to be low. Pretty fucking disastrous.

Oh, and the perils of compromised or antiquated systems may rear their heads again -- possibly soon.