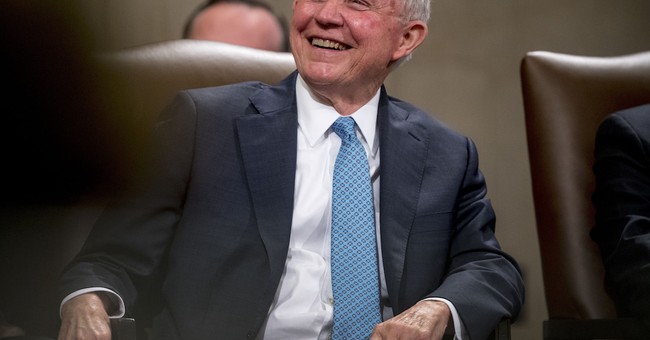 If you missed this firestorm over student journalists at Northwestern University apologizing for their journalistic acts covering Jeff Sessions' recent on-campus speech, in the face of heavy pressure from left-wing student activists, go back and read this piece. If you're pressed for time, these two clips of Fox News segments summarize the controversy rather well:

#ICYMI - New challenges to reporting the news are coming from the institutions educating the next generation of journalists. @dougmckelway’s story tonight about @MedillSchool on @SpecialReport with @guypbenson and @AdGo. https://t.co/L3enXhNMzQ

I appeared on @foxandfriends this morning — in a purple tie, for the record — to discuss the #Northwestern journalism firestorm: https://t.co/LcFd1DoPhM

At the tail end of my original post, I linked to a relatively strong and clear-headed statement released by the Dean of the journalism school, which systematically dismantled the Daily editors' groveling and upbraided the woke mob for their bullying. A taste of what he wrote:

Let me be perfectly clear, the coverage by The Daily Northwestern of the protests stemming from the recent appearance on campus by former Attorney General Jeff Sessions was in no way beyond the bounds of fair, responsible journalism...I am deeply troubled by the vicious bullying and badgering that the students responsible for that coverage have endured for the “sin” of doing journalism...I have also offered that it is naïve, not to mention wrong-headed, to declare, as many of our student activists have, that The Daily staff and other student journalists had somehow violated the personal space of the protestors by reporting on the proceedings, which were conducted in the open and were designed, ostensibly, to garner attention...I patently reject the notion that our students have no right to report on communities other than those from which they hail, and I will never affirm that students who do not come from marginalized communities cannot understand or accurately convey the struggles of those populations.

[The editors were beaten] into submission by the vitriol and relentless public shaming they have been subjected to since the Sessions stories appeared. I think it is a testament to their sensitivity and sense of community responsibility that they convinced themselves that an apology would effect a measure of community healing...I might offer, however, that their well-intentioned gesture sends a chilling message about journalism and its role in society. It suggests that we are not independent authors of the community narrative, but are prone to bowing to the loudest and most influential voices in our orbit. To be sure, journalism has often bowed to the whim and will of the rich and powerful, so some might argue that it is only fair that those who feel dispossessed and disenfranchised have their turn at calling the journalistic shots. But that is not the solution...waging war on our students on social media—threatening them both physically and emotionally—is beyond the pale.

The Dean also appeared in a CNN segment over the weekend in which he stressed the difference between journalism and activism -- conceding that many students arrive at the Medill school with the mentality of journalism as activism:

I appreciate this message, though recent events suggest that the 'disabusing' process he mentions may need to become more rigorous and urgent than it currently is. I also believe that journalism schools, in general, need to better equip and prepare their students to withstand attacks on their work, particularly from the powerful campus Left and other extreme groups. This is why:

Unlike presidential mean tweets, the more effective & insidious attacks on journalism come from the Left — because many student (and other) journalists generally agree with/are scared of/are responsive to the Left. Conservative student activists would be told to pound sand. https://t.co/bOcJK38JkX

I also appreciate the response from university president Morton Schapiro (with whom I've had my occasional disagreements) to a ludicrous open letter signed by dozens of woke young alumni in the aftermath of this controversy. Here is a portion of their melodramatic tantrum:

We are writing this open letter to express our extreme shock and dismay at the university’s violent and repressive response to last Tuesday evening’s student protest of Northwestern University College Republicans’ (NUCR) Jeff Sessions event. Namely, we are appalled at the ways in which NUPD officers brutalized multiple student protestors in defense of Sessions and the fascist ideologies for which he stands. We write as alumni, as former student activists, and as those in community with the students brave enough to directly challenge the vitriolic hatred of the right wing, even in the face of the university’s intense suppression...we know that NUPD officers forcefully grabbed and shoved students, and multiple students were pushed onto the ground...

Northwestern’s administration has historically cited freedom of expression and academic thought as rationale behind allowing dangerous entities to be present on campus, including ICE, [and] a string of right wing political pundits and figures...However, we believe it is irresponsible and dangerous for you, Mr. Schapiro and Mr. Lewis, to prioritize such freedoms over the lives and safety of marginalized students. In doing so, the university has consistently posited the humanity of marginalized students as an intellectual playground or site of political debate. In allowing these same students to be physically punished by police, Northwestern has sent a loud and clear message: speech is free, but only for the powerful.  The violently racist, xenophobic, misogynistic, and homophobic hatred that Jeff Sessions spews has real-life deadly consequences for marginalized communities.

As alumni of this university, we refuse to stand by idly in the face of such news. We are deeply troubled, disgusted, and outraged that our alma mater would brutalize student activists in the defense of fascism. We demand that you, Mr. Schapiro and Mr. Lewis, immediately issue an apology for the irreparable harm that your administration and your police officers inflicted on Tuesday evening. We demand that you, Mr. Schapiro and Mr. Lewis, openly promise that the students from Tuesday’s protest will not be further traumatized or targeted with any form of disciplinary action. Finally, we support student demands for the end of police presence on all Northwestern campuses to ensure that Black students, students of color, and other marginalized students are able to exist on campus free from surveillance, harassment, and brutality.

Cartoonishly ridiculous. Fortunately, it was tersely dismissed as such by Schapiro:

I’ve obtained a curt and appropriate email sent by President Schapiro in response to this ridiculous, overwrought tantrum: 3/3 ?????????? pic.twitter.com/Y2B8cc8YyX

Crucial to breaking the fever of mind-coddling 'social justice' insanity on campuses is adults asserting their adulthood and authority. More of this, please.