Poll: There's a New Democratic Frontrunner in New Hampshire, and She Isn't Even Running... 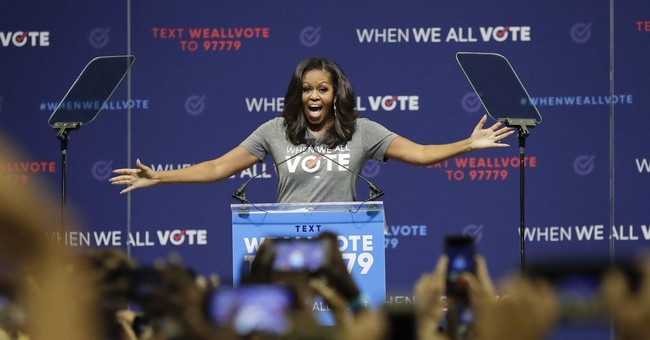 There is no indication whatsoever that former First Lady Michelle Obama has any intention of running for office, let alone for president -- now, or ever.  But if she did decide to jump into the mix ahead of the 2020 primaries, it looks like many Democratic voters would be excited about her candidacy.  According to a new poll that included Mrs. Obama as an option, she would enter the race as the frontrunner in the key early state of New Hampshire (and I'd guess elsewhere, too):

Former first lady Michelle Obama would enter the 2020 Democratic New Hampshire primary race as the frontrunner, a new Franklin Pierce University-Boston Herald poll has found — though so far she’s insisted she won’t. The poll, conducted Oct. 9-13, has Elizabeth Warren and Joe Biden tied in the lead of the current Democratic field in the Granite State primary, with Bernie Sanders slightly behind. “Today, the Democratic race is a statistical dead heat between Warren (25%), Biden (24%) and Sanders (22%),”  pollster R. Kelly Myers wrote in his summary of the poll results. “If Michelle Obama were to enter the race, it would change things dramatically,” Myers wrote. “Twenty-six percent of Democrats would vote for her, making her the new frontrunner. Under this scenario, Obama (26%) would lead Warren (20%), (Biden (20%) and Sanders (15%). She would take away 4 points from Warren, 4 points from Biden and 7 points from Sanders.”

Without Michelle, this survey shows a three-way tie; with her, she's up by a statistically-significant margin over the current top tier of the field.  She'd pull roughly equally from the trio of major contenders.  Another recent poll suggested that national Democrats are satisfied with their choices.  This survey, if replicated by other pollsters and in other places, would suggest that they're obviously not as satisfied as they could be.  I'd caution that Michelle Obama may be stronger as a theoretical candidate than as a declared one.  Her "when they go low, we go high," messaging is uplifting, but may not translate well to the relentless grind of a daily campaign, particularly among an angry Democratic electorate.

Nevertheless, a substantial number of primary voters may be anxiously eyeing Joe Biden and Elizabeth Warren and fretting about how each would perform against President Trump (whose hard re-elect number in this New Hampshire survey is a paltry 32 percent).  Meanwhile, question: Who is the actual frontrunner in the primary horse race right now?  One new poll shows Biden sliding into third place, ten full points behind Warren:

In the most recent George Washington University Politics Poll, [Warren] leads the Democratic field with 28 percent of the vote. Sanders is second at 21 percent, and Biden, the front-runner since his entrance into the race, is at 18 percent. South Bend, Ind., Mayor Pete Buttigieg and Sen. Kamala D. Harris each draw 5 percent…

But then there's this:

We'll see if and how these numbers get jumbled at all after last night's Democratic debate.  Finally, rather than gazing at the seemingly fantastical prospect of Michelle Obama jumping into the race, should we be taking another possibility more seriously?

Bloomberg has signaled he’s “still looking at” running for president, but people close him say that the only way he could even go down that path is if Biden’s fortunes suffer so much that he drops out before or during the early stages of the primary. Bloomberg could then enter the race as one of the rare moderates with enough name recognition and campaign funding to make a run. Forbes estimates his net worth at $51 billion, and he was planning to spend over $100 million on a campaign for president if he ran. “I think it’s something he wants. He has not been shy about that,” one of Bloomberg’s allies familiar with the talks told CNBC. “Nothing can happen unless Biden drops out and that’s not happening anytime soon,” this person added.

Biden tanking so badly that he drops out before, say, South Carolina seems unfathomable (he is, after all, the overall national frontrunner on paper, and gaining ground lately), but never say never. And what happens if Warren appears to be cruising toward the nomination? Would Bloomberg get the itch to run as an independent -- especially if he shares Team Trump's view that she's very vulnerable to losing a general election?

Trump's allies still fear a general election matchup against a banged-up Joe Biden more than a run against an invigorated Elizabeth Warren, people close to the president tell Axios. https://t.co/PNFHZKjm7W

This calculation is sensible, but I'll say it again: Be careful what you wish for.