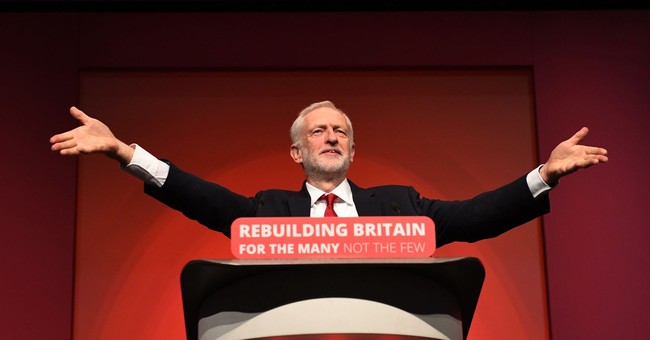 Two posts about the United Kingdom in two days -- and neither one is about the Kafkaesque Brexit mess?  Go figure.  British politics are still reverberating from the shockwaves of a bombshell article in The Sunday Times, chronicling the deep and systemic anti-Semitism within the ranks of Jeremy Corbyn's Labour Party.  We already knew that Corbyn is a truly radical figure, and that he's at least indulged anti-Jewish bigotry for years.  After all, he once called the Islamist terrorist groups Hamas and Hezbollah "friends."  What we didn't know was the extent to which he and his office have run interference for anti-Semitic party members, intervening on their behalf, while ignoring other complaints.  This is hideous (content warning):

EXCLUSIVE: leaked data base and hard drive of emails reveal Corbyn has interfered or failed to deal with hundreds of anti-semitism cases, incl. members who declared "Heil Hitler", "Fuck the Jews" and blamed Jews for 9/11 (1/) https://t.co/KHKDbGOoc9

The Labour Party has failed to take disciplinary action against hundreds of members accused of anti-semitism under Jeremy Corbyn’s leadership, according to internal documents leaked to The Sunday Times. A hard drive of emails and a confidential database last updated on March 8 reveal how the party’s system for dealing with such complaints is bedevilled by delays, inaction and interference from the leader’s office. They reveal members investigated for posting such online comments as “Heil Hitler”, “F*** the Jews” and “Jews are the problem” have not been expelled, even though the party received the complaints a year ago.

The patterns of abuse are sickening, and have been met with silence, shrugs, or an occasional "slap on the wrist."  These revelations resulted in Britain's top Jewish Labour group voting nearly unanimously in favor of a "no confidence" motion against Corbyn's leadership of the party:

The largest and oldest Jewish organisation affiliated to the Labour Party @JewishLabour proclaims that “the leadership of the Labour Party have demonstrated that they are antisemitic”. “we have no confidence in Jeremy Corbyn” and “he is unfit to be Prime Minister “. What now ? https://t.co/uz32ANPJQ9

The British Jewish Labour Movement (JLM) on Sunday passed a no-confidence motion in party leader Jeremy Corbyn, hours after a newspaper report detailed the party’s failure to confront anti-Semitism within its ranks. The Jewish group’s motion was passed almost unanimously after an “impassioned debate,” the group said in a statement...The annual general meeting of the JLM, which has 2,000 members and has been affiliated with the party for nearly 100 years, also voted that the party has a “culture of anti-Semitism” which has led to a “crisis.”...Labour lawmakers Ruth Smeeth, Louise Ellman and Margaret Hodge, who have clashed with Corbyn on the issue of anti-Semitism, all gave “strong speeches” at the meeting, the group said. The Sunday Times had earlier reported on instances in which the party has defended members who made vitriolic anti-Semitic remarks, as well as its scant expulsion of members over such cases despite more than 850 formal complaints.

A number of MP's have resigned from the party over this issue, with many expressing disgust over the fact that a Jewish member needed personal security at a recent Labour conference.  Here's a longtime Labourite, and the brother of the party's national leader from 2010 to 2015:

I expect Brexit stories to be annoying (and some inspiring). But this makes me feel truly sick. Hardly readable. Not just a moral void but a choice to protect racists. In my party. From the top. Brexit comes now but ?huge unfinished business here. https://t.co/2DZRJKAazO

This 2018 op/ed in the New York Times from a Jewish Labour partisan who didn't want to believe the worst about Corbyn is quite powerful:

In recent months, most of the Anglo-Jewish community, normally happy to keep its collective head down, has been uncharacteristically vocal on the issue of Mr. Corbyn’s anti-Semitism. I haven’t. It’s probably because I’ve lived in England all my life, but I don’t like to make a fuss. I recoil from the paranoia and neurosis that haunts many older members of my community, though I recognize its cause. I have never wanted to be a PTSD Jew, forever stuck in 1933. And I really do appreciate that parsing anti-Zionism and anti-Semitism can be a tricky business. Perhaps the deeper thing keeping me on the fence is that I desperately didn’t want to face the reality that Britain’s possible prime minister is a man who traffics in an ancient prejudice against my people. What would that say about my party — and about my country? Here’s what I do know: My fellow British Jews were right. I was wrong. From now on, Jeremy Corbyn has my loud and implacable opposition.

The Sunday Times revelations are even worse.  Nevertheless, despite Corbyn's personal unpopularity, the Tories are at best slightly ahead of Labour in nationwide polling, with several March surveys showing a statistical dead heat.  Why?  The Conservative government is divided and flailing on Brexit, with no clear end in sight.   See if you can make sense of this utterly baffling chart on upcoming Brexit-related votes in the Houses of Parliament.  I'll leave you with Prime Minister May making an appeal for cross-partisan cooperation toward a vague deal -- with the clock ticking, and public confidence in her leadership shaken: