Hmm: Is This How Trump Could Get More Wall Money -- Without Declaring an 'Emergency'? 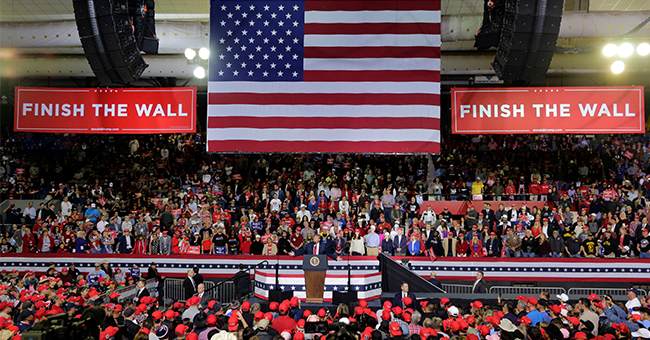 In my Tuesday post about the bipartisan, bicameral immigration and funding compromise, I recommended that Trump should accept the minuscule deal, and predicted that he would.  His subsequent tweets have indicated that he's been warming to the idea, with some media allies providing requisite cover, despite his statements of disapproval and public indecision.  Implicit in his will-I-or-won't-I positioning was the notion that the compromise legislation itself would not represent the full extent or conclusion of his efforts to fund more physical barriers along the US-Mexico border.  This has caused more speculation about the president's designs on declaring a federal emergency, or at least pursuing another form of heavy-handed executive action to redirect funds to his pet project.  But could there be a better, simpler, less legally-risky path to achieving that goal?  Washington Post columnist and former Bush speechwriter Marc Thiessen posits a plan:

To win, Trump needs to shift the debate to a place where he has real leverage: using the threat of a sequester, rather than a shutdown, to force the Democrats to give him his border barrier. In 10 months’ time, if Congress fails to act, then an automatic sequester will kick in that would reduce federal spending in 2020 to levels that Congress and President Barack Obama set in the Budget Control Act of 2011. Congress agreed to lift those spending caps for two years in 2018, increasing both defense and nondefense discretionary spending above sequester levels by $165 billion and $131 billion, respectively. But that deal runs out at the end of the year. If Congress does not lift the caps by December, then automatic $55 billion across-the-board cuts to domestic discretionary spending will take place, while defense spending will be cut by $71 billion.

That looming deadline gives Trump leverage he needs to get his wall. Democrats may not fear another shutdown, but will they really sacrifice $55 billion for domestic priorities next year just to deny Trump a measly $5.7 billion for a physical border barrier? Unlikely. If anything, Democrats want to use their new House majority to demand significant increases to domestic spending. Denying Trump his wall in December would lead to severe cuts. And Democrats would hardly have grounds on which to complain, since Trump would simply be following the terms of a budget deal that a Democratic-controlled Senate passed and Obama signed into law.

Thiessen is undoubtedly correct that this would be smarter, safer, and more effective political ground on which to fight. Democrats will be very eager to avoid an outcome that requires Congressional action to avoid. Exploiting that leverage point to obtain the rest of his $5.7 billion (or more) could be Trump's price for agreeing to help them obviate the return of automatic Obama-era spending cuts (forced by Republicans). Would they really be willing to swallow across-the-board cuts, and forego the spending increases they inevitably want, just to deny Trump more barriers? That's a call that could drive a wedge within the party, without any underlying threat of a popularly-reviled shutdown that could strengthen their PR hand.  The dispiriting news for fiscal conservatives is that when the sequester was agreed to, Republicans were at least fighting for lower spending.  This plan would involve bipartisan horse-trading for more spending on both sides.

Be that as it may, Trump could be very keen on the notion of choosing an alternative on wall funding that doesn't involve another useless and widely-disliked shutdown, and that doesn't involve him playing a constitutionally-questionable card that could gum up the entire works in court for years.  This plan C looks far more attractive than the other two -- though the temptation to take unilateral action immediately, rather than lying in wait until the December sequestration deadline, may weigh heavily on his decision. Can the base be patient?  One outcome that seems nearly impossible to envision is Shutdown 2.0, if only because Trump saw his numbers drop precipitously during the last one, only to rebound considerably once the kerfuffle finally ended:

Still only at 44 percent overall. https://t.co/tSeDetix5I

I have no doubt much of this improvement is attributable to the shutdown's end, plus a State of the Union bounce Trump likely received.  But Democrats have had a pretty rough run -- from racism scandals, to abortion radicalism, to unpopular healthcare schemes, to bonkers economic proposals -- which may be giving the big guy a boost, too.