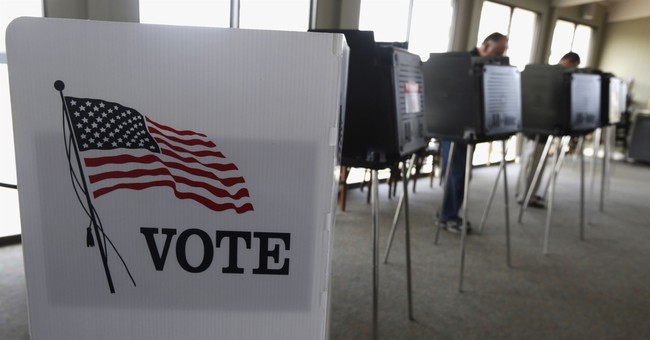 One pillar of dogma among leftist activists is that voter ID laws, under which citizens are required to present a valid form of identification in order to cast ballots in elections, amount to insidious and racist forms of "voter suppression."  That term deserves to be placed in scare quotes because it's often employed as a catch-all phrase to describe any policy or idea that liberals believe would reduce their chances of winning.  Voter ID laws have been upheld by the Supreme Court as constitutional, and enjoy overwhelming public support -- including approval from large majorities of racial minorities, who evidently don't share the professional Left's racialized hysteria.  We've written previously about how, if reducing turnout among certain populations truly were the goal of such laws, they've failed miserably.  This example out of Georgia comes to mind:

When Georgia became one of the first states in the nation to demand a photo ID at the ballot box, both sides served up dire predictions. Opponents labeled it a Jim Crow-era tactic that would suppress the minority vote...Turnout among black and Hispanic voters increased from 2006 to 2010, dramatically outpacing population growth for those groups over the same period...“I think the rhetoric on both sides has been overstated,” said Edward Foley, executive director of an election law center at The Ohio State University’s Moritz College of Law. “It hasn’t had the voter-suppressing effect that some people feared,” Foley said.

Far more useful details are available here. Speaking of Georgia and alleged voter suppression, and given the recently-raised profile of that state's failed 2018 gubernatorial nominee, please read this primer on the wild allegations that arose during that election.  Now back to the immediate issue at hand -- common sense voter integrity safeguards such as mandating identification aren't about suppression, and they don't achieve suppression.  A new academic study reviewed the data and reached important conclusions:

Strict voter ID laws do not suppress turnout, a new paper finds, regardless of sex, race, Hispanic identity, or party affiliation...In total, 10 states, ranging from Georgia to Wisconsin, require voters to show ID in order to vote. Seven of those states require a photo ID, and three do not. An additional 25 states "request" that voters display ID, but may still permit them to vote on a provision ballot if they cannot. The remaining states "use other methods to verify the identity of voters," according to the National Conference of State Legislatures. The new research, from an economics professor at the University of Bologna and another at Harvard Business School, indicates that "strict" voting laws of the type implemented in those ten states do not have a statistically significant effect on voter turnout..."Strict ID laws have no significant negative effect on registration or turnout, overall or for any subgroup defined by age, gender, race, or party affiliation," the paper's authors found. "Most importantly," they write, strict ID laws "do not decrease the participation of ethnic minorities relative to whites. The laws' overall effects remain close to zero and non-significant whether the election is a midterm or presidential election, and whether the laws are the more restrictive type that stipulate photo IDs."

Confirmed: The top talking point against Voter ID laws is bogus.  As the Free Beacon write-up also notes, however, the study found that such measures have had negligible impact on the number of recorded instances of voter fraud.  Of course, documented cases of in-person voter fraud are very rare, and it's impossible to quantify instances that may go undetected.  And a major part of the argument in favor of ID laws is that it's a straightforward deterrent.  The analysis' authors conclude: "Our results suggest that efforts both to safeguard electoral integrity and enfranchise more voters may be better served through other reforms."  I strongly agree that voter ID laws alone are hardly sufficient to prevent fraudulent and unlawful voting activity.  They're widely-favored low-hanging fruit that should be implemented universally, but they're just one piece of the bigger puzzle.

As we've been covering recently, "ballot harvesting" and chain of custody issues surrounding absentee and mail-in ballots remain very serious and pervasive concerns.  And yes, improper voter registration processes and deeply flawed voter rolls are real problems, too.  Conservatives sometimes go overboard in emphasizing the scope and nature of voter fraud, but sober efforts to combat illegal voting -- which absolutely exists -- are endlessly demagogued as racially-motivated "suppression" by people who seem to have no interest in taking any steps to prevent the practice.  Why is that?  The study quoted above is another useful retort to the demonization crowd.  It may be time for them to seek out a new scare tactic.