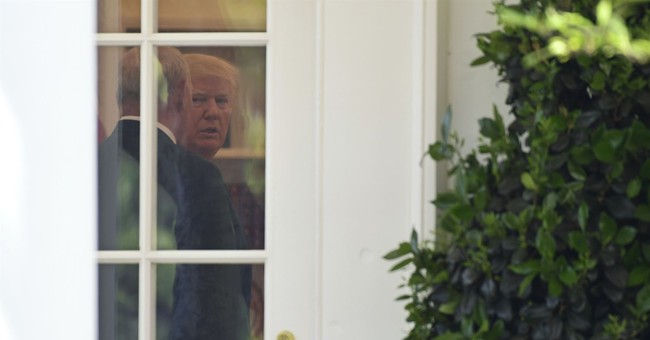 UPDATE - The accuracy of Buzzfeed's story has been denied by Robert Mueller's office, which took the extremely rare (and in this case, welcome and necessary) step of issuing a public statement this evening.  This looks like a major black eye for the website, and a boost to the president's campaign against 'fake news.'  A very big deal:

In addition to Mueller's denial, this insight from investigative Ronan Farrow strongly suggests that other plugged-in sources do not believe Trump ever issued a directive for Michael Cohen to lie under oath, which is the heart of Buzzfeed's erroneous story:

I can’t speak to Buzzfeed’s sourcing, but, for what it’s worth, I declined to run with parts of the narrative they conveyed based on a source central to the story repeatedly disputing the idea that Trump directly issued orders of that kind.

It's time for Buzzfeed to name their two anonymous sources.  This is shaping up to be a disaster for everyone involved.  The "wait for evidence" approach has once again been vindicated.

ORIGINAL POST - "Either Trump’s finished or BuzzFeed’s credibility is," Allahpundit tweeted last night, in response to a report from the online publication that immediately spread like wildfire across social media.  He's right.  The explosive story cites two unnamed law enforcement officials who claim that President Trump instructed his former attorney and fixer, Michael Cohen, to lie to Congress about the details of a real estate project in Moscow that never ended up coming to fruition.  If this is proven, it's straight-up criminal activity: Subornation of perjury, for the purpose of obstructing justice.  These are impeachable offenses.  As I said last night on Twitter and on television, if -- if -- the Buzzfeed story is true, Trump's presidency is in grave peril.

But I also urged caution.  Why? First, because we haven't seen the supposed evidence underpinning the serious allegations.  Neither, it seems, have the reporters who published the story, even as they say they're "100 percent" confident of its veracity:

BuzzfeedNews Bombshell Reporter: No We Have Not Seen the Evidence Supporting Our Report https://t.co/zzQ3zFCW38 pic.twitter.com/QH43ojbNus

It doesn't inspire any additional confidence that the other reporter involved is saying the opposite.  There are other reasons to at least question whether Buzzfeed has truly locked down the goods here:

1. It's hard to take Buzzfeed, which pushed the debunked dossier, too seriously.
2. If Cohen had such incriminating info:
a) Why no mention in his plea?
b) Don't you think he'd have a cooperation agreement?
c) Do you think he'd be spending any time in jail?
Be skeptical.

There are various responses to each of these points (I'd call the Steele dossier 'unverified,' not 'debunked,' and investigators may have gotten much of this evidence without Cohen's cooperation), but taken together, they do stir a healthy skepticism.  The second reason to take a breath and wait for verifiable facts is that a number of previous "bombshells" in this whole saga have turned out to be false, or at least less consequential or dispositive than they'd initially appeared.  Third, Mueller's office has been exceptionally disciplined on leaking. In short, Buzzfeed's story may turn out to be a real inflection point, after which the Trump presidency is crippled or extinguished.  It could also be a disaster for Buzzfeed.  At the risk of sounding like a broken record, let's wait and see what Mueller's report says.  Demands that action be taken ahead of the special counsel concluding his process, based on the assertions of anonymous sources, are premature and reckless.  Meanwhile, what to make of the president's lawyer's response?

Just in, Rudy Giuliani’s response to Buzzfeed story: “If you believe Cohen I can get you a great deal on the Brooklyn Bridge.”

That's snappy, but not convincing.  Yes, if this were all resting on the word of a proven liar (I am not inclined to believe this, for example), that would be one thing.  But here's a key portion of the Buzzfeed piece:

Two sources have told BuzzFeed News that Cohen also told the special counsel that after the election, the president personally instructed him to lie — by claiming that negotiations ended months earlier than they actually did — in order to obscure Trump’s involvement. The special counsel’s office learned about Trump’s directive for Cohen to lie to Congress through interviews with multiple witnesses from the Trump Organization and internal company emails, text messages, and a cache of other documents. Cohen then acknowledged those instructions during his interviews with that office.

It's relevant that the journalists reporting on this documentation haven't seen it themselves, but if it exists, that would be corroboration beyond one man's say-so. That's significant.  For what it's worth, Giuliani's denials have gotten more comprehensive and specific since the "Brooklyn Bridge" line.  And just to underscore just how serious this might be, if verified, watch these exchanges between Senators from both parties and the president's Attorney General nominee:

Another FLASHBACK:@LindseyGrahamSC: "If there was some reason to believe that the president tried to coach somebody not to testify or to testify falsely that could be obstruction of justice?"

At National Journal, Josh Kraushaar reasons that the "I-Word" no longer feels as far-fetched as it once did.  Perhaps so, but there are too many blind spots and "ifs" in the equation for me to go that far at this stage.  For now, I think this is the appropriate posture for Republican Senators to adopt:

GOP Sen. Lankford told me: “We are waiting to see what’s true” from the BuzzFeed report but said that if Trump directed Cohen to lie to Congress, “that’s a very big issue.”

He would not comment directly on if it’s an impeachable offense, saying he wants to see all facts first

I'll leave you with my instant analysis on Fox last night, which I think is standing up pretty well: