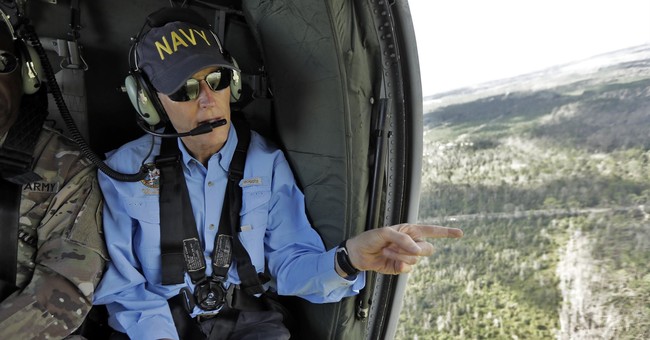 I'll confess to being skeptical at first.  When I saw initial reports on Twitter that vulnerable Democratic incumbent Sen. Bill Nelson was attacking his GOP opponent -- who happens to be Florida's sitting governor -- for prioritizing hurricane relief management over campaigning, I assumed the headlines had to be some sort of exaggeration or distortion.  Perhaps Nelson was alleging that Scott was mishandling the crisis, on substantive grounds.  Perhaps Nelson was actually alleging that Scott was spending too little time away from the trail, even as many Floridians were still recovering from a catastrophic storm.  Surely, he wasn't complaining that Scott was devoting too much of his energy to performing his job in the face of a natural disaster.  That would be a mind-bendingly stupid line of attack, right?  Uh...

...Nelson campaign advisor Dan McLaughlin accused Scott’s campaign of using the hurricane to avoid campaigning across the state. First Lady Ann Scott is now campaigning on behalf of her husband. Scott “is using the aftermath of this storm because he can’t campaign around the state without protesters; he can’t risk having to answer people’s questions directly..." McLaughlin went on to accuse Scott of “concocting this campaign scheme.”  As expected, Scott’s campaign fired back at Nelson’s allegations. “If Senator Nelson wants to use devastation in huge swaths of the Panhandle and the deaths of Floridians as an opportunity to score cheap political points, that’s his prerogative,” said Scott campaign spokeswoman Kerri Wyland. “Governor Scott has more important things to do – like help the Panhandle rebuild and getting people back in their homes and jobs.”

So Scott is supposedly "hiding from voters" because he correctly chose to step away from electoral politics to preside over a massive recovery effort, in the wake of a devastating hurricane that made landfall in the state he was elected to lead.  This criticism is exactly as moronic and counter-productive as it looks.  It's not the sort of critique that comes from a confident candidate, either.  It seems quite possible that Team Nelson is seeing the same internals that Republicans are, in which Scott has pulled into a slight lead in this race.  Desperate to claw back, Nelson is frustrated that his opponent's actual job currently requires him to devote his attention to helping the people of Florida deal with a disaster, thus making it more politically difficult to launch last-minute partisan attacks.  How tragically inconvenient for Nelson, who apparently also can't comprehend that Rick Scott doesn't control the weather.

So Nelson is embarrassingly reduced to this sort of unseemly and ridiculous sniping, including a gripe that his "career politician" Republican challenger is exploiting the storm recovery for political purposes.  Such whining may be slightly more credible if it weren't coming from an actual career politician (Scott was a massive success in the private sector before entering politics) who recently urged people to contribute to hurricane relief through a portal designed to capture new email addresses for Democratic fundraising.  His faux anger over the timing of an upcoming debate also appears quite bizarre.  The latest poll of the contest shows Scott narrowly ahead and approaching 50 percent.  Note the response to the second featured question:

First #FLSEN numbers since the storm show Rick Scott with a narrow edge over Bill Nelson. Via @StPetePolls https://t.co/ihVa62waro pic.twitter.com/nzICY84PKA

Florida voters approve of Scott's handling of Hurricane Michael by 40 percentage points. Super savvy attack, Democrats.  Still, this stinker wasn't even the worst mistake committed by a Senate Democrat's re-election campaign this week.  Not even close.  That honor goes to Heidi Heitkamp in North Dakota, who paid for an ad that identified female victims of assault without their consent.  Some of these women are furious (including some who were inaccurately labeled as victims, or who aren't Heitkamp supporters), while others are now frightened for their safety:

She says she's terrified for her safety like many other victims because of this situation.

Victim: 'There are people that I'm in hiding from... I didn't realize this until this morning that the town that I live in was also posted on this.'https://t.co/FjgXUwtu84 pic.twitter.com/vy0HuKDxTs

Ironically, this "colossal error" -- to quote Heitkamp herself -- was made by a campaign in a rush to deflect criticism away from their candidate's poorly-reasoned vote against Justice Kavanaugh's confirmation, and to paint her opponent (who made some ill-advised remarks) as, er, insensitive to female victims.  Oops.  For what it's worth, on her Tuesday apology tour, Heitkamp said firing a staffer would be an "age old dodge" from a politician.  On Wednesday, she fired a staffer.  I'll leave you with the GOP's latest ad highlighting yet another string of self-inflicted wounds by a separate Democrat running for Senate -- followed my suggestion for Sinema's campaign:

She should just lean into this theme for the final 3 weeks. Cut a direct-to-cam ‘closing argument’ ad, lighting a cigarette, saying “I really f***ing hate you people,’ then taking a long drag w/ both middle fingers extended. Walk off to “I approve this message” disclaimer. #AZSen https://t.co/fIT2sugR8H

Abort the Mission! Abort!
Townhall
Megyn Kelly explains why a 'first-year law student' could have driven a truck through holes in Cassidy Hutchinson's testimony
Twitchy
Adam Schiff Hardest Hit as Bad News for Capitol Riot-Obsessed Dems Gets Even Worse
Redstate
Dr. Fauci Took Some of His Own Medicine, and It Didn't Go Well
PJ Media