Senate Watch: Good News for the GOP in Tennessee? Worries in Indiana? 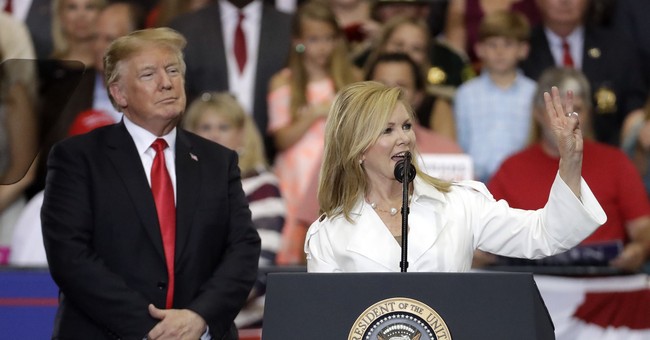 As we continue our focus on crucial statewide electoral contests that will determine control of the United States Senate for 2019 and 2020 -- with the confirmation of scores of conservative judges at stake -- two new data points have emerged.  In addition to some welcome news out of Florida's race, Tennessee Republicans are touting the results of a new post-primary survey tracking the status of the battle to replace retiring GOP Senator Bob Corker.  Democrats recruited their dream nominee (a pretty popular former Governor), who's led Republican frontrunner Marsha Blackburn in most polls for weeks.  Now that the two parties have officially selected their candidates, a new data set gives Blackburn a modest lead:

It's just one poll, but the GOP will happily take it for now.  Bear in mind that President Trump is all-in for Blackburn, which should be a boon to her.  Tennessee is a red state where Trump's approval rating is above water by double digits, according to the Morning Consult results we reviewed yesterday.  In less encouraging news, a conservative polling firm has found Democrat Joe Donnelley with a strong lead over Republican businessman Mike Braun in Indiana's much-watched Senate race.  Given the shockingly scant polling in that state, it's impossible to call that result an outlier, even though the lone previous survey gave Braun a one-point edge.  I'm skeptical that Donnelley has anything even approaching a double-digit lead in Hoosierland, but as a prime pick-up opportunity, Republicans can't take anything for granted.  Incumbents can be hard to defeat, especially when partisan gusts are blowing in the 'wrong' direction.  Donnelley probably isn't doing himself many favors by following Chuck Schumer's marching orders thus far on Bret Kavanaugh's SCOTUS nomination.

Meanwhile, on the House side, Republicans are seeking to make the left-wing's astonishingly reckless single-payer scheme a campaign issue by demanding to know how Democratic backers plan on funding the breathtaking tab:

In Wisconsin, newly-minted GOP Senate nominee Leah Vukmir says she plans to press Sen. Tammy Baldwin, a supporter of the "Medicare for All" fantasy, on this point throughout the fall:

Vukmir, a pediatric nurse turned state legislator and close ally of Gov. Scott Walker (R.), plans to cast Baldwin as a "far left liberal," according to the "messaging preview" her campaign released following her primary victory. Vukmir's campaign says its three main focuses will be on Baldwin's stated support for government takeover of healthcare, her vote for the Iran nuclear deal, and her vote against the Republican tax cuts. The campaign says that Baldwin's early spending in the race before she even had an opponent is evidence that she thinks she's vulnerable..."Senator Baldwin has been sounding the alarms in Washington for months about her campaign, and has already spent $5 million on television because she knows that her record in the Senate, which includes standing with socialist Bernie Sanders in support of a $36 trillion takeover of healthcare, supporting the Iran Nuclear Deal, and fiercely opposing tax reform is out of step with Wisconsin," the campaign writes in its memo. Baldwin was one of 16 senators who came out in favor of Sen. Bernie Sanders' (I., Vt.) Medicare for All plan, and she was the only one of the senators facing a serious reelection fight in 2018.

Elsewhere, Arizona Republicans are hammering the Democratic Senate frontrunner (pursuing the Flake seat) for hunkering down and avoiding voters, the press, and...basically everyone:

Arizona's Senate race, which could end up deciding which party holds power in Congress, features one leading candidate who regularly criticizes the press (Republican Martha McSally) and another who avoids the media like the plague (Democrat Kyrsten Cinema). Trying to report on Sinema’s Senate campaign was like having to deal with an incompetent cable company. Calls and emails to her campaign went unreturned for days. The campaign didn’t provide a schedule of any events during my four days in the state, and a press secretary was unable to name the last campaign event she had held—before emailing me a few recent copies of the congresswoman’s campaign newsletter. This all took place as Arizonans were casting early ballots for the state’s Aug. 28 primary, and less than three months before the midterm elections. After the campaign directed me to a non-campaign event with her Veterans’ Advisory Council at a suburban Phoenix library, the congresswoman’s legislative press secretary said she wouldn’t be answering any questions after the event ended. She speedwalked out of the event, racing to her SUV in less than a minute’s time.

Does Sinema want to win this race by default?  I'll leave you with a new ad running against Jon Tester in Montana, a somewhat under-the-radar matchup. The theme is a familiar one: