Polls: 40 Percent of GOP Voters Would Favor or Shrug Off Russian Help in 2018, Majority of Dems Support Illegal Immigrants Voting 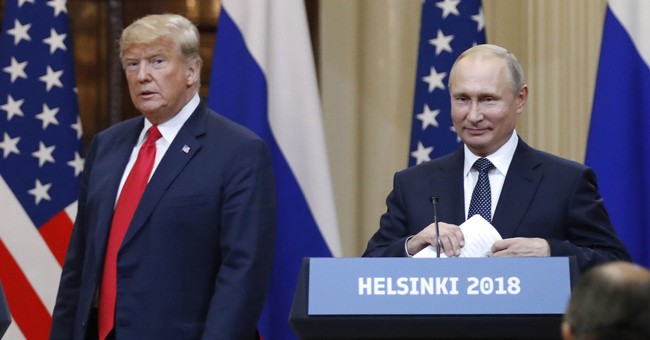 Welcome to a new age of ends-justify-the-means politics, wherein hardcore partisans appear willing to defend virtually anything under the sun if it helps 'their guy' or their team win.  I'm well aware of troll polling, which is often designed to make one side or the other look bad, foolish, or extreme -- which, by the way, doesn't necessarily mean the people answering the questions don't hold some bad, foolish or extreme views.  Examples abound, from the large percentage of Republicans who entertained or embraced conspiracies about Barack Obama's birthplace, to the high number of Democrats who believed insane theories about George W. Bush having advance knowledge of the September 11th atrocities (note to Nancy Pelosi: 9/11 wasn't an "incident").  Tribalism can warp your brain, a weird truth most recently evidenced by this data point, via a Yahoo Finance survey:

40% of GOPs says it would either be "appropriate" or "not a big deal" if Russia helped Republicans hold Congress in 2018 https://t.co/eD4Rzs0byj via @TPM

Sure, we could ask what kind of Russian "help" we're talking about here; would it "just" be social media trolling, or something more sinister -- like hacking emails (which the Russians did) or even compromising voting systems (as the Kremlin attempted to do)?  But the simple and correct answer to the polling question above is that the interference of a hostile foreign power in a US election to assist one party over the other is totally inappropriate, totally unacceptable, and a very big deal that must be dealt with harshly by our government.  Period.  Republicans should believe this as strongly as Democrats, especially because the official Trump argument is that there was no collusion with the Russians, whose malfeasance didn't actually help Trump win.  Yes, the Left's anti-Trump/anti-Russia fever has probably spurred some GOP voters to reflexively answer polling questions like this one differently than they typically would, but for cripes sake, people: The foreign enemy of our domestic opponent is not our friend.

Incidentally, given all the shouting about Russia on their side lately (and I do mean lately), I'd love to meet the 14 percent of Democrats who'd be chill with some electoral aid from Moscow.  As an aside, as I quasi-joked on Twitter, I wonder if liberals would suddenly embrace (broadly popular) voter ID laws if they were presented with legislative titles such as the 'Stop Russians From Voting Act.'  One more point before I turn to another issue: If Putin decided that it was in his interests to help the Democrats win elections, and a bunch of Democratic base voters basically endorsed his corresponding actions, Republicans would be using words like "traitor" to excoriate the Left.  Something is not good or meh if it benefits the party you happen support, but treacherous and outrageous if the shoe is on the other partisan foot.  Allying with Russia to 'own the libs' is disgraceful stuff.  Meanwhile, here's where the Democratic Party's center of gravity is shifting:

File these results in the memory bank for the next time Democrats indignantly bristle at the allegation that they are pro-illegal immigration. The idea they're supporting is deeply unpopular overall, naturally, thanks to overwhelming opposition from Republicans and hugely lopsided disapproval among independents (another survey shows a slim majority of Democrats rejecting the proposal). But here we have an outright majority of Democratic voters whose signaling on immigration now apparently requires them to advocate the franchise for illegal immigrants. They want people who should not be in the country to be able to vote and thus impact elections and public policy.  Why?  Because the hard left's reaction to right-wing anti-immigrant sentiment is to treat even illegal immigrants as heroes (i.e. tribalism), but also because most illegal immigrants would likely cast ballots for the Democratic Party.  Did you break our laws on your way into our country?  Terrific, not only can you stay, here's a voter registration card!  This is myopic, radical madness.  Destroying our national sovereignty to own the cons is disgraceful stuff.

Parting thought: If we get to a point where a critical mass of intense partisans on both sides are willing to believe or defend almost anything in order to secure power, the fate of the republic will lie with independent voters who aren't blinded by outcome-oriented ideology -- but who often don't hold firmly-rooted beliefs or even keep up with current events as much as others.  Gulp.