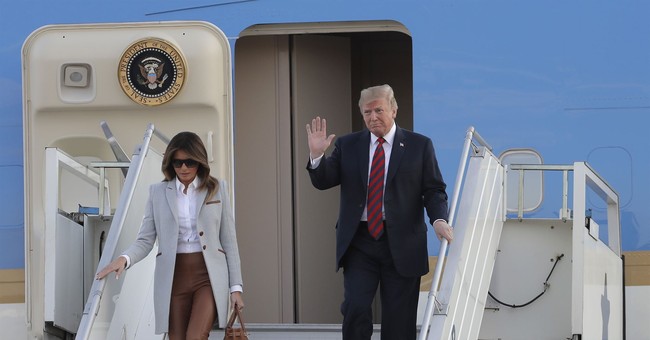 I fully recognize that the robust and growing US economy isn't exactly a front-burner media topic at the moment, but to the millions of Americans who don't follow every twist and turn of major DC stories, it's a huge deal that's having a positive impact on their lives.  The drumbeat of economic progress -- fueled by deregulation and tax reform -- is boosting Americans across every demographic, including groups (low income earners and racial minorities) that are often said to be ignored or harmed by conservative policies.  As we await a highly-anticipated Q2 Gross Domestic Product report at the end of the month, a just-released early indicator appears to fortify expectations of eye-openingly powerful GDP growth:

U.S. retail sales rose solidly in June, boosted by increases in purchases of motor vehicles and a range of other goods, cementing expectations for robust economic growth in the second quarter. The Commerce Department said on Monday retail sales increased 0.5 percent last month. Data for May was revised higher to show sales rising 1.3 percent instead of the previously reported 0.8 percent gain. May's rise in retail sales was the largest since September 2017. Economists polled by Reuters had forecast retail sales rising 0.5 percent in June. Retail sales in June increased 6.6 percent from a year ago...Given the upward revision to May data, the unchanged reading in core retail sales last month likely does not change views that consumer spending accelerated in the second quarter...In addition to the solid retail sales data, a sharp narrowing of the trade deficit in April and May has also bolstered expectations of a strong GDP reading in the second quarter...Consumer spending is being driven by a tightening labor market, which is steadily pushing up wages. Consumption is also being supported by tax cuts and savings.

Economists are expecting a gangbusters GDP report to continue the good vibes created by consecutive excellent jobs reports, the most recent of which revised employment figures upward in each of the previous two months.  Long-stagnant wages are finally picking up steam, too.  In short, virtually all of the data shows that the US economy is cooking with gas, though many experts are concerned that protracted trade and tariff wars could put a tangible damper on the progress.  In fact, there's at least one trade-related clue that strongly suggests that the forthcoming GDP number -- which will almost certainly be unambiguously, very healthy -- could, at least in part, be artificially inflated.  Here's why:

A sharp increase in soybean exports ahead of China’s retaliatory tariffs significantly boosted the second quarter GDP growth. This distortion, however, will be reversed in the third quarter....The rush by US exporters to beat the imposition of retaliatory tariffs on soybeans by China will provide an artificial boost to second-quarter GDP growth, but will become a potentially significant drag in the third quarter...Although overall exports increased by 1.9% m/m in May, half of that gain was due to the rush to ship soybeans and corn before the tariffs hit.

That's a concern worth keeping an eye on (are we ever going to get one of these much-vaunted "great deals" we've been promised? Or just more bitter disputes and retaliation?), but even certain dark linings can't overwhelm America's economic silver cloud. Hires spiked to a 17-year high last month, and "for the second month in a row, there were more job openings than unemployed workers, a situation not seen in decades. During the worst of the recession, in comparison, there were more than six jobless workers for every advertised vacancy."  That's why House Republicans are trying to cut through some of the political noise (perhaps a quixotic endeavor these days) with a messaging campaign designed to remind voters that things are actually going quite well:

“This is a really, really good story to tell. It’s about hard work and the resilience of the American people. In 2016, we offered the American people a positive agenda. We offered, in 2016, the American people A Better Way. We said, here is what we need to do to get the country back on track. And we have delivered on these promises. And the American people are better off now. The country is on a better path now. At home, tax reform has opened the door for an economic resurgence that we are now witnessing. Unemployment is at historic lows. Just yesterday, we saw that new hires hit the highest level in 17 years. Wages are growing. Workers are seeing more money in their paychecks. All of this fuels more confidence and it fuels more economic growth. We’re encouraging people to come off the sidelines and join the workforce."

If this were an economy-centric election cycle, Republicans would be in great shape.  But the emerging picture is much more complicated than that, and the out party stands to gain.  In any case, here's my discussion with House GOP conference chairwoman Cathy McMorris Rodgers about the 'Better Off Now' push.  I'll leave you with Senate Majority Leader Mitch McConnell taking a break from the Kavanaugh confirmation effort to hail the state of the economy:

UPDATE - Breaking today, a survey of economists anticipates expanding employment and economic growth over the next three months (tempered by the trade situation) -- and another business has announced expansion plans, crediting tax reform: