Analysis: The Case Against Exaggerated Pessimism -- Or Optimism -- About the Singapore Summit 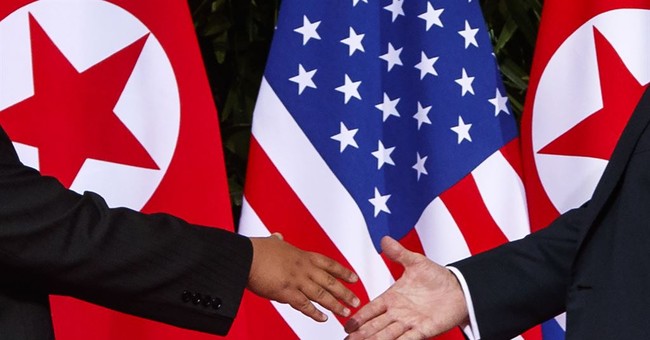 Let's begin by stipulating what a number of observers have been noting for the past 24 hours or so: If this were President Obama meeting Kim, almost everyone on the Right would be excoriating him as a hopelessly weak, tyrant-appeasing neophyte who's more concerned about his precious legacy than either American national security, or the lives of suffering North Koreans.  And Obama's sycophantic echo chamber, including scores of fanboys in the press, would be hailing the historic, forward-looking, Nobel-deserving courage of the American president, whose critics were cynically rooting for war.   Sound about right?  It should.  Instead, we're analyzing President Trump's risky geopolitical gambit, so the above roles have been neatly reversed, more or less.  Partisanship is a potent drug.

In light of conservatives' strident (and correct) criticism of Obama's stated desire to meet with despots without preconditions, and their subsequent (justified) railing against his terrible nuclear deal with Iran, let's try to examine Trump's latest actions on the merits.  Disparate levels of trust and heuristic loyalties obviously play a role in how people are initially inclined to process political developments, but the ultimate wisdom of any course of action cannot be assessed based narrowly on the individual or party pursuing it.  Having watched and read a good deal of coverage of Tuesday's Singapore summit, my mind is being tugged in different directions.  My general verdict is this: I remain hopeful about the possibility of achieving a constructive reset of US-North Korea relations, which may lead to meaningful denuclearization and liberalization.  But that guarded optimism is tempered by deep, deep cynicism about the regime's trustworthiness -- cynicism that the North Koreans have richly earned over recent decades:

I don’t want to be a Debbie Downer here or anything, but North Korea formally pledged denuclearization eight (!) times between 1992 and 2012.

This feels like the Agreed Framework of the 90s all over again. NK gave its word to abandon its pursuit of nuclear weapons. They never intended to keep their word. And then they broke it.

Reagan's famous aphorism was "trust but verify."  With Kim, I'd recommend a tweak: "Hope, don't trust, and verify."  That said, I do not fault Trump for throwing out the status quo playbook, which has led to many years of bipartisan failures vis-a-vis North Korea.  Shaking things up, grabbing Kim's attention, and alternatively using sticks ("fire and fury") and carrots (charm offensive) to land the Hermit Kingdom's dictator at the negotiating table, in person, involved a series of bold strokes.  Ramping up biting sanctions while ratcheting up bellicose rhetoric seems to have spooked the regime, at least to some degree.  Kim released three hostages (let's not forget the one his goons murdered), allegedly destroyed a nuclear test site, and agreed to leave the safety of his country for a face-to-face meeting. For all of this, Trump deserves some real credit.

Critics of this week's historic meeting have made a number of points, some of them valid and stinging, that I'd like to unpack a bit: (1) The optics -- including juxtaposing the US and North Korean flags, and Trump's thumbs-up gesture -- are said to be a massive propaganda coup for Kim's regime.  This is undoubtedly true to some extent, but any major American overture with an eye toward a thaw would provide fodder for the repressive country's state-run "media."  Sure, lending the prestige of the presidency to the package adds a layer of risk, but is it really an unforgivable one?  Allahpundit makes an important point on this front:

I’m also less bothered than some by the propaganda value of the summit for North Korea. These people run the most notoriously Orwellian propaganda shop on the planet; the state itself operates as a cult with Kim as its god-king. The people have been conditioned to believe anything the regime tells them. If Kim wanted them to believe that he’d held a summit with Trump even if it hadn’t happened, his video editors would have spliced together some footage of the two and they’d have put it on state TV. If Kim wanted them to believe that Trump had surrendered the United States to Pyongyang, they’d put that on too. The idea that a state that’s willing to lie to its citizens in the most outlandish ways to secure their loyalty somehow needs a toehold in reality to further aggrandize itself in their eyes is strange to me. The propaganda value of the summit isn’t a steep cost to pay *if* it leads in the long run to NK liberalizing.

If.  Also, though I shared Jonah Goldberg's visceral disgust at seeing Old Glory displayed next to the banner of a totalitarian prison camp of a country, media and liberal squealing about it seems...selective.

(2) The worst element the summit, by far, was Trump's embarrassingly fulsome praise of Kim, including this appalling line:

Trump, who tells ABC News that he 'trusts' Kim Jong Un, says this about the dictator who starves his people: "His country does love him. His people, you see the fervor. They have a great fervor." https://t.co/6nFWaFtIkt

No, no, no.  Kim's country does not "love" him, except under the most perverse of definitions.  Unfailing, slavish 'love' is required of North Koreans, who would decline to participate in the charade at the risk of imprisonment in labor camps or execution.  Kim's gulag is a terrifying, impoverished hellhole.  It's one thing to decide that a path to deescalation and potential denuclearization is worth doing business with a merciless tyrant.  That's defensible strategically, as is completely (or mostly) side-stepping the regime's horrific human rights abuses at this stage, even if that feels like a moral abdication.  Pretending that the merciless tyrant is something other than what he is, and praising the glamorized, airbrushed alternative?  That's indefensible.  It's a damaging, amoral thing for any President of the United States to say.  Buttering up Kim is part of the game; everyone understands that, but there must be limits. Trump crossed a bright line with that statement, renewing worries that he may be intoxicated by the concept of achieving any "deal," no matter the cost, which is precisely what happened with Obama and Iran.  On the other hand, this is a self-aware comment that suggests that if Kim exposes Trump's praise and trust as humiliatingly misplaced, the president could morph back into a very angry 'bad cop' in short order:

"I think honestly he's going to do these things," Trump says of Kim Jong Un, then expresses doubt, saying he may stand before us in 6 months and admit he was wrong. Then adds: "I don't know that I'll ever admit that I was wrong. I'll find some kind of excuse."

One hopes that through all the grinning and handshakes, the point that "fire and fury" could arrive in a heartbeat if the regime is caught lying again was made unmistakably clear to Kim.  Also, it must be said that given the hue and cry (some of it deserved) about potential US capitulations to the North Koreans, this transition certainly has been quite something to behold:

The one thing I find amusing about this summit is how confidently people were arguing not that long ago that Trump would lead to war with North Korea.

(3) Did Trump give up too much, in exchange for hazy, warmed-over, watered-down, oft-violated pledges?  On the surface, perhaps -- but it's too early to tell.  Here is the full "commitment"-related text of the document both leaders signed overnight:

1. The United States and the DPRK commit to establish new US-DPRK relations in accordance with the desire of the peoples of the two countries for peace and prosperity.

2. The United States and the DPRK will join their efforts to build a lasting and stable peace regime on the Korean Peninsula.

3. Reaffirming the April 27, 2018 Panmunjom Declaration, the DPRK commits to work toward complete denuclearization of the Korean Peninsula.

4. The United States and the DPRK commit to recovering POW/MIA remains, including the immediate repatriation of those already identified.

In subsequent comments, Trump stated repeatedly that his expectation is total denuclearization, presumably including inspections and verification, before which no sanctions relief would arrive. (Is this what Kim has in mind, too?)  For now, as others have put it, the new arrangement amounts to a mutual freeze: NoKo is freezing its nuclear testing and development, and the US is suspending its joint military exercises with the South Koreans -- whose leader is sounding generally upbeat.  Trump also reportedly floated other US concessions, perhaps including drawing down American troop levels on the peninsula down the line, but those are not firm commitments.  Crucially, what Trump did "give up" are temporary, instantly-reversible gestures.  If Kim's representatives help hammer out a strong, binding agreement, and Kim lives up to the spirit of his assurances to Trump, the process moves forward.  If they lie, cheat, or provoke, America can effortlessly snap back to its previous posture; in the meantime, Pyongyang will have to prove its early-stages mettle over the course of months.  Bear in mind, the pact quoted above is not a final product.  Another passage from that document:

Having acknowledged that the US-DPRK summit — the first in history — was an epochal event of great significance in overcoming decades of tensions and hostilities between the two countries and for the opening up of a new future, President Trump and Chairman Kim Jong Un commit to implement the stipulation in this joint statement fully and expeditiously. The United States and the DPRK commit to hold follow-on negotiations, led by the US Secretary of State, Mike Pompeo, and a relevant high-level DPRK official, at the earliest possible date, to implement the outcomes of the US-DPRK summit.

Many critical details are yet unresolved, and will be addressed in upcoming negotiations, spearheaded on the American side by Sec. Pompeo. In other words, the much-discussed agreement was little more than an agreement to pursue and execute a specific and granular...agreement. Its apparent purpose was to build and maintain momentum. As I said before, it's not the finalized version. If it were, it would be woefully inadequate.  But it's not: The particular contours of North Korea's mandatory concessions are still 'to be determined.'  Let's see what those determinations actually end up looking like.  And in the interim, let's also look for concrete steps beyond words and pledges to talk more.  Abusing 'the clock' at the West's expense is a long-favored North Korean game.  As for premature Iran deal comparisons, I'll leave you with this.  The man has a point:

The notion that the US merely returned money that rightfully "belonged to" an anti-American regime that is consistently assessed to be the top state sponsor of global terrorism is a credulous, simplistic talking point.  It also glosses over how Iran has and will continue to apply significant sums of those unfrozen assets.