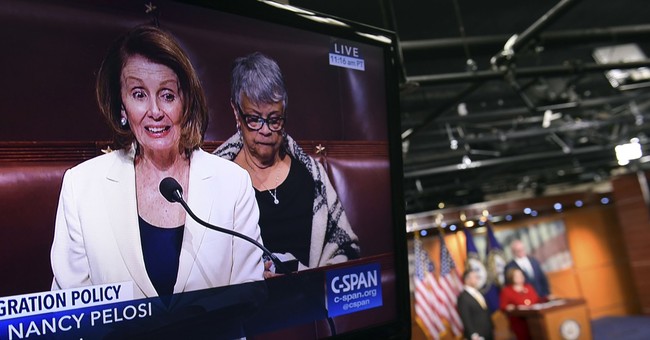 If you missed it -- and most people did -- Nancy Pelosi exploited an abstruse rule to exercise her leadership prerogative to speak on the House floor for hours on end yesterday.  During her eight hour marathon, she demanded that Paul Ryan schedule DACA votes, vowing to block budget votes until he did.  She finally ran out of steam and yielded the floor.  Considering that Chuck Schumer endorsed a DACA-free spending agreement on the very same day, what exactly did she accomplish?  Even the members of her own caucus aren't entirely sure.  This is fun:

For some members on both ends of her caucus who tuned in, the daylong protest did little to repair the fissure pitting lawmakers against one another on immigration and budget talks. “There’s all kinds of ways, I assure you, that leadership exercises its influence — the least of which is a floor speech,” said Rep. Luis Gutiérrez (D-Ill.), an unabashed critic of leadership on immigration issues...In interviews will nearly a dozen House Democrats, many who requested anonymity to speak candidly, several called the speech an attempt by Pelosi to shore up support with the progressive base angry by congressional inaction on Dreamers. By agreeing to the spending caps deal, Gutiérrez and others argued, Democrats gave up all their leverage to force Republicans into serious negotiations to shield Dreamers from deportation...Some centrist-minded Democrats said Pelosi’s daylong protest could — by calling attention to the failure to provide relief for Dreamers — make it that much harder for vulnerable members to vote for the budget deal. “This stunt ... had nothing to do with protecting vulnerable members who have to take a difficult vote,” said one moderate lawmaker who asked not to be named. “Working out this deal and then saying she’s not going to vote for it? Come on. She was at the table.”

The first quote is from immigrants-first extremist Luis Gutierrez, bashing Pelosi's display as empty and toothless. The second is from an anonymous moderate, griping that by drawing a pointless line in the sand on DREAMers, Pelosi was only setting up more centrist members to incur the wrath of lefty immigration activists upon inevitably supporting a 'sellout' budget deal that excludes DACA (Democratic votes will be necessary to pass the plan and avert another shutdown).  Why would a leader like Pelosi risk alienating multiple factions of her own party by pulling a PR gimmick like this?

Simple: She knew the government funding/DACA cave was coming, and she wanted to mitigate the base fallout by signaling to an angry constituency (that has heckled her on the issue) that she's on their side.  Hence the big, long speech.  Tactically, it was a transparent gambit, and it failed.  Her performance was totally overshadowed by other news of the day, and no one was buying it.  To quote the unnamed lawmaker in the Politico piece, "c'mon, she was at the table."  She helped design the agreement that Schumer full-throatedly endorsed.  Her opposition to it was all for show.  Her team wasn't even whipping votes against the plan.  Republicans, meanwhile, were in full troll mode, sarcastically "supporting" Pelosi's stemwinder:

Every minute you’re in front of the cameras, you make our job easier.

As for the compromise itself, it's...not good.  Defense hawks will be pleased, and Sec. Mattis is quite happy, about the boost in defense spending -- but breaking the military sequester caps came at a price.  Democrats wanted a corresponding increase in domestic spending, too, but Republicans got them to agree to less than one-for-one parity.  Still, the result is an end to fiscal restraint across the board, and a bloated new baseline for future federal outlays.  The 'small government' party is in power, and the spending arrow is pointed up, up, up:

The unified GOP govt has:

-Busted spending caps by $300 billion
-Raised debt limit with no corresponding cuts
-Rejected a 0.1% cut to entitlement growth
-Moved towards reinstating earmarks
-Has its Prez. take Social Security & Medicare reform off the table

6) Undermines and reverse Budget Control Act
7) Adds $300-$400 billion to the debt
8) That's on top of the $1.5 trillion of tax cuts we passed
9) And really this sets the stage for $1.5+ trillion of spending increases
10) Oh yeah, and it includes more tax cuts and IPAB repeal https://t.co/GzphsS6hTI

Cutting taxes is great (really!), but doing so while spending keeps soaring and a debt bomb is still looming is whistling past the fiscal graveyard.  The debt crisis matters.  Republicans at least pretended to understand that during the last administration (whereas Democrats have zero interest in dealing with this serious problem in a meaningful way -- occasionally whimpering about deficits from time to time, as part of transparent 'kitchen sink' attacks on GOP proposals).  Jim Geragthy runs through some of the positive aspects of the deal, including a look at how the specific increases in domestic spending are targeted, as well as the repeal of Obamacare's 'IPAB' rationing board.  But National Review's editors focus on the agreement's fundamental flaw:

We are skeptical that the deal will include any meaningful budget offsets. Budget-cap agreements in the past have come with offsets that tend to manifest as accounting gimmicks rather than actual spending cuts. Even small changes in the future growth of entitlements would counteract the new spending in this bill, but there is no serious appetite for that within the GOP. Republicans interested in passing major conservative reforms in 2018 — which could be the last chance for years, if Democrats succeed in taking the House later this year — should reject this deal and push for something better. Another year of unified Republican control of the elected branches of government in Washington is a terrible thing to waste.

Nevertheless, this is increasingly looking like a done deal, considering that both Schumer and McConnell are in support, as Paul Ryan tells Hugh Hewitt that the votes are probably there.  Here's Ryan promoting the plan earlier:

And by the way, if and when another funding gap is avoided, and a two-year outline is adopted, guess what comes next? Mitch McConnell made a promise, and you'd better believe Democrats (and some Republicans) will push to make sure he keeps it.  For what it's worth, in the clip above, Ryan says the House will vote on a viable DACA plan, too.  I'll leave you with this.  Attagirl, Nance:

A message from a House Democratic lawmaker who is ... less than thrilled with Pelosi’s marathon speech on Dreamers today. ?? pic.twitter.com/OoOudvgHJA

Biden Announces New Role for Kamala Harris and the Supreme Court
Townhall
Oops: White House issues a 'corrected' chart showing economic growth during Biden's first year
Twitchy
Disney Ditches Potential Dwarfism Community Actors After Peter Dinklage's Woke Rant Over 'Snow White' Remake
Redstate
What if They Had a War But There Was No One There to Begin With?
PJ Media