NYT Column: Actually, Conservatives Have a Point. Liberals' #MeToo Hypocrisy is a Real and Serious Problem. 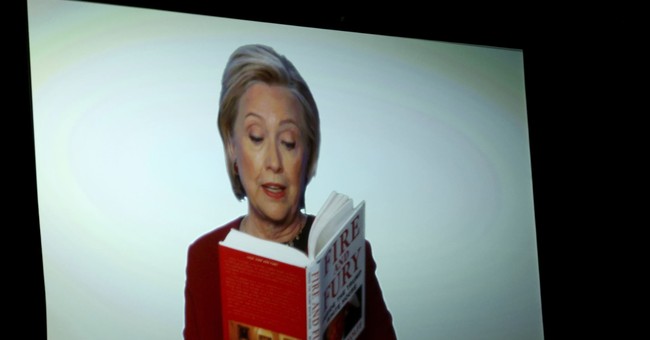 Two items for you here, as politicos nationwide nurse their post-State of the Union hangovers.  Each one is noteworthy because of its source.  The New York Times editorial page is not generally known for its proclivity to defend conservative Republicans, especially members of the Trump administration (although this experiment was genuinely fascinating).  Indeed, in spite of the unhinged fever dreams of some leftists, the Times is an established bastion of American leftism.  But one of the Old Gray Lady's (non-leftist) editorial contributors couldn't abide the Left's glorification of a disreputable author who's peddled baseless and prurient trash about Amb. Nikki Haley.  Bari Weiss writes:

Ms. Haley has not taken well to the insinuation [by Fire and Fury author Michael Wolff] that she’s sleeping with the president...[she] called the rumor “highly offensive” and “disgusting.” She told Politico: “At every point in my life, I’ve noticed that if you speak your mind and you’re strong about it and you say what you believe, there is a small percentage of people that resent that and the way they deal with it is to try and throw arrows, lies or not.” So it’s not difficult to imagine how Ms. Haley might have felt when she watched the Grammys Sunday night. At one point in the show, James Corden, the host, set up a bit in which various celebrities — Cardi B, Cher, Snoop Dogg, John Legend — audition to be the narrator of the audiobook version of “Fire and Fury.” The final reader, who slowly reveals her face from behind the hardcover, is Hillary Clinton. Yes, the very same politician who, just two days before the awards show, was exposed as overriding the advice of her campaign manager in 2008 to protect a “faith adviser” who had repeatedly sexually harassed a young female subordinate.

I checked feminist Twitter. Would the Grammys be called out for hypocrisy? Or at least for tone-deafness? Crickets. Not so Ambassador Haley, who shot back immediately: “I have always loved the Grammys but to have artists read the ‘Fire and Fury’ book killed it. Don’t ruin great music with trash. Some of us love music without the politics thrown in it.” Commentators jumped on Ms. Haley as if she were suggesting that there ought to be, or has ever been, a bright line between music and politics. But Ms. Haley is not a stupid woman. It’s a bad-faith reading of the tweet to assume that she’s unaware of the music of Woody Guthrie or Nina Simone or Johnny Cash and virtually everyone else in the American songbook. The “politics” in question surely involved the star treatment of a questionable book written by an author trying to increase sales by hyping unsubstantiated rumors.

That's right, much of the media and the 'blue checkmark' brigade attacked Haley for objecting to the Grammys' promotion of an ethically-questionable man peddling scurrilous rumors about her personal life -- or "slut shaming" her, as the Times columnist puts it.  Conservative writer John Podhoretz is disgusted by the injustice of it all:

Let's get this straight. Michael Wolff retails disgusting rumors re Nikki Haley. His book is read on Grammys. Haley says it ruined the show for her. And mainstream media people--who know the book is unreliable--attack HER. And then they want people to think they're not biased.

Yes, he has that all straight.  Well said.  And he's not the only one who noticed.  Weiss concludes that perhaps the Right's "fundamental complaint" about outrageous double standards in the endless 'war on women' cultural skirmishes is well-founded:

There’s a broader lesson here. For years, the fundamental complaint of the right in the culture wars has been that the left is hypocritical, and the Nikki Haley episode perfectly confirms the point: A prominent Republican woman is smeared. The author who does the smearing is celebrated by all the A-listers, including the most prominent Democratic woman in the country, who herself has a history of giving a pass (or worse) to men accused of sexual assault and harassment. And yet the arbiters of American culture cheer the Democrat and, in the words of the actor Don Cheadle, tell the Republican who has the gall to defend herself: “Sit down, girl. You’re drunk.” In the Trump era, the left has smartly and justifiably seized a moral high ground that the right has abandoned by its embrace of the president. That’s a high ground the left cannot hold if it embraces subtle double standards that it would never accept for a moment if the woman in question was a Kirsten Gillibrand or a Kamala Harris. When Matt Lauer subjected Hillary Clinton to a harsh interview, within 24 hours it was common knowledge that it was evidence of misogyny. But when Nikki Haley is smeared with the most base, sexist lie, it’s met with little more than a collective shrug.

The second, related item is this Daily Show segment roasting Hillary Clinton over her protection of a credibly-accused sexual harasser (her longstanding modus operandi) during her 2008 presidential campaign.  After this unseemly episode was exposed a few days ago, Mrs. Clinton took to Twitter to issue pathetic non-apologies, after which her Grammys cameo aired.  Host Trevor Noah, who very occasionally skewers the Left, was decidedly unimpressed with her performance:

Noah begins by mocking Haley (evidently unaware of the context of her entirely justified complaint, laid out beautifully by Weiss above) and taking shots at Donald Trump, Jr. (because apparently no late night comedy bit is ever allowed to exclusively hammer Democrats) -- but he eventually gets around to scolding Hillary for her handling of the 2008 harrassment incident, and her pitiful response upon getting called on it.

Parting quotes, first from Noah: "If Hillary had fired him, she would have been protecting many women instead of just herself."  And lastly, from the Post's Ruth Marcus, who labels the episode as just the latest example of a "trademark Clinton failure to take personal responsibility; the allergy to owning up to error; the refusal to cede any ground, no less apologize; the incessant double-standarding, with different, more forgiving rules for the Clintons and their loyalists."