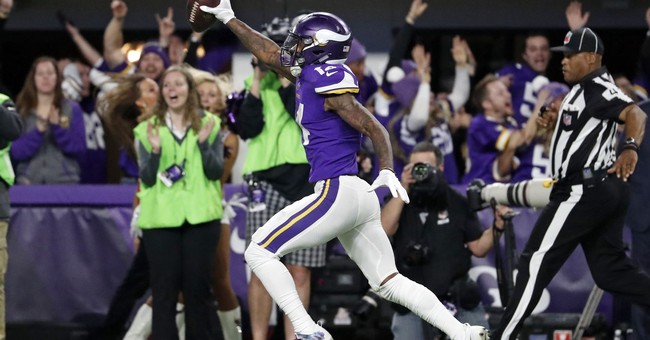 Because it's a Monday of a holiday weekend -- and because the final play of last night's game was as astonishing as any I can remember -- please enjoy the thrill of victory and agony of defeat, as described by the radio play-by-play broadcasters for the Minnesota Vikings and New Orleans Saints, respectively. For context, the Vikings blew a large first half lead to fall behind late in the game, risking another postseason choke job.  But they rallied to kick a go-ahead field goal with a minute-and-a-half to play.  The Saints marched down the field on the ensuing possession, however, re-taking the lead on a field goal of their own with just 25 seconds remaining.  Out of timeouts, and with the ball in their own territory, it looked like Minnesota would need a long completion and a clock stoppage to even have a shot at answering back with the game's third field goal in the span of 90 seconds.

Here's the final play of the game, engineered by the Vikings' journeyman quarterback, and accentuated by one of the great defensive secondary meltdowns in NFL history.  Up first, the national television call from Fox's Joe Buck, just so you can see what happened for yourself (content warning for Saints fans):

Surreal. I was watching the game live, as a relatively impartial observer, and my reactions over the span of about three seconds were as follows: (1) "Oh!" when Diggs made the initial catch, then (2) "get out of bounds!" so that the clock wouldn't expire before a field goal could be attempted, (3) then "OH!" when I realized there were no defenders back there to stop him.  Purple pandemonium. Minnesota's radio crew understandably reacted with shouting euphoria, so much so that I'm not entirely sure that a listener could have discerned exactly what was happening (aside from something very good) as the shocking play unfolded:

Kudos to Paul Allen for instantaneously dubbing the play the "Minneapolis Miracle," a fitting moniker. Finally, here's the New Orleans radio call, which is laudably professional, given the circumstances:

If you listen carefully, you can hear the incredulous color analyst muttering "are you kidding me?" as the Vikings' receiver dashes for the winning score, punctuated with the play-by-play man's emphatic "are you kidding me?" immediately followed by his partner's repetition of the phrase.  Brutal.  Sorry, Saints fans, the Vikings weren't kidding.  This was, ahem, not a drill.  Sports drama at its finest.  Parting thought: Despite the incredible finish, how significant was TV viewership for the game?  NFL playoff ratings plunged by double digits year over-year during last weekend's wild-card games:

Via @instapundit, NFL ratings for the wild-card playoffs look ... weak. Best case was an 11% drop from last year, and one game lost 21% of last year's audience.https://t.co/n4LfU0xYHW pic.twitter.com/qhZhXKdzDc

We'll know if they bounced back this past weekend soon enough.  I'll leave you with this piece of context:

While ratings were down, the NFL still accounted for 74% of the most-watched TV programs of 2017 https://t.co/x0Y4azXaA7

UPDATE - This is a very cool angle of the play and crowd reaction: