By the Way, the Latest Democrat Ensnared in Perv-a-Thon is an Ex-Federal Judge, Impeached for Corruption 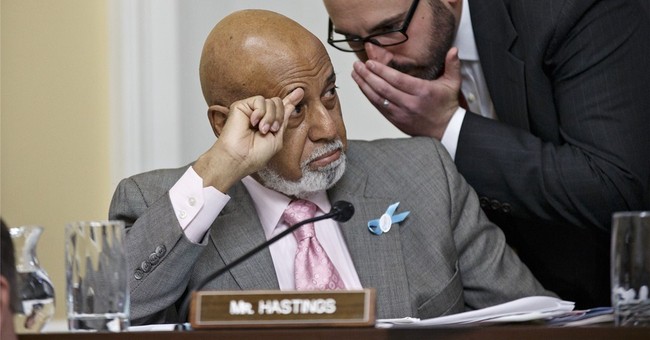 Tim mentioned over the weekend that Florida Democrat Rep. Alcee Hastings is the latest political figure who's been exposed over sexual misconduct claims (a judge on the Ninth Circuit Court of Appeals is also in hot water), yet another addition to the pervy conga line snaking its way through Capitol Hill.  If the rumor mill is accurate, he won't be the last.  A woman who accused Hastings of sexual harassment was secretly paid a $220,000 settlement by taxpayers in 2014.  The Florida Congressman insists he's innocent, and claims he wasn't even aware that the payment had been arranged:

Winsome Packer, a former staff member of a congressional commission that promotes international human rights, said in documents that the congressman touched her, made unwanted sexual advances, and threatened her job. At the time, Hastings was the chairman of the Commission on Security and Cooperation in Europe, where Packer worked. Hastings has called Packer’s charges “ludicrous” and in documents said he never sexually harassed her. “Until this evening, I had not seen the settlement agreement between the Commission on Security and Cooperation in Europe (CSCE) and Ms. Packer,” the congressman said in a statement Friday night. “This matter was handled solely by the Senate Chief Counsel for Employment. At no time was I consulted, nor did I know until after the fact that such a settlement was made.” Hastings said that the lawsuit that Packer filed against him and an investigation by the House Ethics Committee were ultimately dismissed. “I am outraged that any taxpayer dollars were needlessly paid to Ms. Packer,” he said.

Bear in mind that abruptly-"retired" Michigan Democrat John Conyers initially tried to plead ignorance, too, but that story quickly fell apart.  Then again, Hastings now joins Texas Republican Blake Farenthold in emphasizing his innocence by pointing to an ethics investigation that cleared him.  The allegations against Farenthold were probed by the hyper-aggressive Office of Congressional Ethics, which unanimously voted in his favor after reviewing the facts.  The House Ethics Committee -- a separate oversight body, which apparently exonerated Hastings in his harassment case -- is now taking up the Farenthold matter.  This begs the question: If both Congressmen received green lights from ethics investigators, why and how were their accusers paid more than $300,000 combined in public dollars?  The secrecy, opacity and inscrutability of this process is unacceptable.

And I'll just add that I'm not exactly willing to take Alcee Hastings' word as gospel in his case, given his checkered history of public service.  Hastings was removed from his federal judgeship in 1989 by the US Senate, which convicted him on eight articles of impeachment, including bribery.  Hastings had been acquitted in a criminal trial six years earlier, but evidence later emerged that he'd lied and provided false documents in those proceedings, leading to Congress throwing him off the bench.  This 2006 National Review piece includes many more sordid details of the case, including Hastings' efforts to avoid the FBI.  After being forced out of his judicial position in disgrace, amid the stench of corruption and dishonesty, Hastings turned around and ran for Congress as a Democrat.  He won the party's nomination and the general election, and has been a reliable vote for Democratic leadership ever since. Fun addendum: Hastings -- who still owes millions in legal fees from his corruption defense -- devoted his efforts a few years ago to advocating that members of Congress receive a pay raise.  So forgive me for declining to afford Rep. Hastings the benefit of any doubt here.

The Hastings example is particularly useful these days because part of the (deserved) knocks against Roy Moore is that he was twice removed from the bench for refusing to comply with the rule of law -- one of several reasons he's unfit to be a Senator, in my view.  As Democrats attempt to claim the moral high ground on sexual misconduct and related issues, they're hoping voters will have a robust appetite for forgiving hypocrisy and double standards.  As we've seen for decades in Hastings' case, they've been more than happy to endlessly support and re-elect their own disgraced ex-judge who sold his office and lied about it (and who may or may not be a sexual harasser to boot).  Speaking of which, I remain curious to see how the party handles a harasser abuser in their own ranks who doesn't currently occupy a safely blue seat.  Franken and Conyers are expendable, as they'll be promptly replaced with liberals.  How will the party respond if a seat is realistically at stake?  Might this episode provide a relevant clue, or have the rules truly and rapidly changed?  I'll leave you with two US Senators reacting to "Pervnado," including Alabama's senior Senator explaining why he couldn't vote for the Republican on the ballot in his own state, and socialist Bernie Sanders warning about due process concerns.  Bernie has a point, but let's not forget his response to the Trump administration restoring due process protections and ending gross abuses against accused college students:

Alabama's senior GOP senator, Richard Shelby, unloading on Roy Moore in intvw w @jaketapper: "When it came to the 14-year-old story, that was too much for me...I couldn't vote for Roy Moore...The state of Alabama deserves better...I think the Republican Party can do better."

Democrat Senators, who are public servants, deserve due process.

Due process for elected Senators but not for powerless and dubiously-accused college kids: "Social justice," or something.  By the way, Richard Shelby believes the accusations against Moore are disqualifying, but many (most?) Alabama Republicans do not.  How are they justifying their decision to pull the lever for this man?  All sorts of ways.  I'll call this extraordinary, and leave it at that:

ROY MOORE BACKERS:
>"40 years ago in Ala., there's a lot of mommas & daddies that'd be thrilled that their 14-yr-old was being hit on by a DA."
>"This man has more integrity than the entire Congress rn. Don't fall for the @GeorgeSoros assassination plan."pic.twitter.com/6eH6ZHdcre

Share this on Facebook
Tweet
No, Kyle Rittenhouse Being Found Not Guilty Did Not Cause the Buffalo Shooting
Julio Rosas
Here We Go Again: Yet Another Democratic Politician Makes a Fool of Themselves Over Banned Books
Rebecca Downs
'It's Just Incompetence': There Were Red Flags Everywhere With the Buffalo Shooter
Matt Vespa