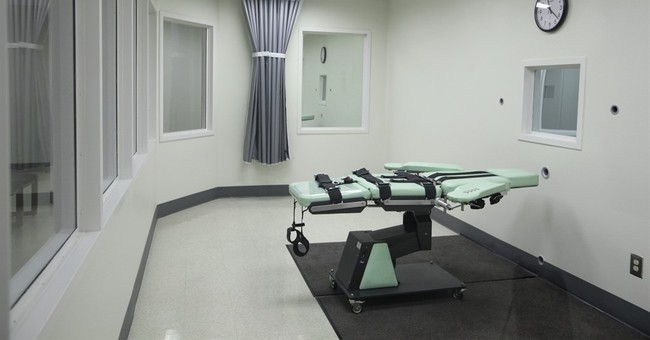 One of my ideological heterodoxies is opposition to capital punishment, a position I adopted in my early 20's after reading the book Death and Justice and looking into a number of verified wrongful conviction cases.  The possibility of the government executing an innocent person became too much to accept (I'm generally suspicious of government infallibility anyway, plus more than 150 wrongfully-convicted and exonerated people have been released from death row in America since the early 1970s.  Some of the (potential and disputed) racial disparities at play bothered me, too.  So, I turned against the death penalty -- not in principle, but in practice.  What does that mean?  It means that while I'm not fundamentally opposed to the notion itself of the government putting to death someone convicted of horrible crimes, I see the possibility of doing so unjustly or unfairly as an unacceptable risk under the current system.

In a 2011 column about a capital punishment case in Georgia, I wrote that perhaps my support for the death penalty could be restored if the 'burden of proof' threshold for an execution were higher than the "beyond a reasonable doubt" standard for conviction.  Accidentally imprisoning someone for a crime he or she did not commit is both theoretically and practically a reversible error.  Ending someone's life is not.  I'm not an attorney, so I'm not equipped to provide specifics on how the legal mechanisms would work, but generally I'd recommend a level of proof that surpasses virtually all doubt.  Someone who would fall into this category is an admitted, remorseless killer who would kill again, if given the chance -- which brings us to the man in NYPD custody who intentionally and calculatingly murdered and maimed by plowing a rented truck through a bike lane in lower Manhattan, eventually slamming into a school bus.  The perpetrator of this terrorist attack pledged allegiance to ISIS, shouting 'Allahu Akbar' after snuffing out eight innocent lives.  And he's reportedly pretty damn pleased with himself:

Latest from @cbsnews: NYC attacker bragging about attack in hospital; pleased with his "success," says crashing into school bus an accident--meant to run over more people. Knives recovered from vehicle along w/ 10-15 pieces of paper where he wrote that ISIS will live forever.

Bragging.  Wished he'd run over more people.  Satisfied with his "success," which included extinguishing this woman's life, just to select one of the heartbreaking stories from Tuesday:

This is enraging.  There is no doubt about his man's culpability; he's on video.  He's proud of his death cult-inspired actions, and would undoubtedly kill again.  He deserves death, and erasing him from this earth post-conviction would not at all ruffle my sense of justice.  This is a case in which capital punishment is both justified and just.  And richly earned.  But what about the president's idea about possibly sending this piece of filth to the enemy combatant detention facility at Guantanamo Bay (from which he's retreated a bit)?  John McCain is on board with treating him as a combatant, too.  I'm in favor of keeping Gitmo up and running, I've defended the limited use of enhanced interrogation techniques against high-level jihadists, and I believe that treating the fight against radical Islamist extremism as a law enforcement enterprise is a grave mistake.  Nevertheless, not so fast, says conservative writer Gabriel Malor -- a government lawyer by trade -- and I'm inclined to agree with his argument:

This is not well thought out. First, you do not want to live in a country where the gov't can just disappear residents. For obvious reasons. https://t.co/5FUbnEXHVr

It would take either a constitutional amendment, or SCOTUS overturning sixty years of precedent. Years of effort or litigation for what?

Fox News legal analyst Judge Andrew Napolitano seems to concur (skip ahead to the 1:40 mark for the relevant piece):

“About Gitmo, this person, as horrific as he is, is a lawful American resident. He has the same rights, except for voting and running for office, as the rest of us. There is simply no provision for terminating his Constitutional rights by putting him in the hands of the military and taking him to Gitmo...if they send him to Cuba, it will be unfair, unlawful, and unconstitutional.”

We can argue about whether this man should have even been allowed into the US, and whether it's long past time to reform or axe the "diversity lottery" visa program.  But this human debris holds a valid US green card.  The rule of law and the constitution must prevail, even when -- or especially when -- the understandable and natural passions of the moment seem to cry out for expedient and emotional exceptions.  That said, I'll leave you with this worrisome side effect of that legal dynamic: "If the touchstone for where to send Saipov is where he committed his act, namely, inside the United States instead of abroad, then by granting him greater legal protections than Gitmo detainees you’re actually incentivizing jihadis to try to kill Americans on U.S. soil instead of on the battlefield. Shoot a bunch of Marines in Afghanistan and get captured and it’s off to Cuba; kill a bunch of office workers on Wall Street and get captured and you’ll have a lawyer and hearings on the docket at the federal courthouse in Manhattan in no time."  In this case it's not just about the location of the attack, it's also about the legal status of the attacker.  Parting thought: Tainting potential jury pools with presidential pronouncements like this is unwise:

NYC terrorist was happy as he asked to hang ISIS flag in his hospital room. He killed 8 people, badly injured 12. SHOULD GET DEATH PENALTY!

Bill Maher Knows Where Progressives Are Going to Blow It on Abortion
Townhall
The lackluster attendance at abortion rallies in Georgia and Oklahoma should be a warning to Dems
Twitchy
Joe Biden and Democrats Stare Into the Abyss After Latest Poll Drops
Redstate
Astonishing Testimony From Dr. Birx Lost Amid Landmark SCOTUS Rulings
PJ Media