Gallup: As Other Sports 'Hold Steady,' the NFL is Losing Fans 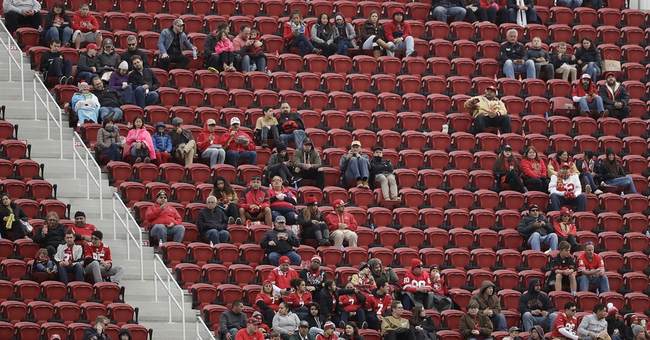 I suppose the prevailing National Thing To Be Outraged About has already shifted away from the NFL anthem brouhaha (with a brief re-ignition over the Pence 'stunt'), and onto the firestorm over serial predator (and now repeatedly-accused rapist) Harvey Weinstein -- but here's a coda to the former controversy, in case anyone is still interested.  In recent days, the league's commissioner and owners abandoned a previously-unified posture, instead ramping up criticism of kneeling during the national anthem, and discussing potential sanctions against future violators.  The New York Times noted the dramatic shift in tone and substance in an article last week, as others declared President Trump the victor in this culture war skirmish:

By appearances anyway, the N.F.L. was one big family two weeks ago. After President Trump urged owners to fire players who did not stand for the national anthem, everyone from Commissioner Roger Goodell to the 32 team owners to the players and coaches locked arms, in many cases literally, in defiance and unity. That unanimity has all but vanished. As the president continues to harangue the league over the anthem, and a number of fans across the country express displeasure with the handful of players who continue to kneel during the anthem, a growing pool of owners is trying to defuse the politically charged issue, even if it means confronting the players the owners previously sympathized with. One of the most powerful owners in the league is now speaking openly about benching playerswho do not stand for the anthem, and Goodell, who said previously that players had a right to voice their opinions, is siding with the owners opposed to letting the players demonstrate. The owners plan to meet next week to establish what to do about the anthem gestures. “Like many of our fans, we believe that everyone should stand for the national anthem,” Goodell said in a letter sent to owners on Tuesday.

The league stopped short of issuing an ultimatum, but they've started more forcefully pushing back against kneeling, for reasons explained below.  Columns with titles like, "The NFL Beat Donald Trump. Soundly" are giving way to pieces called, "How the NFL Lost to Trump."  Polling has consistently showed a majority -- often a large majority -- of Americans (and especially sports fans) disapprove of anthem kneeling, even though most also oppose Trump's suggestion that protesting players should be thrown off of rosters.  In some respects, Trump wading into the issue has galvinated more support for the divisive demonstrations, by turning them into something of a partisan litmus test for a certain percentage of the football watching population.

But that sword has cut both ways, as the NFL has no doubt learned, hence Roger Goodall's new stance.  Beyond angry displays from fans, sliding television ratings, and polling data suggesting that a portion of fans now intend to watch less of the game due to this Star Spangled Kerfuffle, various commentators reacted to last week's conspicuous turn by speculating that the league must possess some internal data pointing to serious and possible lasting erosion of the brand.  Sure enough, another New York Times story shows how how the NFL has improbably managed to become one of the most polarizing products in America.  The country's top sport found itself caught in the crossfire of intense partisan tribalism, and is paying a heavy price:

About three weeks ago — before President Trump said that N.F.L. owners should fire players who kneel during the national anthem — Democrats and Republicans held relatively similar views about the league. About 60 percent said they viewed it favorably, while about 20 percent said they viewed it unfavorably, according to daily online surveys conducted by Morning Consult, a polling, media and technology company. Since Mr. Trump’s remarks, though, many of his supporters have changed their attitudes. Trump voters are now much more likely to say that they view the N.F.L. negatively, reflecting a sharp change around Sept. 23, when Mr. Trump criticized the players at a speech in Alabama...The N.F.L. is now among the nation’s most divisive brands, behind Trump Hotels and a handful of media companies, including The New York Times.

This is an eye-popping chart:

Fresh Gallup numbers also help explain why the NFL brain trust must be sweating bullets these days.  Fan engagement across virtually every major sports remains stable.  But pro football?  Not so much:

The cause behind the Olympic sports drop-off is obvious: The previous data point comes from 2012.  The summer olympics were held that year in London.  By contrast, 2017 is an olympic off-year, on the heels of scandal-plagued summer games in Rio.  Every other sport polled either saw negligible changes over the last five years, or experienced a small uptick in interest.  The lone, glaring exception is NFL football, with that decline driven overwhelmingly by Republicans and Independents (recall that very much unlike sports journalists, sports fans generally lean slightly rightward).  Now that former quarterback and lightning rod Colin Kaepernick is inserting himself back into the news, this whole drama may receive another big round of media attention:

JUST IN: Kaepernick to file grievance against NFL owners for collusion in keeping him out of league: report https://t.co/2Mq8fPVxtZ pic.twitter.com/GszokjekO5

In spite of the many assertions that the anthem protests have nothing to do with the anthem or flag, Kaepernick's own words at least partially belie that spin. Other elements of his behavior and preening are also very off-putting to many.  The last thing the NFL probably wants right now is a brighter spotlight on this guy.  But you can't always get what you want.  I'll leave you with Allahpundit pointing out the silver lining in all of this, at least from Roger Goodall's perspective: "It’ll be awhile before NFL ratings dwindle to MLB levels. Case in point: Last night’s Thursday Night Football game between the Panthers and Eagles drew higher ratings than two of the seven games of last year’s curse-buster World Series between the Cubs and Indians and higher ratings than all but two games of the previous *four* World Series before that."  Even with the deterioration, the NFL is still king.  But a weakened one, grappling with a lot of angry subjects.  For what it's worth, a small smattering of players knelt yesterday, but the ranks of NFL players participating in that form of protest has dwindled considerably since the apex of the controversy.

Share this on Facebook
Tweet
U.S. Officials Alerted to 'Imminent Radiological Threat' at Chinese Nuclear Plant
Spencer Brown
As Pentagon Is Transformed by Woke Left, Here's What Replaced a Military History Lesson for Some US Marines
Matt Vespa
'Unredacted with Kurt Schlichter': Ron DeSantis or Donald Trump? We Need Who Can Win