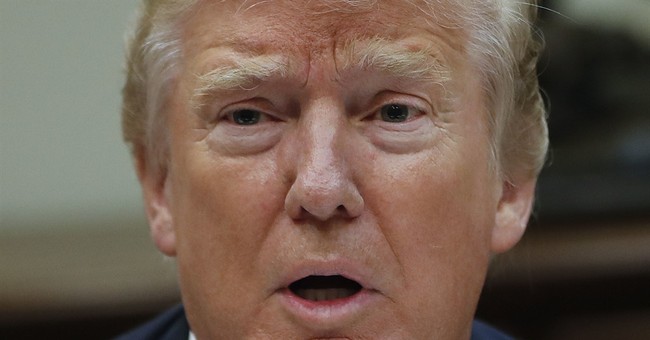 Writing at the Washington Examiner, conservative columnist Quin Hillyer lays blame for the Republican Party's healthcare breakdown on President Trump.  While he makes a number of reasonable points, I think his conclusion is misplaced, for reasons I'll discuss in a moment.  But first, here's a taste of his argument.  Where does -- or should -- the buck stop?  At the White House, he contends:

So much winning. Such great deals. We're gonna love his great deals, really we are. Everybody says so. He'll start with healthcare. He guarantees it. Gee, does anybody still believe President Trump's poppycock? There's lots of blame to share for the current collapse of efforts to replace Obamacare. But nobody comes close to deserving as much blame as Trump. Never in the 40 years I've been involved in politics, and never that comes to mind from my extensive study of post-World War II government, have we seen a president so little in charge, so little engaged, and so pathetically ineffective, in an attempt to pass a major piece of domestic legislation that the president supposedly supports. Trump made not a single major speech to the nation to discuss Obamacare replacement. He made no effort to explain to the public why the Republicans' basic approach would make the system better for individuals or for the nation as a whole. He did not try to persuade the public to weigh in with their senators, and didn't make the case for the urgency of reform...

At several points during the herky-jerky House consideration of healthcare reform, Trump did or said things that seriously undermined prospects for passage — not least of which by insisting on an artificially early deadline to get it done. Then, after a House bill passed at least as much despite Trump as because of him, Trump held a ceremony celebrating it as a wonderful piece of work — but one source says he dismissed it repeatedly just a few weeks later as "mean, mean, mean." The last anybody checked, it doesn't help legislators cast a tough vote if the very vote the president of your own party begs you to cast is the one he will criticize three weeks later.

It's hard to argue with some of those criticisms, and nobody should pretend that Trump's leadership has been consistently strong on this issue.  His gratuitous undermining of the House bill -- the passage of which he celebrated in the Rose Garden -- as "mean" sent a terrible signal to wavering Senators: If push came to shove, the president wouldn't necessarily have their backs.  But let's not pretend that the GOP's push to repeal and replace Obamacare started with Donald Trump; it obviously did not.  The party's candidates have been pressing that case to voters for seven years.  Republicans in Congress had lots and lots of time to coalesce around a unified replacement plan, then never did.  Liberals weren't being honest when they claimed the part had "no ideas" on healthcare.  They did.  But the center-right never settled on a consensus proposal that was acceptable to most members.  That was a colossal failure that has reared its head ever since President Trump was sworn into office.  Trump's hands-off approach on policy might be flagged as a weakness by some, but there's another side to that coin: He made clear that he was ready to sign virtually anything that Congress would pass, affording leaders on Capitol Hill maximum space and flexibility in which to operate and maneuver.  That Congressional Republicans were unprepared for this moment, allowing infighting and anxiety to derail the legislative effort is on them, not Trump.  Another Washington Examiner writer, Philip Klein, fortifies this point:

To be sure, it isn't as if Trump has been helpful to the process. His lack of policy understanding, short attention span, lingering unpopularity, conflicting statements, and social media outbursts have hampered the process...it's true that a more engaged and informed president may have helped along the process more than Trump has, but it's also true that at the end of the day, Trump is going to sign anything Republicans can get through Congress and he will boast that it is a major win and the greatest piece of legislation in galactic history. The chaos we're seeing, thus, goes way beyond Trump. Republicans, for decades, have always struggled to have a coherent healthcare policy agenda. For Democrats, it's pretty simple. They believe that comprehensive health insurance coverage is a basic right that should be guaranteed by the federal government...When Republicans are in opposition, it's much easier to thread the needle. They can attack government takeovers of the healthcare system...

Now that it's time to legislate, however, it's become much more difficult to square this circle. You have a group of conservatives who actually want to hold Republicans to what they've been saying all along about "root and branch" repeal of Obamacare that offers a genuine market-based alternative. But then you have a lot of other Republicans experiencing varying degrees of discomfort at scrapping parts of Obamacare that some groups are benefitting from. The problem for Republicans is that they cannot have all things. They cannot simultaneously have a cheaper, less regulated market, with lower taxes and spending, that provides relief to Obamacare's victims — without being willing to accept that a certain amount of disruption will occur to the law's beneficiaries...this is how Republicans ended up where they are now, struggling to cut deals to win votes for a bill that isn't governed by any clear vision, and thus isn't representative of coherent policy.

The GOP's decades of healthcare policy discord and incoherence cant be hung around Trump's neck. The problem long pre-dates him.  The man just (re)joined the party very recently.  And although he hasn't gotten into the weeds on policy, or made a compelling and intelligible case to voters selling the specifics of the various bills that have been put forward, some of his top-level messaging has been spot on: (1) Unlike Obama, I'm a president willing to sign a replacement into law, so this process is no longer symbolic. (2) Obamacare is failing on its own.  If Republicans do nothing, it will collapse.  (3) Democrats ultimately want a disastrous single-payer system, so implementing a more conservative alternative to repair and replace Obamacare is essential. (4) Lawmakers must follow through on their endless pledges, and should do whatever it takes to get it done -- including blowing through August recess.  And on point three, there's new data proving him absolutely correct.  According to Pew, a majority of Democratic voters now want the elimination of private healthcare:

Coming up empty isn't acceptable. Get something done.