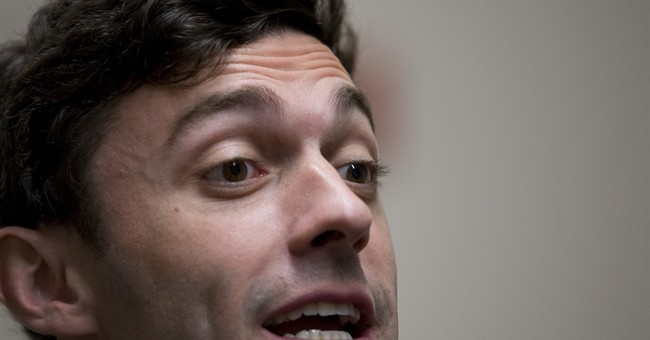 With a one-on-one contest between Democrat Jon Ossoff and Republican Karen Handel all squared away for June 20, more small details continue to drip out about the young liberal hoping to ride anti-Trump intensity among his party's base to a Congressional victory in the traditionally Republican district.  First we learned that Ossoff doesn't even reside in the district he aspires to represent, explaining that he's living with his girlfriend of 12 years while she's in school -- but hey, at least his parents live there. Then we discovered that Ossoff chose not to vote in the 2012 presidential election because he was studying in the UK (where he ended up launching a small company), and evidently couldn't be bothered to obtain an absentee ballot. Now this delightful irony has emerged:

Voting records reveal that the 30-year-old Ossoff, who has been an eligible Georgia voter for over a decade, has never voted in one of the state's many runoff elections, according to information obtained through the Georgia secretary of state. The first opportunities for Ossoff to participate in runoffs came in 2008, the year he initially registered to vote. Ossoff registered to vote nine days too late to participate in the 2008 presidential primary, according to his file, so his first vote came as a registered Democrat in the July 15 Georgia primary. No candidate received over 50 percent of the vote in the primary, sending the race to an August 5 runoff three weeks later. Ossoff did not vote in that runoff. Ossoff returned to the polls that year for the November 4 general election. Incumbent Republican Sen. Saxby Chambliss fell short of 50 percent in the general, sending the race to a December 2 runoff that Ossoff also neglected. Ossoff next showed up to vote in 2010 for a July 20 primary, but was a no-show for the August 10 runoff. He did show up for the November 2 general election.

The Free Beacon's biting summary of the situation: "Georgia Democrat Jon Ossoff cannot vote for himself in June’s runoff election because he lives in the wrong district, but based on his previous turnout for runoff elections it is unlikely he would vote in it even if he could." Tough but fair.  The conservative opposition research group America Rising is also quoting local media reports to hit Ossoff over his wealthy family's tax avoidance maneuvers on their private airplane and "multiple yachts:"

His family has a yacht and a Cessna, the latter purchased through a limited liability company using a relative’s address in New Hampshire, one of a handful of states that don’t charge sales taxes on airplane purchases. In Georgia it would have been a taxable event...One publication shows his family with multiple yachts. If Gov. Nathan Deal signs a bill passed this year, the family could have its boats repaired in Savannah. Ossoff researchers in Washington point to a family that uses multiple LLCs in many states to avoid taxes and shield personal assets

Conservatives shouldn't fault anyone for seeking to lower their tax liability through legal means, nor should they hold someone's family wealth against them.  Ossoff's party routinely pursues both lines of attack for electoral gain, of course, so perhaps the Bernie Sanders-endorsed candidate should have to explain why his rich family takes such pains to avoid paying their "fair share."  After all, inquiring minds would like to know:

How many yachts do billionaires need? How many cars do they need? Give us a break. You can't have it all.


Care to comment, Ossoffs? For the record, the Vermont Socialist owns three homes and appears to employ various methods to reduce the taxes he owes on a six-figure income.  America Rising is using the yacht and airplane tax-ducking revelation to call into question Ossoff's posture as a fiscally-prudent moderate who will "respect" Georgians' tax dollars.  The better rebuttal to that pledge is Ossoff's declared support for Obamacare and unspoken backing of this woman as the leader of the caucus he seeks to join.  I'll leave you with the NRCC's 'getting to know you' video about the Democratic nominee in GA-06, whose campaign has been fueled by millions in overwhelmingly out-of-state contributions from liberals: