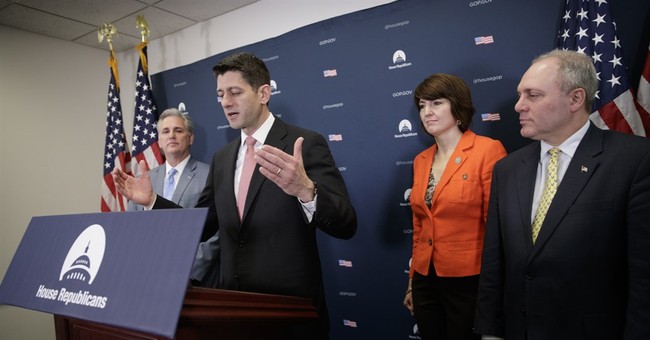 In our Politifact post yesterday (if you're interested in an update, see this resulting Twitter exchange with the left-leaning "fact checker's" executive director), I tacked on this video of House Speaker Paul Ryan telling reporters that Republicans remain committed to repealing and replacing Obamacare, despite last week's high-profile setback.  Ryan said that GOP leaders held a "very, very good meeting with our members" on Tuesday morning in which they all decided to "work together and listen together until we get [the healthcare bill] right."  Watch:


Some skeptical questions might immediately spring to mind: Why wasn't this the approach from the start? How was a consensus not forged prior to moving forward at breakneck speed? And why wasn't the GOP able to "get it right" over seven years of constant opposition?  I'm sure the Speaker's defenders and critics would offer different answers to those challenges, but regardless, I'd much rather hear about steps forward than backward-looking finger-pointing.  Which brings us to an intriguing piece from Bloomberg News published late yesterday, reporting that Republicans are negotiating behind the scenes to revive the 'repeal and replace' effort -- perhaps as soon as next week:

House Republicans are considering making another run next week at passing the health-care bill they abruptly pulled from the floor in an embarrassing setback to their efforts to repeal Obamacare. Two Republican lawmakers say that leaders are discussing holding a vote, even staying into the weekend if necessary, but it’s unclear what changes would be made to the GOP’s health bill. They described the discussions on condition of anonymity. Members of the conservative House Freedom Caucus, who helped derail the bill, have been talking with some Republican moderate holdouts in an effort to identify changes that could bring them on board with the measure...House Speaker Paul Ryan is encouraging members to continue talking to each other about health care to “get to a place of yes” on a plan to repeal and replace Obamacare, according to his spokeswoman AshLee Strong. She didn’t have any updates on the timing on a future vote. House Freedom Caucus Chairman Mark Meadows, a North Carolina Republican, has been negotiating with colleagues on a compromise. “There’s a real commitment among members he’s been speaking with to not give up and move expeditiously toward a path forward,” his spokeswoman, Alyssa Farah, said. “But he doesn’t want to constrain himself to artificial deadlines like ‘before recess.’”


Leadership sources and Freedom Caucus figures seem to agree that some constructive talks are underway, but it doesn't look like there's a strong consensus taking shape, including around the timing of a revamped bill:

What House Republicans agree on: progress is being made.

What they disagree on: what stage they're at, timetable, what will be in the bill

A Republican leadership aide said there are currently no plans to vote on any health-care legislation this week, next week or over a weekend.


As Republicans try to diagnose what went wrong and how to take a stronger run at the issue, they'd be wise to read insightful and productive commentaries from Philip Klein and Avik Roy. The latter piece is policy- and process-focused. The former makes this really important political point:

Here’s the bottom line: Republicans didn’t want to repeal Obamacare that badly. Obamacare was a useful tool for them. For years, they could use it to score short-term messaging victories. People are steamed about high premiums? We’ll message on that today. People are angry about losing insurance coverage? We’ll put out a devastating YouTube video about that. Seniors are angry about the Medicare cuts? Let’s tweet about it. High deductibles are unpopular? We’ll issue an email fact sheet. Or maybe a gif. At no point were they willing to do the hard work of hashing out their intraparty policy differences and developing a coherent health agenda or of challenging the central liberal case for universal coverage...Failing to get the votes on one particular bill is one thing. But failing and then walking away on seven years of promises is a pathetic abdication of duty.


There's a serious trust issue at stake here, and Republican members of all ideological stripes had better pay attention to it. Parting thought: I'm still at a loss to understand how there was such a discrepancy between Sen. Lee's chat with the Senate Parliamentarian and House leaders' understanding of what was, and was not, potentially permissible within the limits of reconciliation. This seems like a really, really key point that absolutely should have been explored as thoroughly as possible before presenting a bill for consideration. Clarity on this front ought to be a pressing priority. Also, in regard to serious policy concerns that I consistently raised about the AHCA, Jim Capretta has some worthwhile thoughts that deserve close attention.