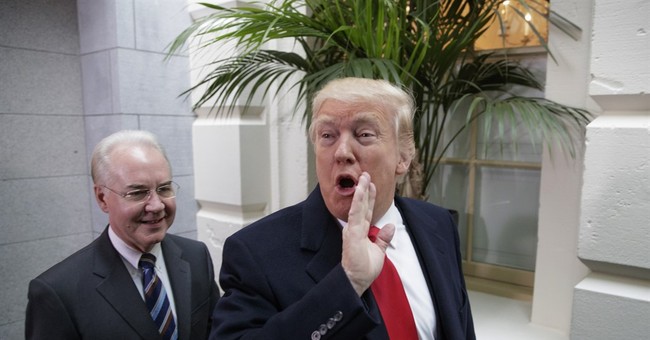 In light of the bill's ugly polling nearly across the board, Republican supporters of the American Health Care Act will take good news where they can get it. Fresh numbers from Politico and Morning Consult that we briefly referenced earlier shows that although public opinion on the legislation has fallen amid negative (and often misleading) headlines stemming from a Congressional Budget Office score, a tight plurality still supports it. Here are the top lines, followed by some analysis:


(1) Politico's polls have been significantly rosier on the AHCA than other national surveys, so it's not entirely unfair to describe it as an outlier -- at least for now. Then again, the last survey in this series had an unusually Republican-leaning sample. This one is D+1. That's still a bit 'redder' than the 2016 electorate was, but it's more in line with the real numbers.

(2) It's no small thing that nearly one-fifth of Republicans are opposed to the bill, and similarly-sized group of are undecided.  Trump and Ryan haven't made the political sale to nearly 40 percent of their own party.  Independents have turned slightly against the bill, while a large majority of Democrats oppose it (although more than a quarter support it).

(3) Voters split basically straight down the middle on approval of Obamacare (strong opposition outstrips strong support), with a majority (52 percent) agreeing that the current law should be partially or fully repealed.  Respondents are conflicted at best about how the replacement law would affect their families, but they're more likely to support it based on projected deficit reduction and premium relief.  Importantly, a new CBO score is expected before tomorrow's floor vote, based on revisions to the bill (the updated legislation is before the House Rules Committee today):

The Congressional Budget Office will release a new estimate on how changes to the GOP Obamacare repeal bill would affect coverage and federal spending Wednesday night, according to Rep. Pete Sessions, chairman of the House Rules Committee. The lack of a score from the CBO prompted Democrats to try to delay a key hearing in the House Rules Committee to advance the American Health Care Act to the House floor. While Sessions said the estimate was expected Wednesday night, House Ways and Means Chairman Kevin Brady, R-Texas, said that he expects the score Wednesday night but said it would be available before the House votes on the bill Thursday...Sessions said that hopefully the CBO would be able to suss out the difference "between the number of people who are not covered versus being kicked off their health plan."

To Sessions' point, something to bear in mind as that updated analysis is published (likely at some point this evening) is that the CBO will likely still heavily overestimate the power of Obamacare's individual mandate tax to compel people to purchase coverage that they can't afford.  Most of the "lost coverage" attributed to the AHCA actually stems from CBO's assumptions about who would obtain coverage under the current law, not who has done so.  Nevertheless, the revamped estimations could impact the nerve-wracking whip count process.  I'll leave you with our dear friend Nancy Pelosi awkwardly starting a half-baked chant at a pro-Obamacare photo-op:


It's ironic to watch lawmakers chant "protect our care," given that the Obama administration unilaterally (and arguably illegally) applied regulatory pressure to help insulate Congress from some of the law's most harmful effects.  And that came after Republicans shamed Democrats into voting to require members of Congress and their staffers be covered by the law they were imposing on the public.  Oh, and here's an interesting little polling nugget out of Wisconsin:

When "Affordable Care Act" phrase was used, favorable views overall were 51%. When "Obamacare" was used, 40% were favorable. #mulawpoll


Unfortunately for Obama, his signature law has become widely known as "Obamacare" (branding matters in politics), and the "Affordable" Care Act is a misnomer anyway, according to...the Obama administration's own data.