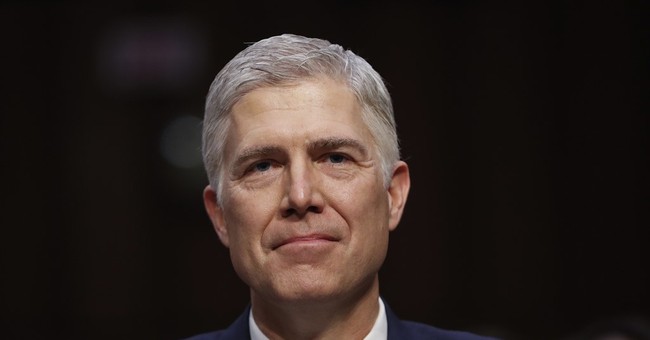 We discussed the reasons why Judge Neil Gorsuch is quite likely to be installed on the Supreme Court following this week's hearings in an earlier post: In short, he's eminently qualified and universally esteemed, Democrats lack the votes to stop him (barring a further escalation of tactics that have already burned them badly, and that can be overcome through retaliatory maneuvers), and opponents have failed to settle on a coherent approach to impede his confirmation. But that doesn't mean that Senate Democrats and left-wing interest groups -- who have worked hand-in-glove in the past -- aren't up to their usual tricks. When they don't have a substantive case to prosecute, there's always the scurrilous character assassination card to play.  New York Magazine is on it, publishing a piece that quickly began making the rounds on Lefty social media.  "Surprise" number one:

Jennifer Sisk, who graduated from the University of Colorado Law School last year, says that during a Legal Ethics and Professionalism class last spring, Gorsuch told his students that companies should ask women about their pregnancy plans during job interviews, and claimed that many women plan to manipulate their employers by taking maternity leave, then quitting to stay home with their children. Sisk sent a two-page letter describing the incident to the Senate Committee on the Judiciary. It was posted on Sunday night by the National Employment Lawyers Association and the National Women’s Law Center...He told them that “all our hands should be raised because ‘many’ women use their companies for maternity benefits and then leave the company after the baby is born.” She says he “implied that women intentionally manipulate companies and plan to disadvantage their companies, starting from the first interview.”

This is remarkably thin gruel on its face, especially since the key charge rests on an inference of something Gorsuch allegedly "implied." But the gruel gets thinner.  Surprise number two, courtesy of Glenn Reynolds:

The quoted “former student,” identified by New York Magazine as one “Jennifer Sisk, who graduated from the University of Colorado Law School last year,” is not just any former student, but a former operative for Democrat Mark Udall. (“Sisk went to college in Massachusetts, at Wellesley, then worked as an aide in Mark Udall’s Senate office in Washington.”) New York Magazine leaves that rather important fact out.

But of course. This concerned former student just happens to have worked as a Democratic operative (on behalf of Colorado's hapless and defeated "Senator Uterus"), which colors her credibility. In fairness, though, just because she's an explicitly partisan actor doesn't necessarily mean that her concerns should be dismissed entirely out of hand. Maybe she has a point. Perhaps an independent assessment from another student who was in the classroom for that discussion could be illuminating.  Surprise number three, via Ed Morrissey:

But in a letter provided to NBC News on Monday by a person helping with the Gorsuch nomination process, another former student wrote to the committee to refute Sisk's claims. "Although Judge Gorsuch did discuss some of the topics mentioned in the letter, he did not do so in the manner described," Will Hauptman wrote in the letter, which was sent on Sunday. Hauptman wrote that Gorsuch often asked his students to consider the challenges they would face as new attorneys, including the tension between building a career and starting a family, especially for women. "The seriousness with which the judge asked us to consider these realities reflected his desire to make us aware of them, not any animus against a career or group," he wrote.

Oh. So there's nothing here, aside from an apparent misinterpretation or distortion peddled by a professional Democrat who nonetheless praised Gorsuch as a "sharp judicial mind," who "believes in facts and legal reasoning," and is "better than the rest of the choices."  Swing and a miss.  Looks like it's back to the warmed-over and unserious "against the little guy" line of attack.  In opening statements yesterday, several Democrats whined about Republicans' application of the Biden Rule and Schumer Standard to President Obama's stymied Supreme Court pick last year, muttered about extremism (they love to abuse that term), and barked about Gorsuch and his allies being outside of the "mainstream."  The trouble with the latter argument is that Gorsuch was confirmed to an influential appeals court by acclamation in 2006, was introduced by two Democrats today, and was unanimously rated as "well qualified" (the highest possible ranking) by the (non-conservative) American Bar Association.  So, uh, the veritable definition of mainstream.  These attacks are unfounded, desperate, and profoundly lame.

It really does feel like Democrats are effectively waving the white flag on Gorsuch, and gearing up for a vicious fight over a future nomination that could shift the ideological composition of the Court to the right.  It's worth recalling that Hillary Clinton explicitly promised to do precisely that, but in the other direction, if she'd been elected.  I've said it before, and I'll repeat it again: The GOP must once again be ready and willing to play hardball when the stakes are so high; the test of their mettle on this front could come sooner than you might think.  I'll leave you with a key portion of Sen. Ted Cruz's opening remarks, as well as an important and correct statement from Sen. Ben Sasse, during Monday's proceedings.  The context of the Sasse callback is pretty obvious:

Ben Sasse: Empathy is not the job of a Supreme Court justice - it is to faithfully and dispassionately rule on the facts