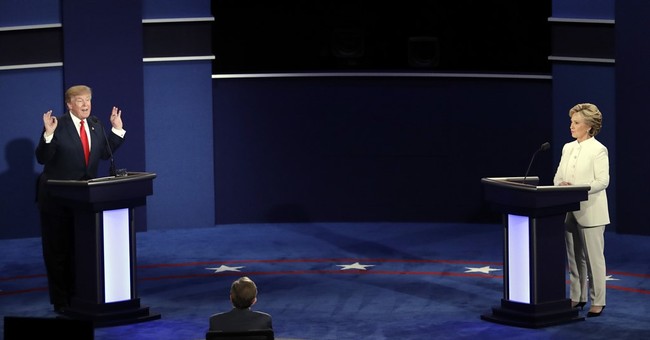 LAS VEGAS, NEVADA -- He needed a game-changing performance. He didn't deliver one. Advantage, Hillary. Some thoughts:

(1) At the risk of being accused of homerism (disclosure: I'm a Fox News contributor), Chris Wallace was superb in his moderating duties last night. He eschewed the temptation to come barging out of the gate with questions about salacious news cycle-driven dramas, opting to save "fitness to be president" themes for much later in the evening. He led with issues. This was a debate that primarily focused on issues. The Fox News Sunday host held each candidate to account for the proposals they've put forward, and the things they've said.  He pressed Trump for specifics. He challenged Clinton with honed evidence. He was tough on both of them, directed the (sometimes wild) rhetorical traffic with laudable poise, and afforded the candidates a fairly wide berth to engage each other, but without allowing the exchanges to spin out of control. A-plus work. And I'd be saying the same thing if he worked for another network.

(2) Hillary Clinton began the night with a breathtaking mischaracterization of the Supreme Court's Heller decision on guns, and whitewashing her extreme stance on abortion as if it were perfectly normal -- as opposed to radically out of step with most voters.  Alas, because Trump was under-prepared to correct and clarify on both issues, most viewers probably thought she "won" that segment.   Nevertheless, the Supreme Court is the top reason for conservatives to oppose her.  On immigration, she complained that her Wikileaks-provided "open borders" speech excerpt was taken out of context. The problem? She's withheld the transcripts of her Wall Street addresses, which makes her dings on Trump's hidden tax returns less impactful.  She much preferred talk about Russian meddling in the election to the content of the leaks -- and Trump probably helped her by refusing to accept Russian guilt as a fact, which our intelligence says it is.  As a result, her slams on him for being a Russian puppet had some bite. Her economic answers were dull, predictable, and full of lefty tropes and poll-tested buzz phrases. She pressed her toughest case against Trump's temperament, drawing some blood throughout that extended back-and-forth, I suspect. Her "horrifying" denunciation of his refusal to pledge to accept the election results (more on that later) was a memorable moment that will get a lot of play, and her rundown of all the times Trump has screamed "rigged!" was powerful. (Trump's interjection about The Apprentice deserving an Emmy was genuinely funny, and she almost laughed).  One assertion she issued at least three times is that she will not add "a penny" to the national debt. This is absolutely, positively ludicrous and false. GOP ad-makers should already be saving those clips for 2020, assuming she wins.  That pledge will be broken on day one.

(3) Trump was subdued and controlled at the beginning, hitting his talking points on guns and abortion, but allowing her to control both topics. He rebounded in the immigration segment, his comfort zone. The press room groaned and gasped at the "bad hombres" line, but he was obviously talking about illegal immigrants who've committed violent felonies on our soil.  I think he won that skirmish.  In general, Trump counter-punched throughout the evening, with mixed results. One of his better moments was challenging Hillary to return Clinton Foundation cash donated by misogynistic and homophobic regimes. He pointedly asked whether she'd do so, then rambled on too long, distracting himself with another point. She never answered. He let her off the hook. Trump's blanket denials of all the sexual misconduct allegations against him were not credible, and his mentions of the Project Veritas videos (as we predicted) were insufficiently explanatory. At the very least, he may have driven Google traffic to that investigation from curious debate viewers. Though she was much more fluid and informed on foreign policy than he was, Trump got some good jabs in about her record. His effective message: How do you expect this person to fix the mess we face when she's been at or near the center of US power for decades, and she's contributed to the mess?  Her failures and unlikeability kept him in the game.

(4) Despite again communicating in his patented sentence-fragment-sprinkled word salad, I think he probably battled Clinton to an approximate draw for most of the debate. The big exception was the "fitness for office" stretch. She clearly won that exchange, and his decision to repeatedly equivocate on accepting the electoral outcome in November (the "leave you in suspense" line felt flat and felt cheap) will dominate a lot of the coverage for the next few days. Trump surrogates will respond with the parable of Al Gore, who dragged the 2000 election out for weeks on end, arguing in court for partial, cherry-picked recounts of counties that he thought could tip Florida's overall tally into his column. (He lost, no matter how you slice it). But Clinton defenders will say that Gore didn't call the legitimacy of the process into question prior to the voting ending, and only pursued a recount under very unusual circumstances. There's a difference between not conceding an historically close election, and baselessly alleging widespread fraud in advance. Both sides will have their talking points on this, but I'd guess the American people want to hear their candidates promise to honor the process. Even Trump loyalists like Laura Ingraham quickly conceded this point. And if CBS News' Luntz focus group -- which split almost right down the middle for Trump and Clinton overall -- is any indication, Trump's "rigged" flirtations on stage hurt him:

Voters want the candidates to support the election results. No excuses.

Hillary did. Trump did not. #Debate pic.twitter.com/LH7J4JPMC2

(5) One policy point that's stuck in my craw: The final question of the night was about entitlement reform. Chris Wallace laid out the mathematical reality very succinctly. Donald Trump pretended the problem will be solved with magical economic growth. Hillary Clinton talked about taxing the rich and expanding entitlements. Neither of these people is remotely serious about the wave of debt (fueled historically during the Obama era) that is building, and that non-partisan bookkeepers keep warning will swamp us. Very disheartening. I'll leave you with this...interesting tweet from Trump's campaign manager, who (along with Mike Pence and Reince Priebus) insisted in the spin room that yes, Trump will abide by next month's outcome:

Finally, for what it's worth, the first two scientific-isa snap polls from CNN and YouGov both gave Hillary the edge last night, but by relatively close margins compared to the previous two debates.
NYC Vaccine Mandate for Teachers Delayed by Federal Judge Just Days Before Set to Go into Effect
Rebecca Downs
House Budget Committee Passes Spending Bill
Rebecca Downs
NBA Player Denied Religious Exemption from San Francisco's Vaccine Mandate, Will Not Play Home Games
Landon Mion
What Does It Mean That So Many Americans Support Roe v. Wade?