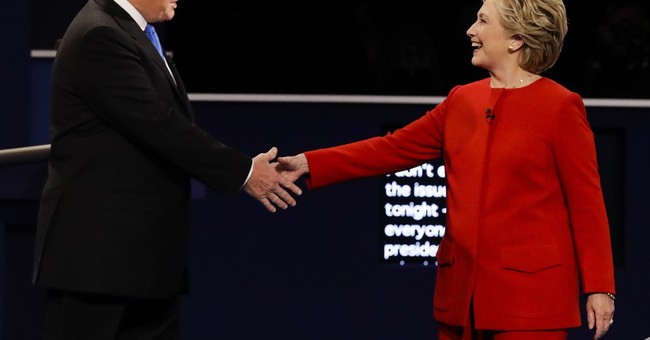 A record-setting performance was widely expected, with the biggest question mark being whether or not the final number would top 100 million -- which would approach Super Bowl territory. In the end, last night's presidential square-off drew a record audience, but fell shy of gaudy nine-figures predictions. History at Hofstra:

Monday night was the most-watched debate in American history: https://t.co/E3Fkwp4Wyk ????

More than 80 million people tuned in to see Hillary Clinton and Donald Trump face off, setting a new record in the sixty year history of televised presidential debates. The final numbers are still being tallied by Nielsen. But the debate averaged a total of 80.9 million viewers across 12 of the channels that carried it live. Nielsen traditionally measures viewers who watch via traditional TV at home. That means people who watched the debate at parties, bars, restaurants, and offices were not counted. Nor does the 80.9 million viewer total include PBS and C-SPAN. Ratings for PBS will be available later Tuesday. Many millions also watched the debate via the Internet. Various live streams on YouTube together registered more than 2.5 million simultaneous viewers. Live streams on other sites also reached millions of people. This means the actual total audience is significantly higher than 80 million.

With online viewing, PBS, CSPAN and watch parties factored in, I wouldn't be surprised if the actual total ended up north of 90 million. A monster number. No matter what happens in November, Donald Trump can forever boast of delivering yuge television ratings in both the GOP primary and the general election, having set records at both stages of the electoral cycle. And let's face it, last night's tune-in factor wasn't amped up because of overwhelming public curiosity about...Hillary Clinton.  But in the context of winning the election, does last night's massive audience help the GOP nominee?  If early snap polls are to believed, substantial majorities of viewers thought Hillary Clinton bested him over the 90 minute confrontation, suggesting that she probably did herself some good.  The potential silver lining for Trump is that it's very likely that the most eyeballs, paying the most attention, were focused on the early stages of the debate, during which he was most effective at driving home his message, before he started to come unglued.  So while the most people were watching, and were most focused on content, Trump held his ground.  But that's the best spin available to Team Trump.  As I've cautioned twice already today, we won't have a more accurate picture of last night's fallout until late this week or early next week.  I'll leave you with a small personal note.  On Bret Baier's panel the other night, we were asked to predict whether the ratings would come in above or below 100 million.  In the moment, I went with the group consensus, taking the "over."  But then I thought about it and revised my prediction:

.@BretBaier asked over/under on 100 mil viewers for the debate. Whole panel said over, but I should've gone under, 'Price is Right' style.

In light of the result, my move looks tremendous.  The reasoning behind it that even though the stats were undoubtedly going to top those from 2012's (historically high) first debate, getting from an average of 67 million all the way up to 100 million is a big gap to close. And so it was. Also, considering that four major networks plus the cable networks, plus CSPAN and many millions of internet viewers added up to, say, 90 million people, that makes the previous record-holding debate all the more impressive. The Reagan/Carter 1980 debate drew 81 million viewers with far fewer outlets, and a smaller population. But it was the lone debate of that cycle, which cuts in the opposite direction. Parting thought: Ratings are going to decline for the October 9 "town hall"-style debate, right?