Clinton U: Here's the Other Multimillion-Dollar Fraud Scandal the Media Isn't Telling You About 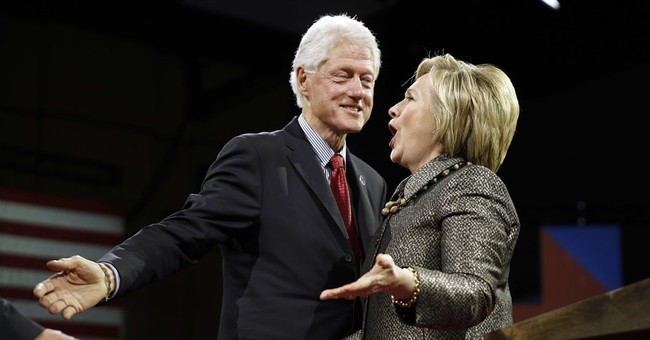 Donald Trump's indefensible and explicit race-baiting of a federal judge presiding over the Trump University case was a lose-lose for him: He was almost universally criticized -- with rare, hedged defenses ranging from lame to lamer -- and as a consequence of the week-long firestorm, he kept the unflattering and unhelpful fraud case in the national spotlight. Only after an internal campaign power struggle and a pleading call from RNC Chairman Reince Priebus did Trump finally reportedly relent, issuing a factually-challenged public statement that stated he would cease discussing the controversy. Within hours, he was...discussing the controversy. In any case, buried in Politico's story about the Trump camp's machinations and strife is this nugget about the advice senior aide Paul Manafort was offering to his candidate:

For several days, Manafort and his allies had urged Trump to stop attacking Curiel and to respond to questions about the Trump University lawsuit by going on offense, highlighting Bill Clinton’s ties to the for-profit Laureate Education and the grants the company received from Hillary Clinton’s State Department and the U.S. Agency for International Development.

The average voter could easily be excused for asking, "wait, what's this Laureate Education thing?" Due to the incessant and arguably fully deserved media scrutiny of Trump University, which Trump himself foolishly fueled by hammering Judge Curiel in such a ham-fisted and reprehensible manner, very scant attention has been paid to the other side of this coin. Left-leaning law professor Jonathan Turley mines the details of the Clintons' lucrative 'Laureate Education' scheme, and they're pretty darned sketchy:

The national media has been accused of again sidestepping a scandal involving the Clintons that involves the same type of fraud allegations. The scandal involves the dubious Laureate Education for-profit college and entails many of the common elements with other Clinton scandals: huge sums given to the Clintons and questions of conflicts with Hillary Clinton during her time as Secretary of State...Laureate Education has been sued over such programs as its Walden University Online offering, which many have alleged is a scam designed to bilk students of tens of thousands of dollars for degrees. Students says that they were repeatedly delayed and given added costs as they tried to secure degrees, leaving them deeply in debt.

And here are the details on the Clinton angle, which naturally involves millions of dollars and a serious appearance of possible impropriety:

The respected Inside Higher Education reported that Laureate Education paid Bill Clinton an obscene $16.5 million between 2010 and 2014 to serve as an honorary chancellor for Laureate International Universities. While Bill Clinton worked as the group’s pitchman, the State Department funneled $55 million to Laureate when Hillary Clinton was secretary of state (see update). That would seem a pretty major story but virtually no mainstream media outlet has reported it while running hundreds of stories on the Trump University scandal. There was even a class action — like the Trump University scandal. Travis et al v. Walden University LLC, was filed in U.S. District Court in the District of Maryland but dismissed in 2015. It is not clear why it was dismissed. However, the size of the contract to Clinton, the payment from State and the widespread complaints over alleged fraud should warrant a modicum of attention to the controversy. The controversy has many of the familiar complaints over fraudulent online programs that take advantage of hard working people.

[UPDATE: Turley has adjusted his post with some clarifications about the nature of grants to Laureate-related affiliates and entities, noting that there's no direct evidence of a quid pro quo, and quoting the president of Walden University's defense of his school].  Ed Morrissey notes that Bloomberg has reported on this story, following up on Peter Schweizer's Clinton Cash. Defenders of the Clintons will point out that the class action suit against the entity that funneled millions to Bill Clinton to be its front man was dismissed, and that government grants to Laureate and its affiliates started under the Bush administration. In other words, but Bush! Here's the problem with that argument, via the 2015 Bloomberg report: "A Bloomberg examination of IYF’s public filings show that in 2009, the year before Bill Clinton joined Laureate, the nonprofit received 11 grants worth $9 million from the State Department or the affiliated USAID. In 2010, the group received 14 grants worth $15.1 million. In 2011, 13 grants added up to $14.6 million. The following year, those numbers jumped: IYF received 21 grants worth $25.5 million, including a direct grant from the State Department."   Taxpayer funded grants "exploded" after Clinton became "chancellor" of this questionable institution, including a large chunk of change ($55 million in total) courtesy of...Hillary Clinton's State Department.  Extraordinary.

Much of the media is going to have to be forced into covering this story.  You know who could have helped make that happen a lot sooner?  Donald J. Trump and his giant megaphone.  Imagine if he'd spent his time basically saying, "I'm not going to comment on an upcoming trial, but I'm confident we'll win.  But if you're so curious about alleged fraud at a university, why aren't you talking at all about Bill and Hillary Clinton and the Laureate Education scandal?  That actually involved lots of money from taxpayers."  Rather than stupidly and wrongly battering the Trump U judge while alienating many within his own adoptive party, he could have deflected and counterpunched, making Laureate Education more of a household name with each ensuing media appearance.  Every Republican should be urging Trump to make this course correction; he can drag the media into pressuring the Clintons on their own multimillion-dollar sweetheart deal involving a troubled online education entity.  What was Mrs. Clinton just saying about the influence of "power brokers" and money in politics, again?