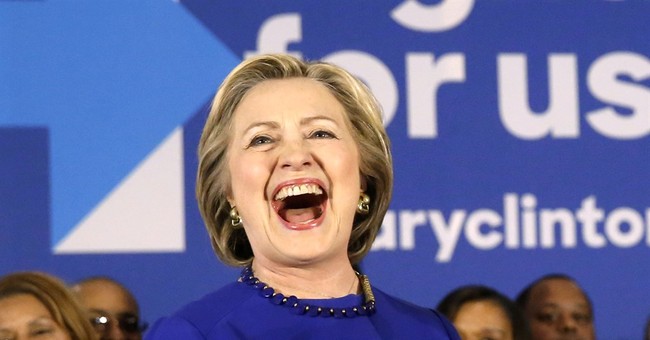 A few numbers to munch on ahead of tomorrow's Republican elections in Arizona and Utah (and American Samoa), starting with the good news for Trump fans: The celebrity billionaire is leading in the first contest mentioned, having won the endorsements of former Governor Jan Brewer and lightning rod Sheriff Joe Arpaio. The RCP average, based on two March surveys, shows Trump ahead by double digits -- and still virtually tied for the lead even if Ted Cruz and John Kasich somehow consolidated their support (which is unlikely to occur, for reasons explained in this worthwhile Josh Kraushaar column).  Trump appears firmly on track to capture the state's 58 winner-take-all delegates.  Another piece of positive data for Team Trump: Ted Cruz's theory that a one-on-one race gives him a clear shot at defeating Trump all across the country is...complicated by a fresh poll out of New York:


Hillary crushes Trump head-to-head in this same poll, which also pours ice water on the idea that Kasich might run stronger against Trump in bluer states. He's pulling a robust one percent, although a survey taken earlier in the month shows Kasich running second in the Empire State.  The silver lining for the fractured #NeverTrump alliance is that New York's 92 bound delegates are assigned proportionally, with a 20 percent threshold.  Cruz or Kasich could siphon delegates away from Trump in his home state, but probably not if they split the anti-Trump vote.  And what do the New York stats say about Trump opponents' viability in other Northeastern states yet to vote?  Regardless, all of that's not until late April.  A more immediate challenge is Utah's caucuses, in which Trump is likely to finish a very distant third.  Here's how the candidate has attempted to engage the conservative state's GOP electorate in recent days:

Going to Salt Lake City, Utah, for a big rally. Lyin' Ted Cruz should not be allowed to win there - Mormons don't like LIARS! I beat Hillary

In which Trump questions Romney’s religion, in Salt Lake City: “Are we sure he's a Mormon? Are we sure?"


And how's that working out?  Oops:


That would mean Romney-backed Cruz would sweep Utah's 40 delegates, which become winner-take-all if any candidate breaks the 50 percent mark.  The only chance Trump has of picking up delegates there is if John Kasich bleeds enough anti-Trump votes away from Cruz to open the door.  Kasich, in case you're curious, is campaigning in the state, where he recently picked up the sitting governor's support.  As for Trump's "I beat Hillary" claim in the tweet above, we've already dealt with that issue rather extensively.  In short, he does not beat Hillary.  Maybe he meant in Utah -- one of the reddest states in America, in which Barack Obama was held to 34 and 25 percent of the statewide vote in 2008 and 2012, respectively?  Over to you, Utah:

Among non-Trump supporters in the Utah poll, just 29% would vote for Trump in the general election. #NeverTrump pic.twitter.com/4IUxgR9JtV


If Donald Trump becomes the Republican Party's nominee, Utahns would vote for a Democrat for president in November for the first time in more than 50 years, according to a new Deseret News/KSL poll. "I believe Donald Trump could lose Utah. If you lose Utah as a Republican, there is no hope," said former Utah Gov. Mike Leavitt, a top campaign adviser to the GOP's 2012 nominee, Mitt Romney. The poll found that may well be true. Utah voters said they would reject Trump, the GOP frontrunner, whether former Secretary of State Hillary Clinton or Vermont Sen. Bernie Sanders is the Democratic candidate on the general election ballot. While Clinton was only slightly ahead of Trump — 38 percent to 36 percent — Sanders, a self-declared Democratic socialist, holds a substantial lead — 48 percent to 37 percent over the billionaire businessman and reality TV star among likely Utah voters.


An outlier, Trump defenders may cry.  Problem: The results I've shared come from two separate polls, both released over the weekend. I suspect that if Trump captures the nomination, enough Republicans would get behind him to foreclose a loss to Hillary Clinton in Utah, for crying out loud. But the fact that it's even remotely in play for Democrats illustrates Trump's general election poison.  I'll leave you with Trump praising his campaign manager's "spirit" for grabbing a protester by the collar before denying that it happened. Which it did. On tape: