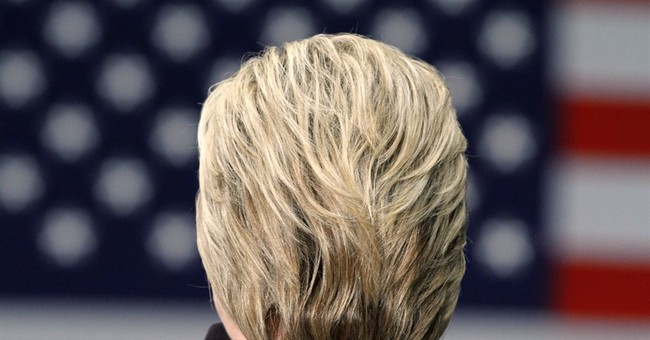 USA Today and Suffolk University are out with a fresh national poll of American voters. Here's what it finds:

(2) In the GOP primary, Donald Trump leads the pack with 35 percent support, followed by Cruz (20 percent) and Rubio (17 percent).  No other candidate breaks into double-digits, with a frustrated-sounding Jeb Bush sitting below six percent support.  Asked about second-place preferences, Rubio is tops at 23 percent, followed by Cruz at 19 percent.  Trump comes in last on this measure, in single-digits.  On the Democratic side, Hillary Clinton's advantage over Bernie Sanders is down to ten points, as a separate survey shows things getting dicey for her in Nevada:

(3)  President Obama's job approval rating is underwater by double digits at (40/51).  The mood of the country remains sour, with 63 percent of voters saying America is "on the wrong track."

54% of voters say they'd be "scared" or "dissatisfied" if Hillary is her party's nominee.


UPDATE - Oh my.  Is this an outlier, or a sign of things to come?  A just-breaking NBC/WSJ poll shows Ted Cruz overtaking Trump nationally (28 to 26, with Rubio at 17).  Check out these head-to-head numbers showing how the race may shake out if the Republican nominating contest is distilled down to two political combatants.  It seems as though Trump opponents should be rooting hard for a significantly winnowed field, as soon as possible:


Rubio and Cruz are both +16 on Trump, while Trump leads Bush and Kasich.  By the way, the same poll shows Americans evenly split (43/42) on the question of whether the US Senate should even consider a Supreme Court nominee from this lame duck president.  I've argued that regardless of how they get there, Republicans must ensure that Obama is not allowed to choose Scalia's replacement.