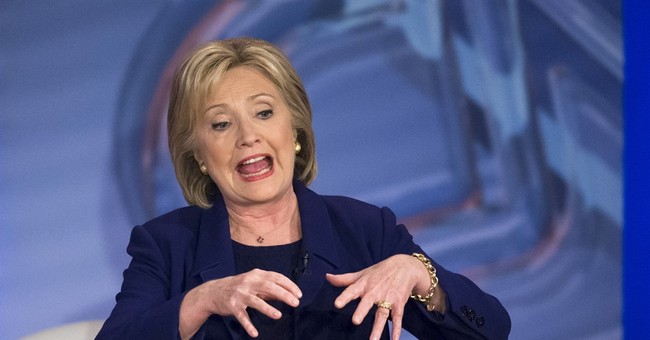 In my piece this morning examining the floundering and mildly desperate state of Hillary Clinton's presidential campaign, I asked this question: "We know she was reckless in her handling of national security secrets, but she's assiduously protective of whatever she said in those speeches. Why?" The assumption is that rather than corroborating her implausibly revisionist characterizations of what she said to those elite bankers who paid her six-figures per speech (her typical fee), the hidden transcripts would reveal a very chummy posture toward her supposed mortal enemies, or whatever. Such a revelation would further undermine her credibility among the Democratic base's rabidly anti-Wall Street base, buttress one of Bernie Sanders' central lines of attack, and again expose her as self-serving and genetically incapable of ruthful candor. Which brings us to this Politico story. Drip:

When Hillary Clinton spoke to Goldman Sachs executives and technology titans at a summit in Arizona in October of 2013, she spoke glowingly of the work the bank was doing raising capital and helping create jobs, according to people who saw her remarks. Clinton, who received $225,000 for her appearance, praised the diversity of Goldman’s workforce and the prominent roles played by women at the blue-chip investment bank and the tech firms present at the event. She spent no time criticizing Goldman or Wall Street more broadly for its role in the 2008 financial crisis. “It was pretty glowing about us,” one person who watched the event said. “It’s so far from what she sounds like as a candidate now. It was like a rah-rah speech. She sounded more like a Goldman Sachs managing director.” ... Clinton spokesman Brian Fallon dismissed the recollections as “pure trolling,” while the Clinton campaign declined to comment further on calls that she release the transcripts of the three paid speeches she gave to Goldman Sachs, for which she earned a total of $675,000.


Why not produce the transcripts to prove that this is "pure trolling"?  No comment.  Got it.  Vanity Fair  notices an intriguing quote from one of Politico's sources:

If the transcript came out, “it would bury her against Sanders,” the source added later. “It really makes her look like an ally of the firm.” The drip-drip of quotes characterizing Clinton’s comments will only increase the pressure on the candidate to redefine her strategy against Sanders, who is running away with the lion’s share of young voters, particularly women, who overwhelmingly favor the Vermont senator’s populist campaign. Clinton retains her dominant position in the primary states after New Hampshire. But her seeming inability to hold off the brutal attacks on her cozy relationship with Wall Street speaks to a startling lack of foresight.


That last bit is key.  Bernie Sanders isn't going to "bury" Hillary Clinton, nor is anything in those transcripts. The party establishment simply won't allow it, as the recent torrent of "sexism" bullying demonstrates.  They're just getting started against him; plus, the race will soon shift to more favorable Clinton terrain.  But Hillary and her team will have to get their hands dirty in destroying Sanders, which isn't likely to go over well with his hordes of young fans, whose antipathy toward her already poses a potential general election problem.  More worrisome for Democrats, though, is Hillary's stunning unpreparedness to handle questions about her high-dollar speeches to financial firms. For all the attention paid to Marco Rubio's repetition of a canned (but correct) line at the latest debate, that was a tactical misstep.  Clinton's responses on this issue belie a shocking strategic blind spot, both before and after delivering those lucrative addresses.  She's been awkward and unconvincing overall, and on the question of releasing the contents of her remarks, she's careened from unresponsive cackling, to signaling an openness to doing so, to demanding that other candidates do the same first.  Stated bluntly, Hillary Clinton is not a very good or appealing political candidate.  She is off-puttingly calculating, painfully inauthentic, and often flatly dishonest.  Questions of influence peddling aren't going anywhere.  The FBI's criminal investigation is real.  Her unfavorability rating is high.  Her trustworthiness numbers are low.  Her relatability is weak.  And yet, she'll be Democrats' nominee, because they have no other choice.  Hence the appearance of some hilariously accurate swag at a recent Clinton rally.  Oof: