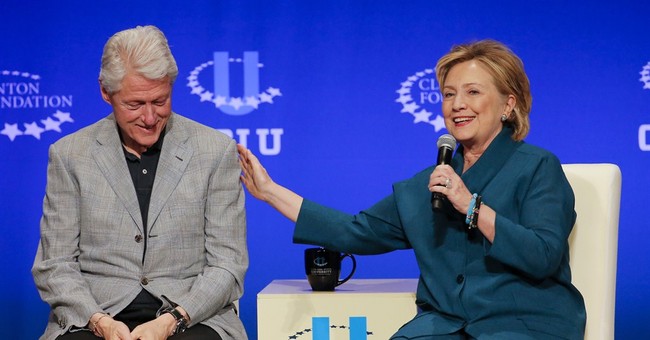 Once again, mistakes -- passive voice -- were made:


The foundation has also come under scrutiny for failing to clear all foreign government donations through an agreed-upon State Department vetting process when Hillary Clinton was secretary of state, and for failing to identify foreign government donations on tax returns. Fact-checkers this week challenged the foundation’s claims that it’s barred by Canadian privacy laws from revealing the names of more than 1,000 mostly foreign donors to a joint Clinton-Giustra nonprofit registered in Vancouver, British Columbia. It acknowledged in response to POLITICO’s questions that it mischaracterized as foundation donations money from the China Overseas Real Estate Development and the U.S.-Islamic World Conference. That money was actually honoraria paid for Bill Clinton speeches by those entities, said foundation officials, who added this week those were the only mistakes “we are aware of.”


Well, aside from all the undisclosed foreign donations (followed by empirically bogus excuses), and, you know, the tens of millions in foreign government payments that weren't reported in tax filings over at least five years. CBS News reported on several elements of Clinton's anti-transparency machinations last evening:


Not a bad report overall, although it did uncritically parrot the Clintons' debunked defense that 1,100 donors were left undisclosed due to unavoidable Canadian law requirements. Not true. Anyway, here's Hillary repeatedly promising disclosure and transparency during her confirmation hearings (via the Free Beacon):


"All contributors will be disclosed." Didn't happen, according to Bloomberg, the New York Times and the Boston Globe. "An extremely low percentage of [Clinton Foundation donations go] to overhead." False. "Foreign government pledges will be submitted to the State Department for review." Strike three.  And then there's this:

Hillary to Senate in '09 re: transparency agreement with White House - I got this http://t.co/lhpTLPmUp5 pic.twitter.com/bBdvlbbkP3


Can't pass that buck, Your Majesty. You "guaranteed" you'd be hands-on in ensuring your transparency vows were fully implemented. They weren't.  It's time to hand over your entire secret email cache to an independent third party for review.