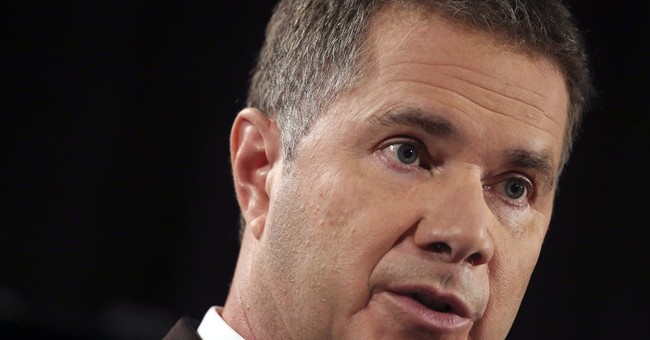 Trailing Joni Ernst in the polls, Democrat Bruce Braley claims to be a supporter of "equal pay for women," a staple of Democrats' midterm messaging strategy. But a new ad from a group called the Iowa Priorities Fund showcases Braley's hypocrisy on the subject:


Fifty-nine cents on the dollar, Bruce? His campaign might respond that those calculations unfairly overstate the Braley pay gap.  Women receive equal pay for equal work, they'd likely argue, so the discrepancy highlighted in the ad isn't a product of discrimination at all.  It's ridiculous to draw unequal pay conclusions based on unequal work, they'd say.  And they'd be right.  Pay disparities between men and women are overwhelmingly rooted in causes other than gender discrimination.  They arise from other factors such as the choices that women make (to become mothers, for example), education, hours worked, and the types of jobs than men and women tend to take.  But that degree of nuance is utterly and intentionally absent when Democrats, especially at the White House, obsess over this phony issue for political gain.  The Left's ploy on equal pay is to repeat damning-sounding statistics (like, for example, "women in Bruce Braley's Congressional office make 40 percent less than men") without any context.  The idea is to rile up a segment of the populace against this injustice, which many people falsely ascribe to discriminatory practices, then lambaste Republicans as hostile to women's interests for attempting to explain the facts. It's a classic drive-by attack that targets lower-information voters.

The ad above uses Democrats' own slithery standards against them.  If you're going to play these games, you'd better be prepared to defend your own record on this issue -- based on the rules you've chosen to erect for this debate.  It's worth noting that Braley pay gap is especially pronounced, suggesting that his upper echelon of advisers and staffers (who make the most money, thus skewing the stats) is dominated by men.  We mentioned on Monday that this is also becoming an issue out in Colorado, where supposed "pay equity" advocate Mark Udall pays women on his Senate staff 84 cents on the dollar, using Democrats' misleading math.  But even using that questionable method, Udall's Republican opponent Cory Gardner pays women on his staff more than men:


"Coffman," incidentally, refers to a Republican Congressman who represents a suburban Denver district.  Gardner employs more women than Udall, and has them placed in more powerful positions, so they earn more.  I'm still holding out hope that Team Gardner will exploit this advantageous set of facts to puncture the non-stop 'war on women' meme "Mark Uterus" keeps flogging.  I'll leave you with two videos out of Iowa.  The first features a local news report on double-digit premium hikes hitting consumers in the Hawkeye State -- presenting another headache for Braley, who claims to have read all of Obamacare before enthusiastically voting for it.  The second is Joni Ernst's latest upbeat spot: