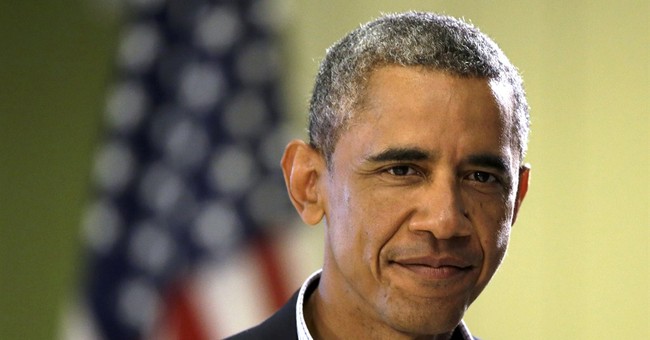 Sort of, but some details remain murky.  Via Jim Geragthy, the New York Times reports today that the Obama administration is seeking to commit the United States to an anti-climate change international treaty without even attempting to seek formal approval from the Senate.  According to the explicit verbiage of the Constitution, two-thirds of the upper chamber must assent to such an agreement in order for it to take on the binding effect of law. Given that Harry Reid couldn't lasso the votes to advance cap-and-trade when his caucus enjoyed a huge majority in 2009 and 2010, accumulating 67 votes in the current Senate environment for an initiative like this is unlikely in the extreme.  From the Times' story:


The Obama administration is working to forge a sweeping international climate change agreement to compel nations to cut their planet-warming fossil fuel emissions, but without ratification from Congress. In preparation for this agreement, to be signed at a United Nations summit meeting in 2015 in Paris, the negotiators are meeting with diplomats from other countries to broker a deal to commit some of the world’s largest economies to enact laws to reduce their carbon pollution. But under the Constitution, a president may enter into a legally binding treaty only if it is approved by a two-thirds majority of the Senate. To sidestep that requirement, President Obama’s climate negotiators are devising what they call a “politically binding” deal that would “name and shame” countries into cutting their emissions. The deal is likely to face strong objections from Republicans on Capitol Hill and from poor countries around the world, but negotiators say it may be the only realistic path.

What the administration is pursuing, then, is a "hybrid agreement," according to the Times. The proposal would "blend legally binding conditions from an existing 1992 treaty with new voluntary pledges. The mix would create a deal that would update the treaty, and thus, negotiators say, not require a new vote of ratification."  Here's what the plan would look like:


Countries would be legally required to enact domestic climate change policies — but would voluntarily pledge to specific levels of emissions cuts and to channel money to poor countries to help them adapt to climate change. Countries might then be legally obligated to report their progress toward meeting those pledges at meetings held to identify those nations that did not meet their cuts. “There’s some legal and political magic to this,” said Jake Schmidt, an expert in global climate negotiations with the Natural Resources Defense Council, an advocacy group. “They’re trying to move this as far as possible without having to reach the 67-vote threshold” in the Senate.


Magic, swoons the guy from the left-wing environmental group whose homepage features a video from actor Robert Redford lashing out at "big oil."  I'd call it confusing, at best.  The US would be "legally required" (how?) to "enact" (does that require Congress, or are they just for show?) some form of "domestic climate change policies."  What would satisfy that so-called requirement?  Any bill at all?  It's unclear.  But then the emissions targets themselves would be entirely voluntary, even as signatory nations would be "obligated to report their progress" towards those voluntary, non-binding pledges.  Some of those details are to be hammered out at a drafting session in Peru before Christmas.  The Times piece makes only passing reference to the fact that any treaty would be useless without countries like China and India signing on (and abiding by their voluntary goals), which is hardly a minor detail.  The story also notes that the Senate "refused to ratify" the Kyoto protocols treaty in 1997, framing the issue as one of Republican obstruction.  For the record, the Senate voted 97-0 against even considering Kyoto ratification.   The article describes GOP opposition as a combination of nihilism, mindless skepticism of the "established science of human-caused global warming," and provincial self interest.  Sen. Mitch McConnell, for instance, represents a state with major interests in coal, "the world’s largest source of carbon pollution," the Times informs its readers.  And the award for the most alarmist sentence in the story goes to...


"The strategy comes as scientists warn that the earth is already experiencing the first signs of human-caused global warming — more severe drought and stronger wildfires, rising sea levels and more devastating storms — and the United Nations heads toward what many say is the body’s last chance to avert more catastrophic results in the coming century."

Last chance before catastrophe.  As I've written previously, I believe that anthropogenic climate change is real -- but the evidence also strongly indicates that unilaterally shackling America to the Left's preferred policy "solutions" would be economically harmful, if not ruinous, and wouldn't even dent the problem they're supposedly trying to address.  Unless and until other massive emitters get on board, this debate is entirely academic. All pain, no gain.  I'm also skeptical of the politicized "scientific community's" shrill alarmism.  The Economist noted last year that many of climate science's dire projections have not been confirmed by actual data, and that global warming has mysteriously paused for more than a decade in spite of soaring carbon emissions. And it didn't help matters when the devastating East Anglia scandal broke in 2009, revealing that supposed impartial empiricists were hiding and fudging data to fit their preferred narrative. Eminent scientists were shown to be petty, ideological tyrants, subordinating real data and the principle of scientific transparency to their political and personal agendas.  It's difficult to take dire warnings from these people seriously at this point.  They're terribly compromised.  Finally, regardless of the merits of climate change, the Constitution says what it says.  No president can simply assert a quasi-legally-binding international treaty into existence. Allahpundit thinks Obama may be trying to goad Republicans into another shutdown or impeachment talk, either of which would be politically exploitable.  That may be part of it, but it seems to me that Obama has basically given up on doing his job within, let's call them, traditional confines.  He's an unpopular lame duck -- who will get lamer after November -- but he remains highly ideological, so he's going to invent pretexts to try to impose his will as best he can.  Whether it works, or holds up in court down the road, is of minimal concern.  "Fundamentally transform" as much as possible, and see what sticks.
Supreme Court Marshal Calls on Officials to Enforce Laws Banning Protests Outside Justices’ Homes
Sarah Arnold
New Yorkers Will Have to Provide Social Media Accounts in Order to Buy a Gun
Sarah Arnold
A Potential 2024 Trump Announcement Could Come This Month
Sarah Arnold