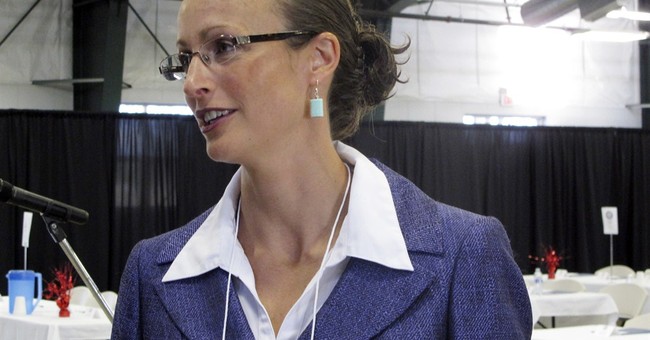 Believe it or not, this clip is probably the least of Montana Democrats' problems with their newly-minted Senate candidate.  But let's watch it anyway.  Her train of thought chugs to a cringe-worthy standstill midway through her rehearsed answer, leading to an awkward silence. After several seconds, the reporter takes pity on his interview subject and gamely bails her out with a lay-up question (via the Free Beacon):

Curtis: "It’s my honor to travel around the state now for the next nine weeks and continue talking and listening to Montanans about the issues that are important to them. And…"

Interviewer: Where are you from?


There are a lot of things Ms. Curtis doesn't seem to know, such as her positions on major issues.  From a CNN profile:  "When asked her position on the situation in Iraq, Curtis told CNN, 'Give me a little more time.' On the border crisis, 'I'll need more time, you know only 11 days ago I was painting my storm windows.'"  What she does know is that she's against "the one percent" and hates Paul Ryan's budget.  Democrats' chances of holding this seat sustained a major blow when placeholder Senator John Walsh dropped out of the race, following damning plagiarism revelations.  Walsh had been hand-selected to replace longtime incumbent Sen. Max Baucus, who was flagging badly in polls, and who was tossed a lifeline by the White House when he was selected as US Ambassador to China.  Scrambling to field someone in the race, the party settled on Curtis, whose political views (the ones that she doesn't need 'a little more time' to determine) don't inspire confidence. Phil Kerpen does some digging:


Montana Democrats nominated in his stead State Rep. Amanda Curtis, a member of the radical, revolutionary socialist group Industrial Workers of the World (IWW). Rep. Curtis was nominated for the United Stated Senate by the Montana Democratic Party on August 16, 2014. Less than two weeks earlier, on August 4, she tagged herself in [a] photograph featuring IWW banners and identifying Curtis as an FW, or “Fellow Worker,” the term used in IWW for group members...On August 7, 2014, Rep. Curtis changed her Facebook profile photograph to a picture of former Communist Party USA chair Elizabeth Gurley Flynn, who received a state funeral from the Soviet Union in 1964...One post of Mr. Curtis’s that Rep. Curtis shared on July 31 suggests that, in the event she and her allies cannot accomplish their objectives through electoral victories, they will resort to “sterner means.”


Also known as "violence."  Curtis' group advocates the abolition of "wage slavery" and "eventually end[ing] the capitalist system."  Montana's unions have eagerly endorsed her, natch.  When asked about these radical Socialist viewpoints, a campaign aide told CNN, "Amanda grew up in a family that struggled to put food on the table so she knows first hand the struggles of Montana working families...we must put working Montana families ahead of corporate special interests."  A sanitizing dodge, not a denial. Elsewhere in 2014 Senate races, Sen. Kay Hagan hugged President Obama upon his visit to North Carolina, while trying to distance herself from him (she's voted with Obama 96 percent of the time), a new ad from Sen. Mark Pryor intimates that his Republican opponent is soft on Ebola, and Alaska's Republican nominee shoots a television set -- literally -- in a new television spot: