WH: Unlike Some Other People, We Don't View Things Through a Political Lens 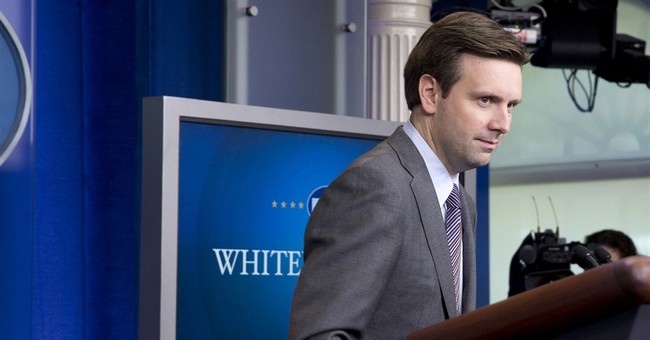 Show of hands: How many of you literally laughed out loud at this instant classic from White House Press Secretary Josh Earnest? (Skip ahead to the 1:37:20 mark of yesterday's eventful briefing for this exchange. UPDATE - It seems as though the White House has taken down this video, but you can view the clip by clicking the Buzzfeed link above):

Oh yes, far be it from this White House to "look at a lot of things" through a "political lens." Team Obama politicizes everything they touch. When attempting to divine the intent behind any given action or choice made by the administration, the surest mechanism for cracking the code is often to adopt a mindset fixated on winning or surviving the immediate news cycle.  It's routinely that simple-minded and short-sighted. The Obama crew is regularly guided by a callow elixir of ideological fervor and political expediency.  Victor Davis Hanson wrote a lengthy piece lamenting the "politicization of everything" last year, and it continues to hold up well today.  The clearest and most cynical example I can think of is the administration's sales pitch and and implementation of Obamacare.  They knowingly offered a parade of utopic, un-keepable promises to the public in order to drag the unpopular legislation across the vote tally finish line, then ensured that critics' vindication wouldn't materialize until after the president's re-election campaign had concluded.  Indeed, the administration delayed a number of key decisions until post-November 2012 for the same reason, recklessly compacting the implementation timeline, causing the roll-out fiasco. As the law's policy outcomes violate presidential vows while harming both consumers and the overall economy, the White House has scrambled to unilaterallydelay, alter, postpone and waive various provisions, "fixes" that expire...beyond the next election cycle.  It's all done "through a political lens."

Interestingly, Earnest's answer above came in response to a question about the optics of Obama condemning the beheading of an American citizen by an ascendant fighting force of Jihadi savages before promptly returning to the golf course. Days earlier, the president's team was criticized for tweeting that "a good time was had by all" at an opulent party on Martha's Vineyard in the midst of racially-charged riots in Ferguson, Missouri.  Obama also came under fire for jetting to a pair of fundraisers right on the heels of commenting on the downing of a jumbo jet by Russian-backed rebels over Ukraine, killing hundreds of civilians.  The most recent disconnect between the president's actions and the gravity of world events was glaring enough to attract the scorn of people (including yours truly) who typically find golf/vacation criticisms to be petty and frivolous:


Struggling to reconcile my belief that critiques of presidential hobbies/vacations are stupid with my annoyance at Obama's golfing today.


Agreed. Critiques of presidential vacations are dumb. But golfing today is in bad taste. Not sure how to reconcile: http://t.co/4Mlq5dL2c7


"Jarring," declared USA Today's Susan Page.  They should have seen it coming, intoned NBC's Chuck Todd.  The irony is that in these cases, Earnest is telling the truth. The White House has decided not to give a damn about 'optics' failures in situations like this.  If they weren't going to cancel a Vegas fundraiser the day after an ambassador was assassinated by terrorists in 2012, they sure as hell aren't going to let a mere beheading disrupt Obama's plans while he's on holiday.  Contra Todd, they did see this uproar coming. They just didn't care. They've made the calculation that they'll get dinged in certain quarters, but that most people will never hear about it.  Which is why White House aides felt free to serve up this garbage in response to early complaints about the decapitation/golf juxtaposition:


"Aides said the golf game did not reflect the depth of his grief over Mr. Foley..."

His inner grief was overwhelming, you see: 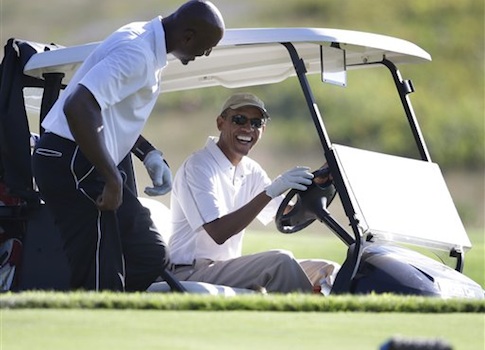 In case you're wondering, yes, that photo was snapped during the round immediately following his beheading statement.  Our colleague, Allahpundit, has been snarkily describing Obama as "semi-retired" in recent weeks.  I suspect he's only half kidding.
Why One Union That Endorsed Biden Already Has Buyer's Remorse
Leah Barkoukis