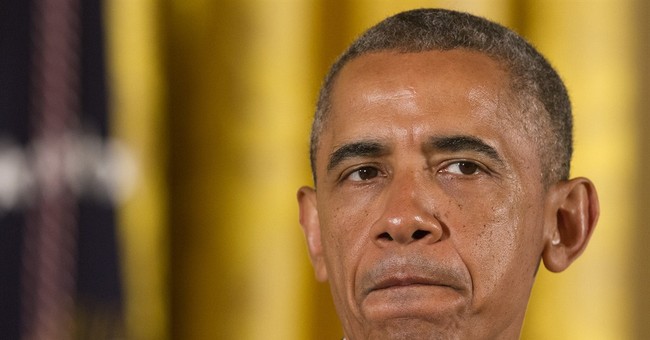 A new national survey conducted by the Associated Press suggests that illegal immigration and the border crisis could be morphing into major political liabilities for Democrats ahead of the midterm elections. Key take-aways:

(1) President Obama's approval/disapproval rating on the issue (considered "extremely" or "very" serious by 67 percent of voters) is underwater by...37 points:

(3) By a nine-point margin (44/53), Americans say the United States government does not have a "moral obligation to offer asylum" to people who come here to "escape violence or political persecution in their home country." The public is split on whether minors who say they're "fleeing gang violence" should be treated as refugees -- with a small majority (46/52) saying "no." A similar majority (51 percent) agree with Republican efforts to change a 2008 law "so that all children entering the country illegally are treated the same as those from Mexico or Canada and can be sent back to their home countries" without a deportation hearing. Only 18 of respondents percent oppose this idea.


(4) The favor/oppose gap on approving of a path to citizenship for illegal immigrants who are already in the country has narrowed to five points (51/46); it was 15 points in January (56/41).


Meanwhile, vulnerable Democrats are anxiously eyeing reports that President Obama is poised to expand his 2012 'DREAM Act'-style deportation delay decree to include millions of illegal immigrant adults. The former executive action has been cited as one of the primary drivers of the current unaccompanied minor crisis. The latter possibility would likely ramp up the amnesty rumor magnet. It would also enrage Republicans. But based on the numbers above, it might also offend much of the electorate, as well. Red and purple state Democrats are therefore urging restraint -- not because they're vigilant guardians of the rule of law, mind you, but because their political careers hang in the balance:

The Senate’s most vulnerable Democratic incumbents, caught in the crosscurrents of immigration reform, are urging President Barack Obama to show restraint in using his executive powers to slow deportations. Obama is locked between a progressive base demanding aggressive action and voters in conservative states that will decide the fate of the Senate and hold outsized importance in shaping the final two years of his presidency. The White House is weighing how far it can go, legally and politically, in delaying deportations for millions of undocumented immigrants. His decision will be announced just weeks before Election Day, and the timing is precarious for Democrats running in conservative states, where any reminder of their ties to the unpopular president is problematic — let alone for a decision as sweeping and controversial as what the White House is considering.


Obama himself has slapped down the idea that he has the legal authority to unilaterally overhaul the federal deportation regime via executive order. Watch how he responded to immigration activist hecklers last year:


"The easy way out is to try to yell and pretend that I can do something by violating our laws. What I'm proposing is the harder path, which is to use our democratic process."

Then again, Ed's been known to get in line and salute mighty abruptly in the past. Oh, one more thing. According to the AP poll, O's approval on immigration is (31/68). How's his overall number looking?


Gallup: Obama job approval now sixteen points underwater at 39-55, just one point above his all time low of 38 in 2011.