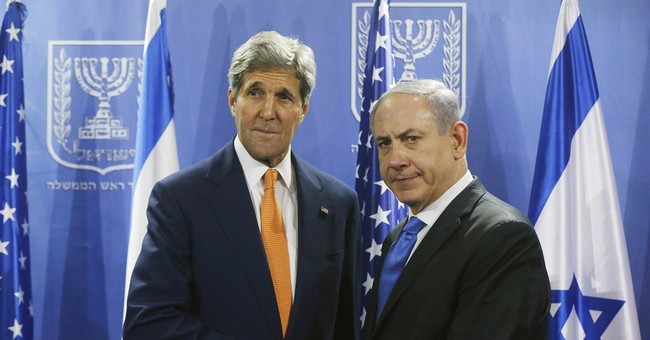 Via Noah Rothman, an excruciating interview between MSNBC's Joy Reid and Israeli spokesman Mark Regev. To clarify, Reid's questions make this interaction an excruciating spectacle for informed viewers. Regev's patient and thorough answers are a model of of effective professionalism. Skip ahead to 1:45 and soak it in. Brief commentary to follow:

Reid's questions are laden with faulty premises, with the most obvious error being her assertion that Gaza is "occupied" by Israel. In fact, Israel unilaterally ended its occupation of Gaza in 2005 as a gesture of good faith, forcibly uprooting settlements and withdrawing entirely from the territory. That olive branch was greeted with violent madness, as the local population promptly and decisively elected a terrorist organization -- Hamas -- to represent them. Hamas then overthrew the Palestinian Authority in Gaza, leading to Israel's blockade. Israel's generosity has been repaid with the firing of thousands of rockets at its civilians over nearly a decade, including the bombardment that served as the catalyst for the current conflict. Reid presses Regev on why Israel is attacking hospitals and bulldozing private homes. He responds with the depressing truth: The IDF is forced to use surgical strikes against non-traditional targets because Hamas is using those locations as staging grounds for their terrorist activities. And they're using their civilians as human shields, urging them to disregard Israel's humanitarian pre-attack warnings, which sometimes even entail leaflets with maps identifying safe zones.

Reid demands to know where displaced Palestinians should go, and who is responsible for their fate. Hamas is responsible for their fate. Hamas started this war. Hamas shoots rockets at civilians from clinics and schools. Hamas puts children in harm's way to protect their stockpiles and leaders. Hamas inculcates its population with hateful bigotry from the earliest age. Yet every accusatory question from the MSNBC host is premised on Israel's culpability. What happens to the people who live in houses above the terror tunnels Israel destroys? There may not be a great answer to that challenge, but the cause of that dilemma is, you know, the terror tunnels -- which Hamas builds to smuggle weapons and surreptitiously enter Israeli territory, often with murderous intentions (see below). What is Israel supposed to do? Not attack the enemies who are trying to kill their civilians? Not destroy the tunnel network? It's a cliche at this point, but it's true: If Palestinians renounced violence and laid down their arms tomorrow, they would have their own state, and achieve peace. If Israel did the same, she would be annihilated.

The Los Angeles Times has a front page story today positing that the present Gaza blockade is causing and fomenting terrorism. Actually, the blockade was only imposed when Hamas proved itself to be unable to resist terrorism. Its purpose is not to cut off humanitarian supplies or legitimate commerce -- both are permitted to pass through -- but to interdict munitions re-supply shipments from sources like Iran. People got excited yesterday when a Hamas leader said his group was open to a truce. The problem is that his peace offer came with strings attached, the primary one being the lifting of the anti-weapons blockade. Hamas wants Israel to lunge for a temporary quiet at the price of allowing terrorists to re-arm. Such a concession would be counter-productive and short-sighted, and Israel realizes this. The Washington Post editorial board can't understand why many of their media brethren stubbornly refuse to cover the Israel-Palestinian struggle based on a fair assessment of the parties' morals and motives:

Hamas’s offensive tunnels should not be confused with the burrows it has dug under Gaza’s border with Egypt to smuggle money, consumer goods and military equipment. The newly discovered structures have only one conceivable purpose: to launch attacks inside Israel. Three times in recent days, Hamas fighters emerged from the tunnels in the vicinity of Israeli civilian communities, which they clearly aimed to attack. The ­concrete-lined structures are stocked with materials, such as handcuffs and tranquilizers, that could be used on hostages. Other tunnels in northern Gaza are designed for the storage and firing of missiles at Israeli cities. The resources devoted by Hamas to this project are staggering, particularly in view of Gaza’s extreme poverty. By one Israeli account, the typical tunnel cost $1 million to build over the course of several years, using tons of concrete desperately needed for civilian housing.

By design, many of the tunnels have entrances in the heavily populated Shijaiyah district, where the Israeli offensive has been concentrated. One was found underneath al-Wafa hospital, where Hamas also located a command post and stored weapons, according to Israeli officials. The depravity of Hamas’s strategy seems lost on much of the outside world, which — following the terrorists’ script — blames Israel for the civilian casualties it inflicts while attempting to destroy the tunnels. While children die in strikes against the military infrastructure that Hamas’s leaders deliberately placed in and among homes, those leaders remain safe in their own tunnels. There they continue to reject cease-fire proposals, instead outlining a long list of unacceptable demands.


Exactly. 'Blame Israel First' agitators are either ignorant of these facts, or they don't care to know them. And far too many of them simply hate Jews, which no amount of empirical evidence will reverse.