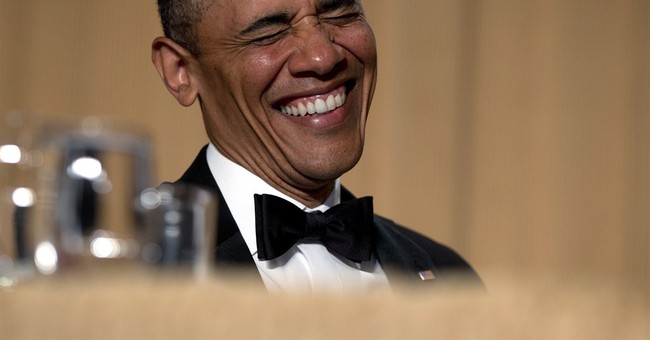 As the House Select Committee on Benghazi came into clearer focus several weeks ago, national Democrats feigned outrage over some Republicans fundraising off of the issue. The DCCC was especially exercised and indignant about it. While I agreed that the GOP shouldn't link fundraising appeals to a serious investigation, I pointed out that Democratic Senator Elizabeth Warren also appeared to raising funds by exploiting the Benghazi controversy. Her office has since clarified that it was a misunderstanding -- a "donate" button appears on every page of her website, so the solicitations for cash in proximity to her post on the 9/11/12 terrorist attacks were incidental, not intentional. Next, a left-wing group began explicitly raising money by attacking Republicans' investigative efforts on Benghazi, puncturing the Left's faux fury. And now we've come full circle: President Obama assailed GOP efforts to address unanswered questions on Benghazi at a high-dollar fundraiser for...the DCCC:

Obama told a DCCC fundraiser last night: "Congress is wasting time investigating the Benghazi affair and focusing on the troubles" with ACA.

Pres Obama tells DCCC fundraiser about #Benghazi, #Obamacare: It’s not serious. It’s not speaking to the real concerns that people have.


Will the DCCC condemn the DCCC's fundraiser, at which the President of the United States politicized and raised buckets of cash off of the Benghazi massacre? (The committee has done its share of apologizing lately -- what's one more?) And in what universe are criticisms of Obamacare's broken promises, rising costs, and limited access "not speaking to the real concerns" of ordinary people? I'd wager that millions of Americans would beg to differ, with additional pain on the way for more consumers. Numerous polls have shown that for every person the law has helped, at least two have been hurt by it. I wonder how Obama's imperious, dismissive analysis would play with, say, these folks:

The president says the national debates about Benghazi and Obamacare are over, and I'd bet the cozy Chardonnay and caviar crowd he addressed last night nodded approvingly -- even as some high-end Democratic donors are reportedly growing "exasperated" with the ineffectual and out-of-touch president they've bankrolled. Supermajorities of the American people, however, disagree on both counts.