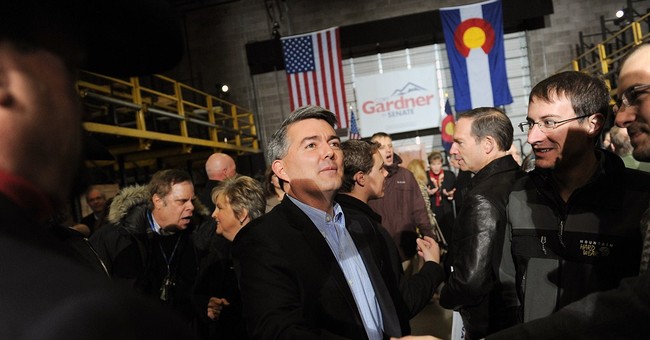 We wrote about this race just yesterday, in the context of incumbent Mark Udall's new ad claiming that Republican Cory Gardner is on a "crusade" to "outlaw" birth control. The Gardner campaign responded with a scathing statement:


“After nearly two decades in Washington, Senator Udall has decided to launch his reelection campaign with a negative, misleading attack ad because he has no record of accomplishments. While Coloradans sound the call for new leadership, Senator Udall continues to lie about Cory Gardner’s record while distorting his own. If Senator Udall trusts and respects women, and all Coloradans for that matter, then he should not have lied to them about keeping their healthcare plans and doctors.”


A local fact-checker called the ad's claims about birth control "debatable," with the Gardner camp noting that the GOP candidate had supported legislative language to protect contraception -- a far cry from being on a zealous mission to criminalize it, as the ad implies. Gardner has also abandoned the issue position Team Udall is using to advance their claim. As I advised yesterday, Colorado Republicans need to tackle this allegation squarely with on-air ads. Gardner needs to make his position crystal clear, and if he's so moved, he may draw attention to his opponent's extremism on abortion. At stake are women voters, who split on abortion, but who don't take kindly to male candidates they are led to believe are hostile to women's health issues. A new poll from Quinnipiac shows this race is a dead heat, with the candidates separated by a statistically-insignificant single point in the mid-40s. Three factors are keeping Udall afloat:


(1) Women. Udall is trying to exploit the gender gap, which currently gives him a 17-point advantage (52/35) with female voters. If Gardner can close this number even a little bit, he'll be in a strong position to win. That's why the birth control attacks must be blunted, and swiftly.

(2) Young voters. Fully 72 percent of 18-29 year olds say they have no opinion of Cory Gardner. Of those who do, the Republican actually scores a (+3) favorability rating. But he's by and large an unknown commodity within this demo, and he's getting trounced by the incumbent, trailing by 31 points (56/25).

(3) Independents. Gardner is actually winning this group, but by a narrow two points. Given the trend of independents breaking fairly heavily for the GOP this year, Gardner must win this cohort by more than a couple of percentage points. Part of doing so requires him successfully introducing himself as a plausible Senator -- and that's why Udall's going to play the "extremist" card early and often.


The poll is also packed with very gloomy data points for the Democrat incumbent:


(1) By a six point margin, voters say Udall does not deserve to be re-elected. The "yes" camp only encompasses 40 percent of voters, a real danger zone for a sitting office holder.

(2) The top two issues in the race are the economy and healthcare. Gardner holds substantial leads on both issues; 13 points on the former, and 21 points on the latter.

(3) Barack Obama is deep underwater in the Rocky Mountain State. His overall approval rating is (38/57), with disapproval reaching 60 percent on the economy and foreign policy. Just 24 percent of Coloradans are at least somewhat satisfied with the overall direction of the country.

(4) Obamacare is enduringly unpopular in the state. In this poll, it's upside-down by 22 points (37/59), virtually unchanged across months of polling. The so-called "winning streak" hasn't made a dent.


A separate poll commissioned by the US Chamber of Commerce gives Gardner a razor-thin lead, (44/42). This survey's data largely confirms the Q-poll's findings:


A slight majority, 51 percent, said it is time to give a new person a chance, compared with 35 percent who said they would automatically vote to reelect [Udall]...A generic Republican Senate candidate would lead a generic Democrat by 9 points, 49 percent to 40 percent. The number grows into double digits if it’s a Republican against a generic Democrat “who will help President Barack Obama and the Democrats in the Senate” pass his agenda. Obama is viewed unfavorably by 55 percent, with 47 percent saying they strongly disapprove, in the poll. And 63 percent said the country is seriously on the wrong track, compared with 29 percent who say things are moving the right direction....Gardner’s voters are most passionate: he’s up 8 points among those who have an opinion of both candidates, he leads by 5 points among those who say they will “definitely” vote and he’s up 20 points among those who say that, on a 1-to-10 scale, they have a 10 level of interest. Six in 10 of likely voters oppose Obamacare, as 51 percent say they are “strongly” against the law.


Coloradans bristle at the idea of sending someone to the Senate to "help President Obama and the Democrats." That's bad news for Mark Udall, who votes the Obama line a staggering 99 percent of the time. The fundamentals for a Gardner victory are clearly falling into place. To maintain his position and ultimately eclipse Udall, he'll need to pass the initial threshold test of acceptability, which is why the Udall camp is already airing ads trying to define him as a gargoyle. Gardner is a sharp, funny, winsome guy. He's harder to pigeonhole than many politicians -- but Udall's political survival rest on doing just that.