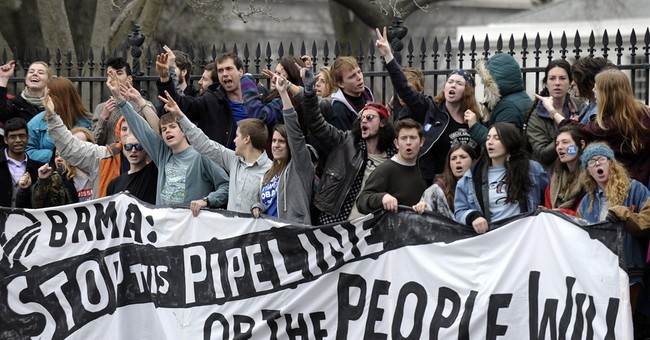 Allow me to say right off the bat that I was wrong. Mea culpa. I predicted that the Obama administration would finally approve the Keystone pipeline project sometime this fall, tossing a political bone to vulnerable Democratic Senators who've been begging the president to stop dragging his feet. As we learned over the holiday weekend, Mary Landrieu and friends won't get their wish. The White House is again hunkering down and postponing a decision until early 2015, and possibly beyond -- leaving thousands of American workers in the lurch. During his obnoxious Obamacare press conference last week, the president said that Washington must stop debating the health law, and move on to more pressing matters like jobs and the economy (fronts on which Obamacare is inflicting damage, incidentally). He even called for additional "investments" in American infrastructure, which he said would "improve our economy for the long term." Literally the next day, he swatted down a hugely popular job-creating infrastructure project. As Dan wrote earlier, MSNBC's Morning Joe crew seemed perplexed by the move, which liberal host Mika Brzezinski called "hard to defend." The Wall Street Journal's editors agree, but they aren't puzzling over what happened. Follow the money:

The Koch brothers may get the media attention, but the billionaire getting the most political bang for his buck is Tom Steyer. The hedge-fund politico has pledged to raise $100 million to help Democrats keep the Senate, and on Friday he received a major return on his investment when the State Department again delayed its decision on the Keystone XL pipeline ... The real reason for the delay is Democratic politics. Mr. Steyer and the party's liberal financiers are climate-change absolutists who have made killing Keystone a non-negotiable demand. But the White House doesn't want to reject the pipeline before November because several Senate Democrats running for re-election claim to favor it. We say "claim" because Louisiana's Mary Landrieu and others can't even get Majority Leader Harry Reid to give them a vote on the floor.


After the decision was announced, Steyer danced in the endzone over the politicized, anti-jobs victory he purchased. Obama extended a middle finger to Senate Democrats who back the pipeline, although he's providing them the "delay" fig leaf, allowing them to continue campaigning in favor of the popular idea. But America Rising has it exactly right:


The White House's actions, and Harry Reid's obedient obstruction of votes on the question, expose Landrieu, Pryor, Begich, Hagan et al as powerless within their own party. The party's liberals can count on the votes of these self-stylized "moderates" when they're really needed (see: Obamacare), but will blithely ignore the blue dogs when they decline to toe the Obama line. These Senators can brag about "standing up to the White House" on Keystone back home, but the proof is in the pudding. They're Obama rubber stamps when it counts, and wield precious little influence on important issues like Keystone -- to the point that they can't even persuade their own leadership to schedule votes. It also goes without saying that although they'll profess to be angry and disappointed about the recent delay, these incumbents will be more than happy to take campaign cash from the Steyers of the world. Democrats love their "out of state billionaires." In any case, the American people strongly support construction of the pipeline, as do prominent labor unions whose members want work. Several unions are pounding away at the White House, recognizing that they've been demoted on the totem pole of liberal special interests:

A top labor union blasted the Obama administration on Friday over what it described as a nakedly political decision to once again delay a decision on the construction of the Keystone XL pipeline. Terry O’Sullivan, general president of the Laborers International Union of America (LIUNA), called the move “gutless” and a “low blow to the working men and women of our country.” The State Department announced on Friday that it would push back its decision on the pipeline until after the midterm elections in November.


“The actions by the Obama Administration to further extend the review process for the Keystone XL pipeline is a cold, hard slap in the face for hard working Americans who are literally waiting for President Obama's approval and the tens of thousands of jobs it will generate. Despite this administration’s own findings that the Keystone project will result in significant economic benefits to our country, President Obama has placed politics over substantive policy that only serves to advance the agenda of well funded radical environmentalists....It's ironic that at the same time billionaire conservatives are coming under increasing scrutiny and criticism by the left for their involvement in politics, there is nary a word about the political spending by liberal billionaires that negatively impact the job prospects and livelihoods of working class Americans.”


That last line is an surprisingly overt jab at Harry Reid. I'll leave you with remarkably lifelike talking points robot Debbie Wasserman Schultz insisting that the president's Keystone punt had nothing at all to do with politics, followed by John Hardwood of CNBC and the New York Times asserting precisely the opposite: